With Amazon blowing away expectations and guiding to solid revenue growth, it was all up to the world’s biggest company, AAPL, to complete the tech giant earnings parade. And AAPL did not disappoint, reporting top and bottom line results which both beat, while easing concerns that supply chain snags and a shaky economy would ravage the tech giant’s sales.

Here are the details: 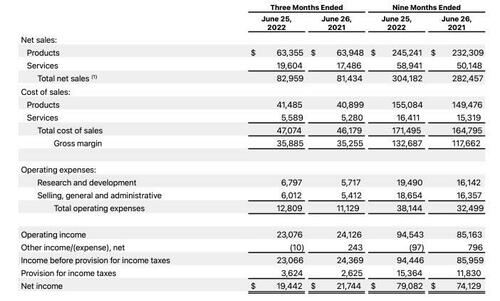 Some more details from the quarter:

Commenting on the results, Apple’s CFO Luca Maestri said that “we set a June quarter revenue record and our installed base of active devices reached an all-time high in every geographic segment and product category. During the quarter, we generated nearly $23 billion in operating cash flow, returned over $28 billion to our shareholders, and continued to invest in our long-term growth plans.”

Meanwhile, in an interview with Bloomberg, Tim Cook said that the company will be “deliberate” in its spending amid the economic downturn, but will continue to invest: “We believe in investing through downturns. We’ve always done that and have found that made us stronger on the other side,” Cook said. “That’s the frame of mind we go into. Obviously we are being deliberate in our decisions of where to invest.” This essentially confirms that while AAPL will slow hiring and spending in some areas, it will continue to invest in hot areas like AR and AI.

Cook also said that Apple saw “significant improvement” in June for both supply and demand in China and that the company had “really strong results” ahead of the June 18 shopping holiday in China.

Finally, looking ahead, while AAPL does not give formal guidance, Cook said that he expects revenue to accelerate in the fourth quarter despite “some softness.” He conceded that macroeconomic headwinds hurt the third quarter, particularly on wearables and digital advertising.

Eslewhere, there was no new buyback announcement after last quarter’s $90BN blockbuster, and the company just declared a simple cash dividend of 23c to shareholders. Of note, AAPL repurchased $22BN in stock in fiscal Q3, in line with the historical buyback pace. 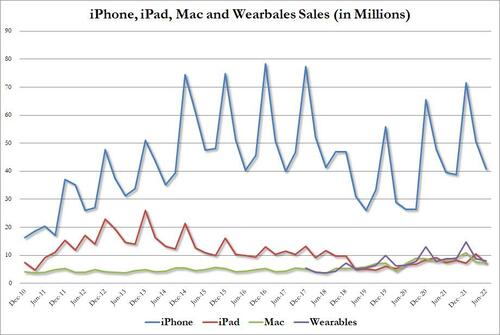 As noted above, Apple also reported another solid, if not blowout, quarter for Service Revenues – meaning Apple TV+, Apple Arcade, Apple Music and iCloud subscriptions – which rose to $19.60BN, missing expectations of $19.75BN and below the record high hit last quarter… 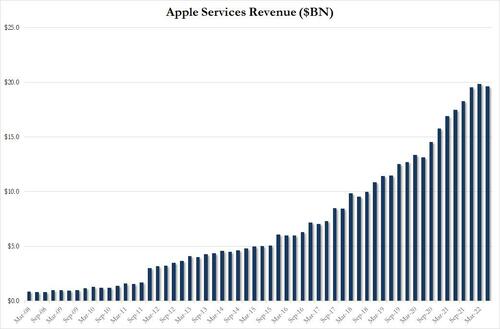 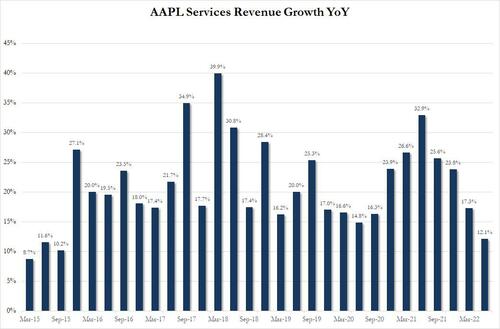 The geographic breakdown was also solid: most areas showed a boost in sales, apart from a minor drop in China – which was far better than the plunge many had expected – and a notable decline in Japan. The Americas remains AAPL’s largest sales area with $37.5 billion of revenue in the quarter. China was down to $14.6 billion, dropping 1.1%, which however was well below consensus estimates as many had feared China’s lockdowns would adversely impact both sales and supply chains – particularly around the iPhone. 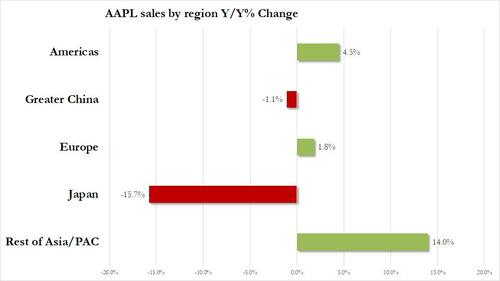 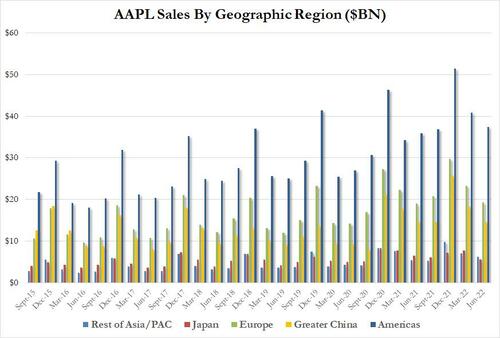 And while the results were not stellar by any stretch, they were certainly strong enough to push the stock notably higher, although as a reminder, last quarter the conference call clobbered the stock price so be careful for surprises out of the media call. 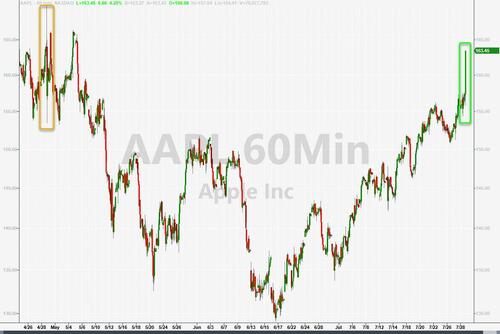