With Chinese markets disappointed by the lack of a stimulus announcement during yesterday’s July Xi-chaired Politburo meeting, which sparked a broad selloff in tech and property shares and sent the Hang Seng China Enterprises Index of stocks 2.8% lower on Friday, taking its July loss to over 10%…

… Beijing, finding itself increasingly trapped by the continued deterioration in the country’s massive housing sector especially in the aftermath of the recent mortgage revolt, is reportedly considering confiscation (i.e., nationalization) next: according to Bloomberg, China is considering a plan to seize undeveloped land from distressed real estate companies, using it to help finance the completion of stalled housing projects that have sparked mortgage boycotts across the country. 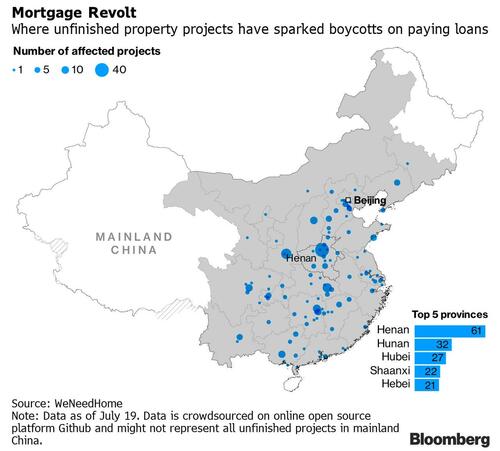 The proposal would take advantage of Chinese laws allowing local governments to wrest back control of land sold to real estate companies if it remains undeveloped after two years, without compensation. That would give authorities more leeway to direct funds toward uncompleted homes, potentially to the detriment of creditors who would lose claims on some of developers’ most valuable assets.

According to Bloomberg sources, in a typical scenario the government would seize land from a distressed developer and give it to a healthier rival, which would in turn provide funding to complete the distressed developer’s stalled projects. The government could also rezone the seized land in some cases to increase its value, the people added, asking not to be named discussing private information.

The proposal is one of several measures under consideration as Xi Jinping’s government tries to prevent turmoil in the housing market from fueling social unrest and derailing the broader economy. Last week, we learned of a dedicated bailout fund meant to stabilize the housing system. The focus on completing projects is the latest sign that policy makers are prioritizing homeowners over bondholders, who have been burned by a record number of defaults by real estate giants including China Evergrande Group.

It is still unclear if the confiscation proposal will get a green light from Chinese leaders; it is currently under discussion by the Ministry of Housing and Urban-Rural Development with other regulators.

While in 2021 Beijing appeared to take the sharp deterioration across the property sector almost whimsically, perhaps Chinese leaders finally realized what’s at stake here: the numbers are truly staggering.

According to Bloomberg, outstanding individual mortgage loans hit 38.86 trillion yuan as of the end of June, growing at a rate of 5.1% annually. Meanwhile, total outstanding property development loans at June were 12.49 trillion yuan while the total outstanding loans to the property sector were 53.1 trilion yuan. In other words, not even China’s state-owned banking system would be immune to contagion that spreads to broader mortgage sector.

It’s not just traditional mortgages that are at risk: China’s top 100 developers owned land parcels valued at 42.5 trillion yuan ($6.3 trillion) at the end of last year, according to China Real Estate Information Corp. Many of them borrowed heavily to buy the land, in hopes that prices would continue rising. That bet is now souring after a multi-year government clampdown on real estate leverage that has weighed on home prices, land values and new residential property sales.

The result is that many distressed builders are sitting on land they’ve been unable or unwilling to develop. Just 37% of land parcels auctioned in the first batch of centralized land-bidding last year have started work as of March-end, according to a recent Caixin report. About 16% of the second batch were being developed, the newspaper said.