After last Friday’s close, when stocks just completed their best month since November 2020 following a torrid week which saw risk assets explode higher after the US entered a technical recession, after the Fed hiked 75bps, and even after PCE came in hotter than expected, as traders became convinced that a Fed pivot is coming, we published a must-read note from BofA’s Michael Hartnett – Wall Street’s most accurate and bearish analyst – who warned that while a dovish Fed pivot is certainly on the calendar, it’s not coming nearly as fast as the market expects it, and cautioned that there will be at least one more trapdoor in risk assets before Powell is forced to unleash the monetary firehose, most likely some time in early 2023 (Hartnett also detailed the conditions for the real pivot and how to gauge when to sell just ahead of it; our take on his note is is here while his full must read analysts is available to pro subscribers at the usual place).

And while some disagreed, most notably Morgan Stanley which said that “bad is good ” again… 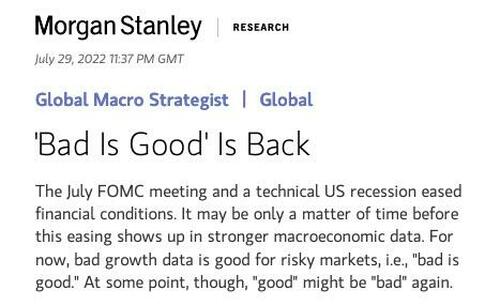 … others sided with Hartnett, starting with former Treasury Secretary Lawrence Summers had some very harsh words over the weekend suggesting the Fed is engaging in “wishful thinking” in what it will take to tame inflation and that “Jay Powell said things that, to be blunt, were analytically indefensible ….” and that “…there is no conceivable way that a 2.5% interest rate, in an economy inflating like this, is anywhere near neutral.”

He echoed a similar complaint by Bill Ackman who, true to form, took to twitter to explain to the Fed how it is doing a terrible job by not unleashing a depression and instead has led to multiple alleged margin calls on what appears to be another massive treasury and/or Eurodollar short position judging by how often Ackman has slammed Powell for not hiking by… say… .10%.

worse and his job more difficult. The Fed should clarify how it has determined that we are indeed at neutral. Greater clarity would be helpful for all.

But wait, there’s more: the groupthink parade – because really this is just a bunch of axed hedge fund managers and career economists failing to grasp what the market clearly has realized, namely that if you hike enough you will get a recession – expanded over the weekend when even the Fed’s biggest dove, Neel Kashkari, said that the Fed is “committed to doing what’s necessary to bring down demand” in order to reach policy makers’ 2% long-term inflation goal, a target that remains far off.

“We are committed to bringing inflation down and we’re going to do what we need to do,” he told CBS’s “Face the Nation” in an interview on Sunday. “We are a long way away from achieving an economy that is back at 2% inflation, and that’s where we need to get to.”

Inflation that has continued to exceed the Fed’s expectations is “very concerning,” Kashkari said. Faster cost-of-living increases are becoming more broad-based and aren’t limited to just a few categories, and that explains why the Fed is “acting with such urgency to get it under control and bring it back down,” Kashkari, who is a non-voting member this year and thus his opinion is even more irrelevant than usual, said.

Faster inflation is being driven by supply chains disrupted by the war in Ukraine and other factors, Kashkari said, adding that while wages are increasing, they’re not keeping pace with surging goods prices. So for most Americans, “real incomes are going down,” and there’s no “self-fulfilling spiral” of wage-driven inflation yet, he said.

“Families are finding it increasingly hard to make ends meet,” said Kashkari, who served in a key financial stability post at the Treasury Department during the 2008-2009 global crisis. “When they go to the grocery store, when they buy necessities, they’re not able to buy as much because they’re getting a real wage cut.”

Kashkari said that the Fed will do everything it can to avoid a recession, while acknowledging that it doesn’t have a “great record” of being able to do so.

“Whether we are technically in a recession or not doesn’t change my analysis,” Kashkari said. “I’m focused on the inflation data. I’m focused on wage data. And so far, inflation continues to surprise us to the upside. Wages continue to grow. So far, the labor market is very, very strong.”

Finally, it was Bill “edible iPads” Dudley, who joined the circus bandwagon this morning, and in a Bloomberg oped, that other former Goldman banker (Goldman is best known for populating central banks with its alumni, whether it is Dudley, Kashkari, or countless others) and NY Fed president echoed what he said in an interview last week, warning that “wishful thinking won’t help The Fed beat inflation.”

This wishful thinking is both unfounded and counterproductive.

The market’s exuberance appears to stem in part from Jerome Powell’s latest news conference, in which the Fed chair observed that growth had slowed, didn’t commit to another 75-basis-point rate increase in September and suggested that monetary tightening might curb excess demand for workers without doing too much harm to those currently employed. This has fueled speculation of a “pivot” to smaller interest-rate increases, with some even arguing that the Fed has done enough already.

Don’t be confident about such an outcome. For one, Powell repeatedly referred to Fed officials’ projections from June, which show the federal funds rate reaching 3.8% in 2023 — more than 50 basis points higher than what financial markets currently expect, and difficult to reconcile with the pivot hypothesis.

As regards the labor market, monetary policy tightening is far too blunt a tool to target demand only for workers not yet employed. It affects all parts of the economy that are sensitive to interest rates, and hence inevitably reaches workers who have jobs, too. The greater the excess demand for labor, the more tightening the Fed must do and the more people will be put out of work. The latest reading from the employment cost index underscores how tight the labor market is: Wages for private sector workers are up 5.7% from a year earlier. Also, Fed officials believe that the unemployment rate consistent with price stability is significantly higher than it was during the last economic expansion. This means more jobs will need to be sacrificed to get inflation under control.

Some argue that the Fed doesn’t need to induce such job losses — that inflation will subside on its own along with the supply disruptions created by the pandemic and the war in Ukraine. But the central bank must contend with the world as it is: If demand exceeds supply, the Fed must act to reduce the former even if the latter is constrained. Beyond that, supply disruptions are far from the whole story. Inflation pressures have broadened, as evidenced by the 6% year-over-year increase in the Cleveland Fed’s median consumer price index, up from 3.8% six months earlier.

All told, the outlook hasn’t changed. Inflation is too high, the labor market is too tight and the Fed must respond — most likely by pushing the economy into an actual recession, as opposed to the two quarters of minor GDP shrinkage that has occurred so far. Wishful thinking in markets only makes the job harder, by loosening financial conditions and requiring more monetary tightening to compensate.

The biggest mistake the Fed can make is to fail to push inflation back down to 2%. Fortunately, Powell recognizes this, even if he understates how difficult the task will be given the economic environment and the Fed’s very late start.

Remember what Dudley said back in April – Investors should pay closer attention to what Powell has said: Financial conditions need to tighten. If this doesn’t happen on its own (which seems unlikely), the Fed will have to shock markets to achieve the desired response.

For now, the financial conditions index has rebounded back to the same levels it was at in April (relatively easy), but as the chart below shows, The Fed has seemingly been willing to only allow a ratcheting down of tightness – presumably because it feels the market and the economy couldn’t take any faster hawkishness… 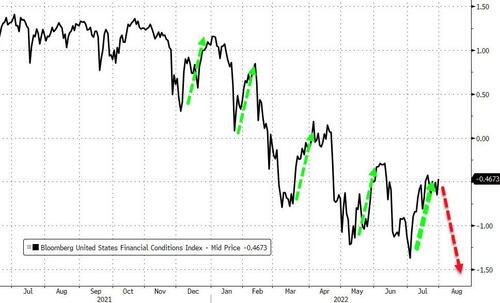 As Dudley concluded in April: This would mean hiking the federal funds rate considerably higher than currently anticipated. One way or another, to get inflation under control, the Fed will need to push bond yields higher and stock prices lower.

So yes, those short bonds and various secondary (and former) Fed bankers are  making the case that the Fed will (or at least should) keep hiking until inflation finally relents. There are two issues with that:

In other words, Democrats have made their political calculus (as a reminder Biden is a superfluous and very old figurehead who doesn’t actually matter when it comes to actual decision-making), and have realized that at this point a recession would poll far worse than inflation.

Expect Biden to eventually figure this out in the next 3-6 months, and Powell to get the official memo, at which point the real dovish pivot can begin. Assuming, of course, Nancy Pelosi doesn’t start World War 3 between China and the US in the next 48 hours.