“No One Is Positioned For Any Good News:” Record Shorting In Tech Ensures ‘Most Hated Rally’ Will Continue

July was a tremendous month for stocks, it was also a mediocre (at best) month for hedge funds which not only underperform the S&P when stocks slide (as they did during the crashes of 2020 and early this year), but also underperform the broader market during sharp squeezes like the one that took place in July, prompting some to ask just what is the point of paying someone 2 and 20 to some overweight billionaire to always underperform.

The question of hedge fund utility becomes that much more pressing when one reads in the latest Goldman Sachs Prime Services hedge fund weekly report that while the GS Equity Fundamental L/S Performance Estimate rose +0.57% between 7/22 and 7/28 (roughly a third the performance of broader – and free – MSCI World TR +1.74%), this return was driven almost entirely by beta of +0.56% (i.e., market exposure), with alpha of just +0.01%.

In other words, not only can’t hedge funds generate alpha, they can’t even keep up with the market’s own beta! That will cost 2 and 20, please.

It gets worse; much worse… because while growth and tech names have been screaming higher in the past month, with some names such as Tesla now up a whopping 50% from their May lows (!), instead of capitulating on their market crash bets, hedge funds have been doubling down, and as the following stunning chart from the latest Goldman Prime note (available to pro subscribers) shows, hedge funds have been doubling down on failed bearish bets by short, shorting, and then shorting some more until the short MV as a % of Gross MV line has fallen right off the chart. 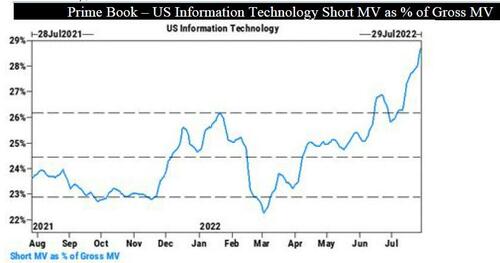 As GS Prime puts it: “Information Technology experienced strong short selling momentum (particularly within the US), and was the most net sold sector on a global basis.”

Translation: what the same Goldman recently dubbed the “most hated rally” is set to continue for a good while, because as noted over the weekend, fears of a worst case scenario have not materialized and instead both Fed and ECB easing is now on deck as things are only set to get better.

Others, such as Thomas Hayes, chairman at Great Hill Capital, agree: “No one is positioned for any good news.” He points to cash levels that are at the highest since 9/11, and recession fears at the most pronounced since April 2020 and March 2009.

“The stock market is a discounting mechanism, so while we may be in or will have a recession, the market will bottom far before it is declared,” Hayes says. “Managers will have to chase up and panic buy any further unexpected strength.”

Meanwhile, looking at broader market metrics confirms that it’s not just tech that shorts keep piling in: according to the latest CFTC Committment of Traders data, large speculators in the futures market – mostly hedge funds – turned net short on S&P 500 futures contracts in mid-June as the 500-member index plunged to 3,666.77 and have been net-short the futures for six consecutive weeks since then, incrementally boosting their net bearish positions to nearly 238,000 contracts in the latest week, the most since June 2020! 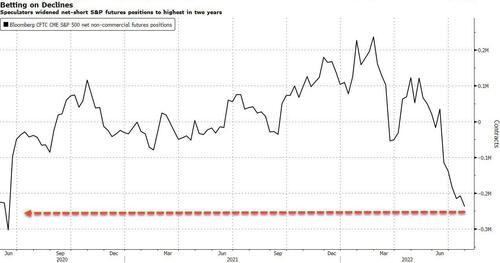 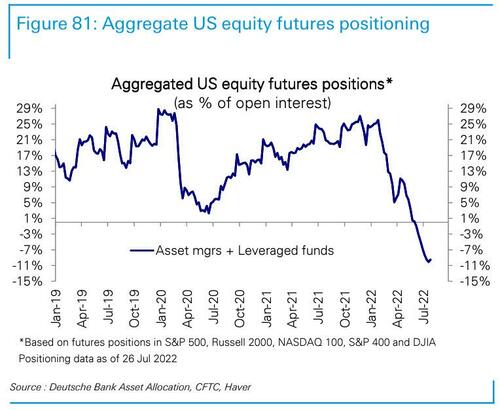 Needless to say, the strategy of doubling down on losing shorts has not paid off (at least so far) with the S&P 500 just clocked its best month in 20 with a 9.1% bounce, while the Nasdaq 100 Index posted its second-best month since 2010, in no small part by forced squeeze as increasingly more bears have been forced to capitulate.

Repeating what we said two week ago in “Investor Frustration Remains Through The Roof As Pain Trade Is Higher“, Dave Lutz, managing director at JonesTrading Institutional Services, said that “last week’s rally was a huge ‘pain trade’, ” adding that “the S&P holding the 100-day moving average is going to be very painful for those short.”

Of course, it’s not that investors didn’t insert money into US stock funds in July — they did, but virtually all of it happened last week, when a $9.2 billion inflow offset three prior withdrawals to flip the monthly scorecard into the positive zone, EPFR Global data analyzed by Jefferies show. The total $4.7 billion inflow into US stocks in the month was less than half of that in June. If anything, this highlights a heated debate about where stocks are headed after July’s run. With half of the S&P 500 quarterly announcements in the rear window, the earnings season is shaping up to be far better than many had feared.

There is one final hail mary for the bear – seasonality. Since 1950, the S&P has essentially been flat in August, both when the index was above or below its 200-day moving average line, data compiled by Oppenheimer show. The S&P has averaged a 0.7% return for any given month. Actually, there is a second potential rescue, and that would be the world war that would begin once Pelosi lands in Taiwan. Then again, with counterparty risk quote a “hot topic” in a global nuclear exchange, it’s most likely that risk will explode… just before the mushroom clouds.