Rabobank: If Pelosi Now Chickens Out And Doesn’t Go To Taiwan, China Will Have Proven It Controls Access To It Of all the things I expected to be doing on a Sunday night as I caught up with the world after a break from markets, watching Twitter playing ‘Where’s Nancy?’ was not one of them. Yet thousands tracked the US Speaker of the House of Representatives heading off as she tweeted, “I’m leading a Congressional delegation to the Indo-Pacific to reaffirm America’s unshakeable commitment to our allies & friends in the region. In Singapore, Malaysia, South Korea & Japan, we’ll hold high-level meetings to discuss how we can further our shared interests & values.” The rumor is she may also appear in Taiwan later this week.

This Nancy Drew Mystery is all over Bloomberg and the Financial Times because China has made clear it will respond if Pelosi does ‘go there’. Indeed, just days after Xi told President Biden that on Taiwan, “those who play with fire will get burned”, the Global Times says “Don’t say we didn’t warn you!“, and the PLA says they are “Preparing for war,” to public approval. Moreover, a missive titled ‘Red Clouds of War Looming Over Taiwan’ doing the rounds among expats in Taiwan (by a De Groot, but not the one in my team), stresses:

“It’s what we’ve all been dreading for years, a massive military attack by an aggressive, repressive, authoritarian China. One minute, we’re peacefully going about our business in this free, democratic, and basically humane country, Taiwan. The next, life is turned upside down. Bombs are dropped and missiles launched, causing death and destruction to people, property – and maybe the entire Taiwan dream. It’s a nightmare scenario both for native-born Taiwanese and for expats who love their adopted home, like waking up to find that the monster has finally crawled out from under your bed.

Terrifying, yes. And also damned inconvenient. If China did attack, the internet would almost certainly be cut off, as well as much of the infrastructure we take for granted. Phone service, electricity, and even water services might be problematic. Food could soon run out, and access to medical services, fire fighters, the justice system, and banking all severely curtailed. Life as we had known it would be over, perhaps even literally over for people living too near a military target. Even those far from the battle zones would be seriously impacted.

But could an attack possibly happen? Will it actually happen? And if so, when and how?”

The article points out the only meteorological windows for a sea attack are October and April and summarizes five logical scenarios:

It thinks #3 is most likely. Some others think #1 or #2. Those thinking ‘none of the above’ should note defense analyst @tshugart3 says three of China’s largest/newest roll-on/roll-off civilian ferries appear to be off their normal routes and are in or have moved south toward the Taiwan Strait – and he is the author of a detailed article on how China has long prepared to use civilian maritime logistics against Taiwan.

This Daily doesn’t know if Nancy Pelosi went long or short the Vix in flight. However, we are not surprised that we are now where we are – heading towards a high-risk, no-win scenario.

The flailing US –where President Biden has Covid (again) and is in one technical definition of recession– can’t back down as it tries to rebuild its leading role in Asia: if Pelosi doesn’t go to Taiwan, China will have ‘proven’ that it is able to control access to it, a red line which it would from then on likely enforce. 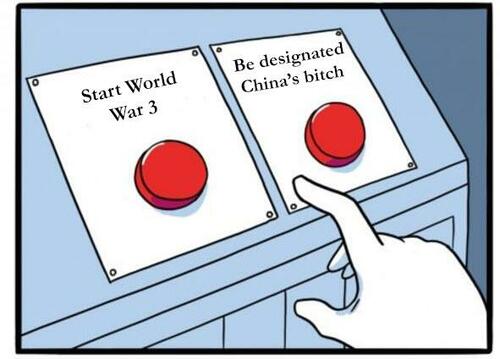 Neither can flailing China back down without losing face ahead of the looming Party Congress: indeed, it is going all in in other regards, e.g., trying to buy a strategic port in the Solomons; and, as its manufacturing PMI dips back below 50 again and the Caixin reading back to 50.4, may seize undeveloped land from property developers. Moreover, it knows that the US has just had to ground its F-35 fleet due to a safety issue. This kind of stand-off, and screw-up, is historically how major wars can start.

The mystery is not where Nancy is, but how the market thinks it will be able to say Nancy ‘drew’ when it is a zero-sum dynamic.

Pretending pressures are not building makes as little sense as it did when ignoring what Putin was doing on the border of Ukraine earlier this year – recall we warned back in January that war over Ukraine was far more likely than markets thought. The problem is that Taiwan and China implies disruption on a scale that would dwarf anything seen so far over Ukraine (where the EU is backing off of its planned oil/insurance sanctions, and Ukraine is stepping up its physical attacks on Russia). Thus the denialism.

Let’s also stress that it’s no mystery at all how we got to this latest crisis. We have warned for years that: globalization doesn’t deliver for enough people; not everyone who globalized shared the US world vision; global debt is too high; QE only makes rich people richer; inequality is ripping societies apart; we are living in a Lalaland of asset bubbles; populism is growing (just look at Italy’s opinion polls); China is also in deep structural trouble; the historical path is rising debt > bubbles > crisis > FX wars > trade wars > hot wars; a Great Power fragmented world order would re-emerge; fascism and communism would be back (and we can add imperialism); food prices would soar; so would energy prices (as the Wall Street Journal warns ‘Energy Prices May Keep Inflation High for Years’); industrial supply chains and logistics matter (and we remain ‘In Deep Ship’ as US port backlogs soar again); inflation isn’t transitory (as the June US PCE deflator was 0.6% m-o-m, 6.8% y-o-y, and 0.6% m-o-m, 4.8% y-o-y core); global interest rates would have to rise sharply; and the US dollar was the only game in town. I will throw in that we also said rates could rise AND some form of QE/MMT happen anyway, perhaps to pay for military spending – and Europe is now doing exactly that kind of thing.

To draw a market parallel, this Pelosi stand-off is similar to the zero-sum dynamic behind the central bank rates response to inflation, which was “They can’t raise rates!” vs. “They can’t not raise rates.” There was never a middle ground ‘draw’ to aim for – and which side won that zero-sum?

Yet even as the Fed dropped its forward guidance, while suggesting it could go forward in very large steps if needed, the market seized on suggestions that rate hikes could also slow, which “means” US rates will then start to fall sharply in 2023. Indeed, while July saw the Fed Funds rate rise 75bps to 2.50%, stocks were up 8-10%, bond yields distinctly lower, high yield spreads tighter by around 100bps, and the key US 30-year mortgage rate around 60bps lower.

And perhaps more strain on central banks, who don’t want to see any of this happening because it will mean they have to do even more on rates to reverse it. Unless they do want to see it happening, in which case we are in an even bigger mess than some think we are. But if they don’t, then market expectations of rate cuts in 2023 are likely to be as accurate as expectations of no rate hikes in 2022 were. And as expectations are that all will end well with this mystery over where Nancy is or isn’t.