A Market Bottom Will Need More Cuts To Estimates The rally in stocks since June’s low has been built on shaky foundations and, according to many market watchers, a key ingredient for a solid base is still missing — more cuts to earnings estimates.

An analysis of the past four recessions by Bank of America showed that the S&P 500 Index bottomed only after earnings per share forecasts had fallen either to or below the level they were at when the market last peaked. Fast forward to now — while projections have fallen, they are still about 6% higher than at the time of January’s all-time record.

“We’re still in the very early innings of the downturn and estimate cuts,” Bank of America strategist Savita Subramanian said. “Was June the big low? Our bull market signposts say no.”

Their words will send a shiver through those that have chased equities higher over the past six weeks even as company executives sounded more cautious about economic growth. US stocks finished July with their biggest monthly gain since 2020 as weaker economic data spurred expectations that the Federal Reserve could slow the pace of rate hikes. A better-than-feared corporate earnings season has also stoked wagers that profit margins are proving resilient to scorching inflation and gloomier consumer sentiment. 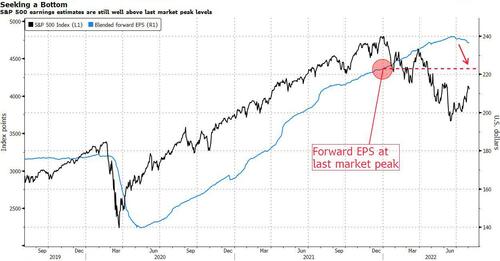 That’s not to say corporate guidance is holding up strongly or that analysts are sticking to bullish forecasts for the rest of the year. A Citigroup Inc. index showed earnings downgrades are outnumbering upgrades at a level last seen at the height of the pandemic in 2020.

Yet, according to Morgan Stanley strategists, the magnitude of the cuts is still “modest” and is likely to extend amid concerns around economic growth, limiting the rebound in stock markets. It would be “a big mistake” to assume that the market has already discounted a potential 15-20% decline in EPS estimates and “is looking through the trough,” strategist Michael Wilson said. He expects the bulk of forecast cuts to come through only in the fourth quarter.

Wilson said last month that the fair value of the S&P 500 would be at 3,400-3,500 in case of a soft landing and 3,000 in a recession — implying downside of as much as 27% from the last close. Lori Calvasina, head of US equity strategy at RBC Capital Markets, also said stocks remain at risk of a selloff from the possibility of further cuts to earnings estimates in the second half of the year. 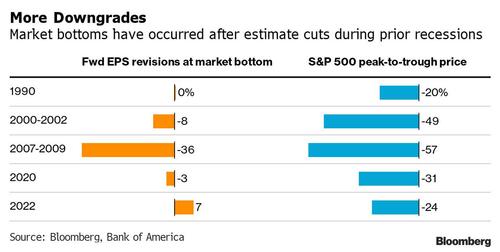 Others are less pessimistic. JPMorgan’s Marko Kolanovic, who is among the few remaining bullish voices on US stocks among top strategists, said investor expectations are likely to be reset with regards to company earnings as well as Fed policy, improving the outlook for equities in the second half.

“While we reduced growth and EPS forecasts, we expect equities to be meaningfully higher at the year end,” Kolanovic said.
For Gina Martin Adams, chief equity strategist at Bloomberg Intelligence, equities probably did hit a floor in June. But she still sees the rally as being limited until economic and earnings data begin to improve. BI analysts expect net income, excluding the energy sector, to rise “a mere” 2.3% in the third quarter and 5.5% in the fourth, she wrote in a note, adding that “the market’s road ahead is likely still fraught with peril.”

Bank of America’s data, meanwhile, underscore a big dispersion in how far estimates need to fall for stocks to find a bottom. As expected, that correlates highly with just how deep and prolonged any recession is likely to be. In 2020, when the recession was the shortest on record, estimates had fallen 3% when the market bottomed. During the global financial crisis, they sank 36% before stocks hit a floor.

“The stock market is vulnerable to more selloffs so long as earnings estimates are being downwardly revised,” said Kristina Hooper, chief global market strategist at Invesco. Still, the bigger driver of stocks is the Fed and a pivot in central bank policy would be the catalyst for a market bottom, she said.