Did Tiger Dump Its Tech Stocks: Fund Up Just 0.4% In July Despite Nasdaq Surge, Still Down 50% YTD The last time we discussed Tiger Global’s catastrophic performance was exactly two months ago when we found the formerly iconic hedge fund reeling in the post-tech crash wasteland of 2022, down a whopping 52% through June having lost money every single month in 2022… 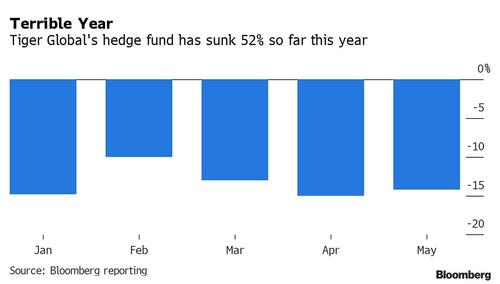 … putting it on track for what Bloomberg called a “Terrible year” and with good reason: 2022 has been its worst annual performance. It also means that the fund, which not too long ago had an AUM of $100 billion and was now a fraction of that, has to make more than 100% just to get back to its high water mark!

Paradoxically, that’s precisely what investors in Chase Coleman’s fund were expecting it to do, because as of June we found that there was no shortage of idiots out there and Tiger had seen five times more inflows than the amount of redemptions requests, according to Bloolmberg sources. Inflows have come from both firm employees and external clients, all of whom clearly hoping that having come down to the ground so blazingly fast, the fund would also recover its historical performance just as fast.

And why not: after all, all Coleman needed was for the Fed to pivot dovishly which would unleash a buying frenzy among the GAMMA/tech universe and lead to quick recoveries for the hedge fund.

Well, perhaps in theory, because in practice things ended up a little different, and according to a Bloomberg report Tiger Global’s hedge fund made just 0.4% in July, bringing its loss this year to 49.8%, despite the frenzied meltup in both the S&P which was up nearly 10% as well as the Nasdaq, which soared 12.3% in July.

Last month’s disastrous return follows a modest 3.4% rise in June, and can only be explained if one assumes the fund sold most its former tech losers, which would have been blowout winners in July… only they were no longer there.

A spokesperson for New York-based Tiger declined comment to Bloomberg, because after all what can they say: “yeah, we suck now.”

And speaking of Tiger’s 50 biggest equity longs, here they are again as of March 31: with the Q2 updated due mid-month, we wouldn’t be surprised to find many of the top tech names slashed to almost zero. 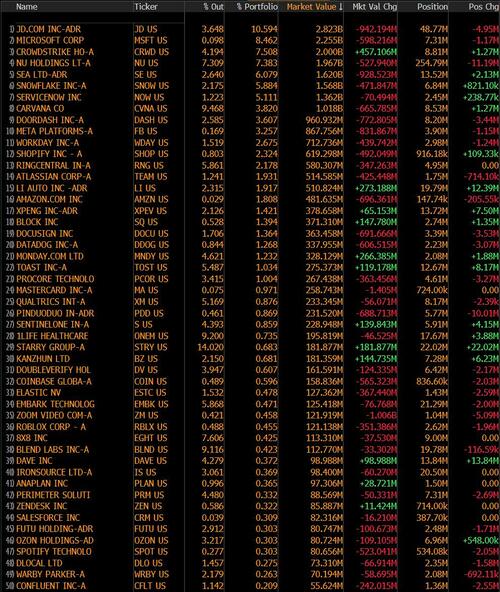