Back in April I wrote about the state of Shanghai’s latest round of lockdowns, asking whether or not something fucky was afoot (more than usual) across the pond in China. Since then, I had just assumed that things were returning back to normal and that the Winter’s lockdowns were an aberration.

But it isn’t looking that way. In fact, China’s latest actions only do more to raise my “fringe” suspicions.

As recent as this week, parts of Wuhan (and its 1 million residents) are being forced to lock down yet again because – wait for it – four cases of asymptomatic Covid were found amongst hundreds of thousands of screenings that the province provides daily.

China has been continuing its “Covid Zero” response strategy, which is makes so little sense and is so inefficient, vain, costly and fruitless that I can’t believe it’s not a product of Democrats here in the U.S.

The gist of the policy has been described as a “control and maximum suppression” strategy that uses “contact tracing, mass testing, border quarantine, lockdowns, and mitigation software” – also known as the George Orwell Special – to try and track and prevent cases.

While this might be doable for small islands or villages off the beaten path of a couple thousands people, the idea that it is going to be implemented to stop a virus no one can see, with success, for a country of 1.4 billion people, is ludicrous.

“The successful containment effort builds confidence in China, based on experience and knowledge gained, that future waves of COVID-19 can be stopped, if not prevented. Case identification and management, coupled with identification and quarantine of close contacts, is a strategy that works,” the Chinese CDC argued, advocating for their intense lockdowns, back in 2020.

According to the Center for Strategic & International Studies, the reason for China choosing to shut down the way they have is that “so much of China’s population is immunologically naïve that the losses might exceed a million deaths if China reopens before proper protective measures have been introduced.”

Color me not surprised that China has chosen the most intense possible way to lock down its residents and exercise control of them – but with omicron now making its way through the country, it seems like a futile effort. When does it end? Will China be subject to these “snap” lockdowns forever? I’m sure their government wouldn’t mind that…

Today’s blog post is free because I believe the content to be too important to keep behind a paywall. If you enjoy my work, would like to support it and have the means, you can be a free or paid subscriber here: Subscribe now

And while this reasoning for China’s lockdowns may prove correct, I can’t help but look at the other side of the coin, as I did back in April. We know that the virus is going to eventually become endemic and we know that China’s lockdowns are extremely costly for the global economy.

We also know that China is currently in a position where putting pressure on the global economy may not be the worst idea in the world for them – after all, they are trying to institute their own reserve currency with other BRIC nations, and one way to force pain onto the West is to disrupt the supply of everyday goods.

Namely, I was worried that China’s absolutely insane reaction to this virus was for one of two possible “fringe” reasons:

While the question of on-purpose lockdowns for supply chain reasons sounds like a conspiracy theory by itself, when taken in context with the facts that:

…it all of a sudden doesn’t seem like it would be out of the canon of their potential plans to usurp the U.S. as a global super power.

And lockdowns do have a profound effect on the rest of the world’s ability to get products. Here’s the effect on shipping from the beginning of this year: 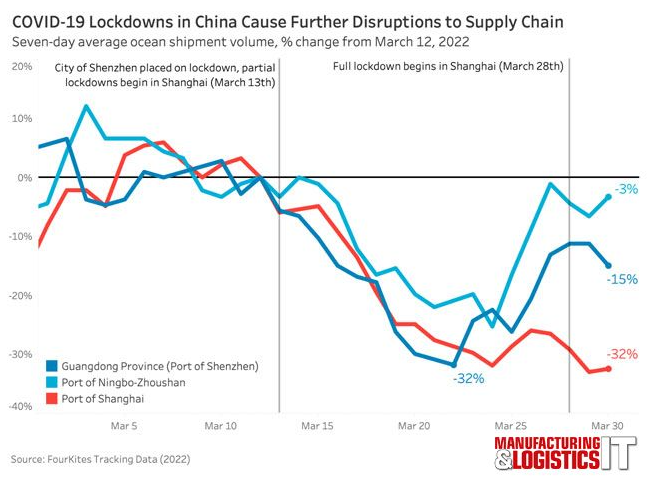 This, in turn, lead to additional backlogs at ports and higher shipping costs, as Bloomberg points out: 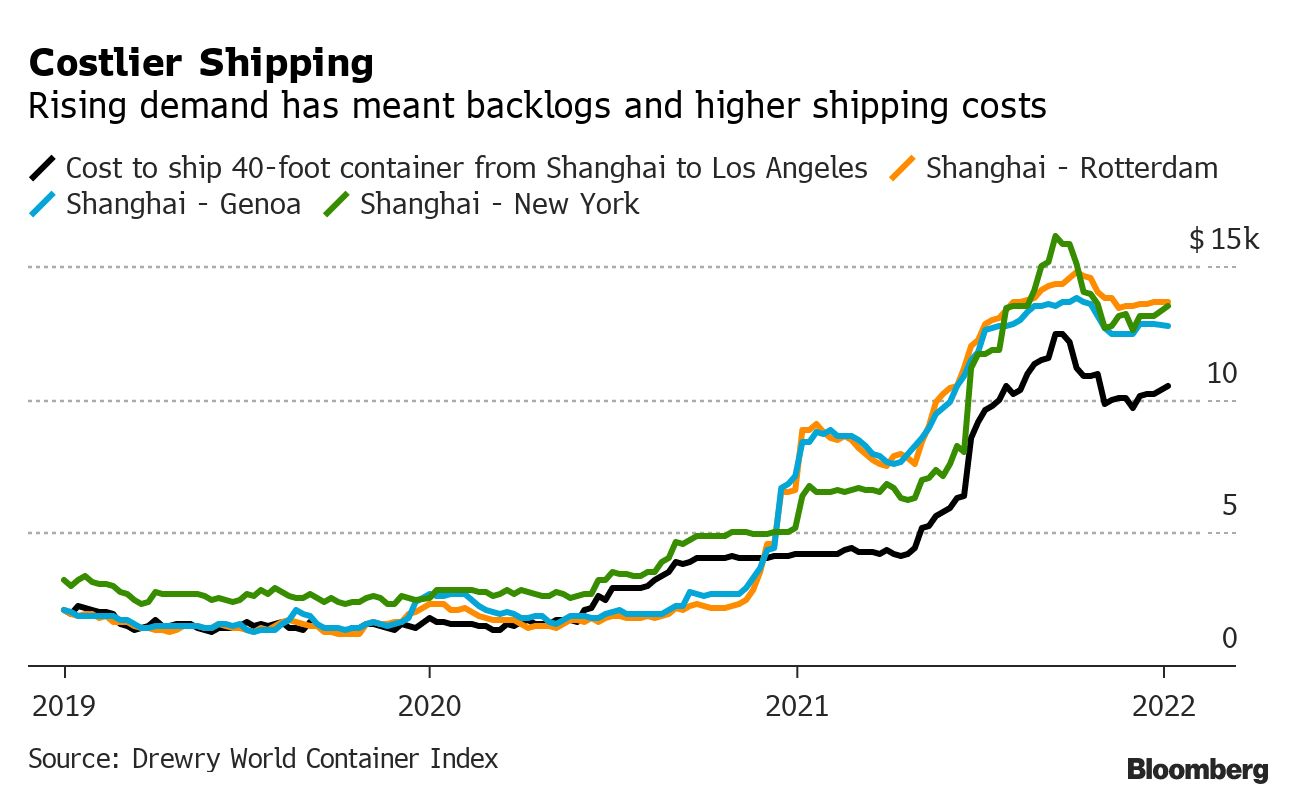 And the extremely interesting kicker is that lead times are only crushed for the U.S., as we desperately wait for China’s imports to go about our daily lives. In China, you can see that the impact on manufacturing delivery times has hardly budged after the initial set of Covid lockdowns:

In layman’s terms, this means that if they wanted to, and if they were locking down for reasons other than Covid, China could, in theory, still provide its own people with what it needs domestically, while making other countries around the world suffer. 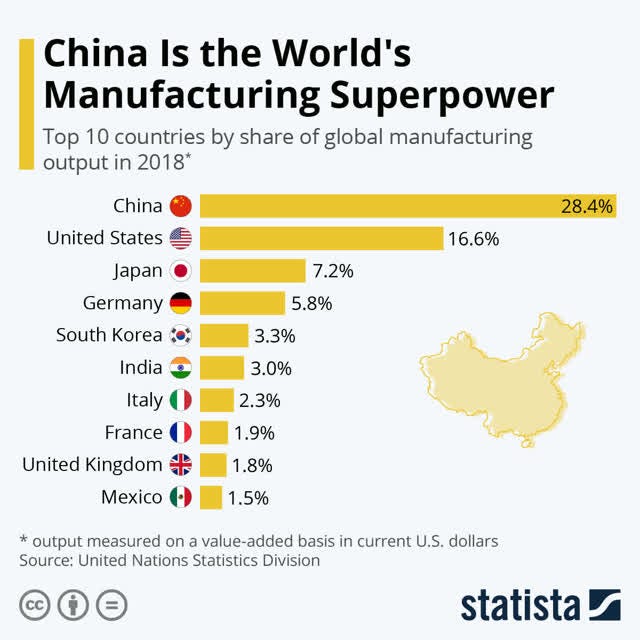 I can’t help but continue to keep this angle in mind as headlines about new lockdowns in China make their way across my desk.

And while my contentions may be proven to be conspiracy theory (hey, we exist on the Fringe for a reason), you can’t say that they aren’t at least worth considering and watching closely.

There is no doubt to me that we are entering into a new era with China and Russia – one that feels like it could be the beginning of a new Cold War, wherein the West and BRIC nations diverge further from each other to create a new, bifurcated global economy and hierarchy.

In fact, I wrote months ago that the U.S. should take note of this, acknowledge it, make slight concessions and try to take action to create world peace.

If you were China, why wouldn’t you take this time to try and expand your empire? The U.S. is mired in recession, the President has one of the lowest approval ratings in history, economically the Central Bank has been put into a crunch, division amidst the country is at highs and economic “sanctions” we just tried to put on Russia did little, if anything, to damage the ruble.

It’s prime time for China to take the boldest of actions, in my opinion – which is why I don’t have any issue carefully scrutinizing their lockdowns through my conspiratorial lens.

I’d love to hear your thoughts in the comments.