From the mid-June lows, stocks have soared on the back of various narratives from ‘peak inflation’ to ‘Fed pivot imminent’ – flip-flopping to ‘bad news is great news’ and sending the Nasdaq up 20% as bond yields plunge under the threat of recession (whether you say the word or not).

Shorts have been squeezed; over-hedging has been unwound; and volatility RV strategies and CTAs have done the rest – but under all the marginal movers, what is really going on?

We know who has been buying this dip… RETAIL

As we detailed previously, retail investor flows have been the major driver of the rebound in equities in the last few days across the broader market, as aggregate buying has been consistently above the YTD average (avg. $1.36BN over the last five days), while the focus has been on classic tech stocks such as TSLA, NVDA, AAPL, AMD, and AMZN. 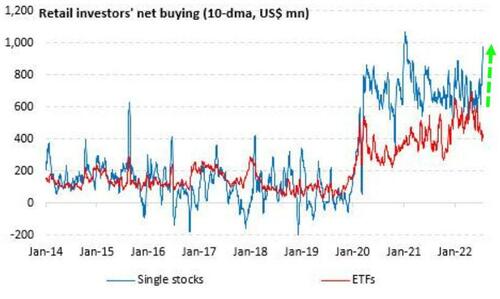 Additionally, Goldman Sachs pointed out that they are seeing outsize call-option buying once again – with exuberance levels sporadically reaching those seen during the retail option craze in 2021 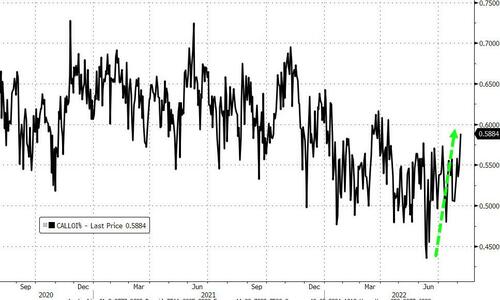 Susquehanna confirmed “signs that retail is chasing this rally as well.  Apparently in the first hour of the day call volume outpaced put volume by levels we had not seen since the retail craze during the day.”

And now we know who has been selling… INSIDERS

Bloomberg reports that, as the 500-member index posted its best month since the 2020 election, corporate insiders continued to sell their shares at a faster pace than they bought them. Selling outpaced buying by a multiple of 2.3, the most since the market selloff began in January, data compiled by the Washington Service show. 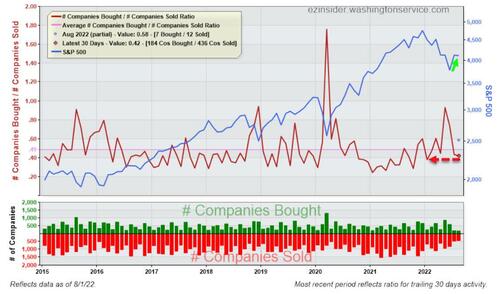 Insider transactions have a track record of providing an early read on market direction over the years.

“Net net, it does bother me that during this rally from the lows you didn’t have insiders stepping in and buying their shares,” Jim Paulsen, chief investment strategist at Leuthold Group, said by phone.

“It’s not a deal-breaker, but it’s a certain vote of confidence. It’s one of those things you pay attention to.”

So, once again, are retail traders going to end up being the bagholders? Given The Fed’s recent jawboning walkback of the market’s perceptions of dovishness…

“There’s a lot of stuff that’s troubling out there, so insiders could be saying, after a decent run in July, let’s take some chips off the table,” said Kim Forrest, chief investment officer at Bokeh Capital Partners.

We suspect there could be considerable pain for the dip-buyers (and if everything’s so awesome, why are insiders dumping stock and announcing mass layoffs?)