For a while, it was a popular narrative: Chinese stocks would outperform those in the US and other advanced economies. The thesis was simple. China needs to ease financial conditions, via a stronger equity market and weaker currency, to engineer an economic recovery, whereas the US and Europe are doing the opposite to cool inflation at the risk of a recession.

It was a great trade in June following Shanghai’s reopening from lockdown, but since then it has given up all the profit. That shows that China’s efforts to reflate the economy are facing considerable constraints.

US House Speaker Nancy Pelosi’s visit to Taiwan has left few scars in financial markets so far. Japan reported Thursday that China likely fired missiles over Taiwan during military drills for the first time, but markets have largely stayed quiet. Without dramatic escalation in coming days, geopolitical risks may give way to central bank policies and economic data as the major driver for markets.

Back in June, Citigroup strategists led by Jamie Fahy recommended clients buy Hang Seng stock-index futures and sell the S&P 500 based on the idea that the policy goals of China and the US are at polar opposites.

Starting in July, however, Chinese and Hong Kong stocks steadily lost momentum, while equities in the US and Europe recovered. (The strategists took off the short-US-stocks leg in mid-July, booking an 8.7% gain, and replaced it with a short position in European stocks.) By Thursday, that trade (long HSI versus Euro Stoxx 50) was stopped out with a loss of 6%.

“This was predominantly the result of the growing narrative surrounding central banks pivoting, China stimulus underwhelming, and Chinese headline geopolitical risks,” wrote the strategists. “Whilst we are not convinced that the thematic rationale for the trade has disappeared, we do choose to stop out now given that the trade just simply isn’t working.”

They are not alone in staying bullish on Chinese stocks. Goldman Sachs predicts the MSCI China Index will return 24% over the next 12 months. Last month, Clocktower Group found many onshore investors were convinced local assets would outperform because the Chinese economy is recovering while the rest of the world is edging toward a recession. 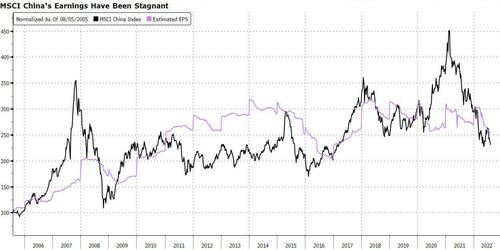 The optimism toward China is built on three assumptions: a recalibration of the Covid Zero policy, more stimulus, and a belief that the worst is over for the property market.

Arguably, none of these assumptions are proving to be true. Periodical Covid outbreaks hinder the recovery. Beijing has effectively given up on this year’s growth target, meaning large stimulus isn’t likely. And mortgage boycotts among homeowners opened a new front in the housing crisis.

One could argue that the recent rally in US stocks was built on a shaky foundation, especially now that the Fed has pushed back against the idea of a policy pivot. But for now, the narrative of China beating the US is simply not working.