Graphical Representations of the Fed’s Effort to Stimulate Bank Lending

Bernanke is trying every way he can to get banks to lend (printing coupled with a multitude of lending facilities and Fed programs).

It’s easy enough to prove the printing: Base money supply is up about $1.8 trillion since the start of the recession.

The charts below offer a stunning narrative of the Fed’s efforts and the results to date. 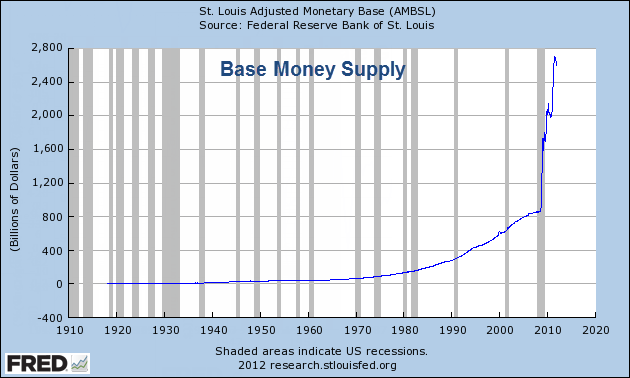 The Money Multiplier Theory (an incorrect theory) suggests this money would be lent out 10 times over causing rampant price-inflation and GDP growth.

With some charts below created by my friend “BC” let’s take a look at Bernanke’s efforts to stimulate lending. 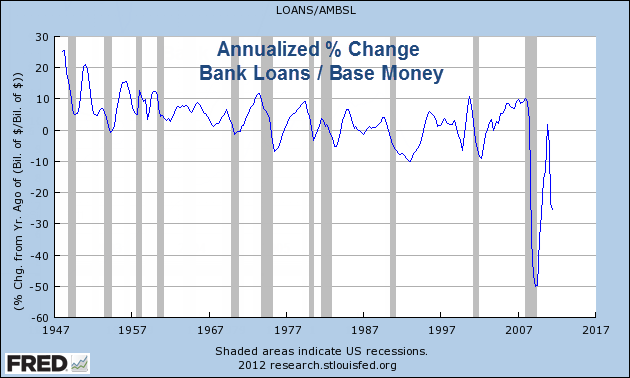 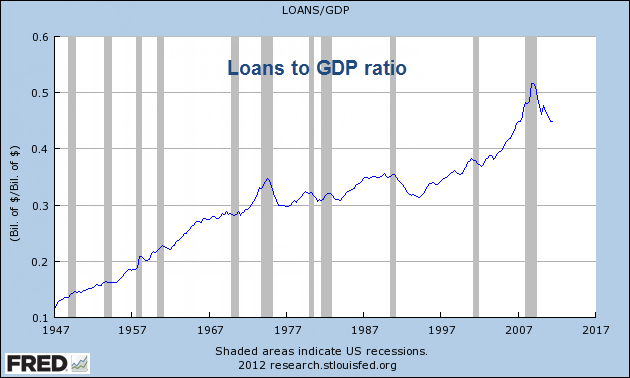 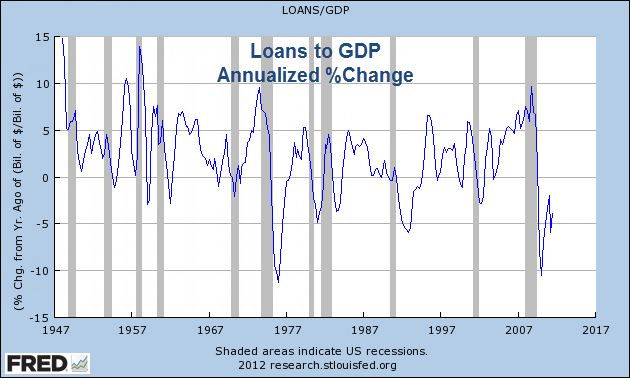 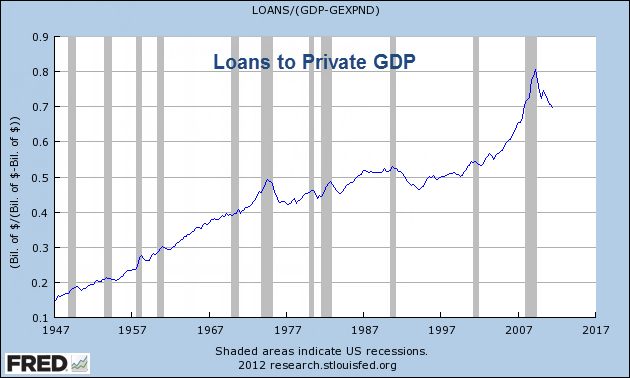 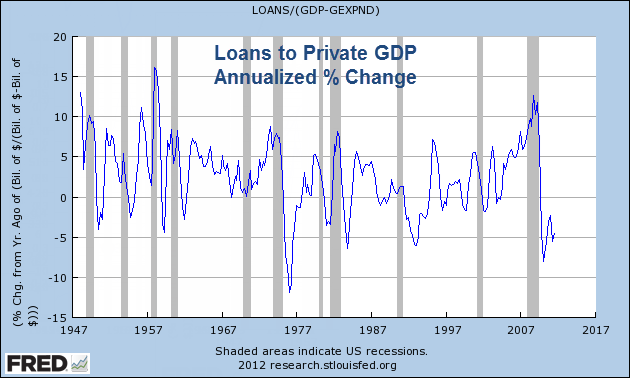 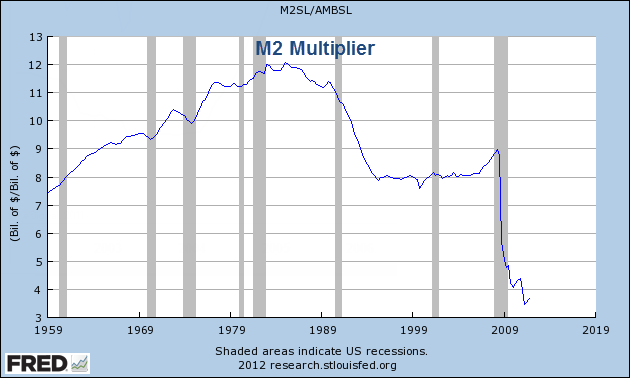 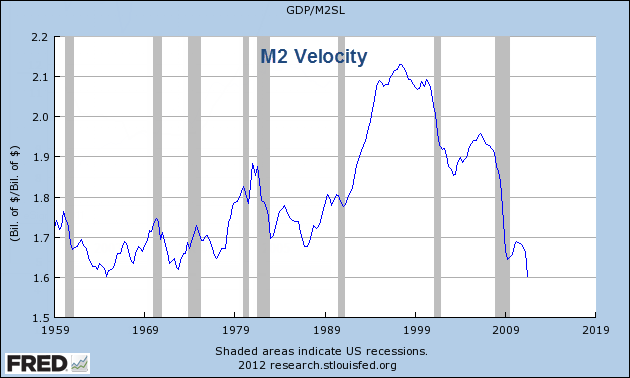 The above charts show that it is taking more and more money just to keep the economy afloat. 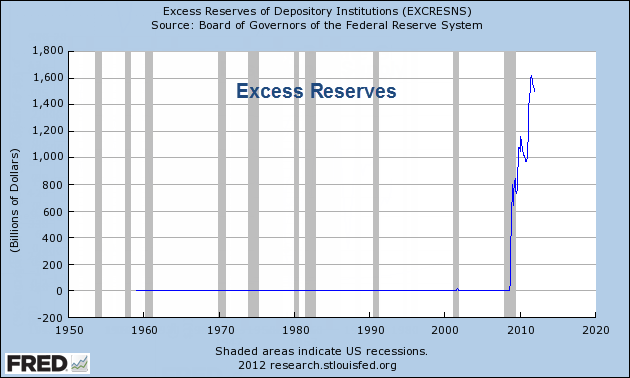 Of the $1.8 trillion Bernanke has added to base money supply since the start of the recession, nearly all of it is sitting parked at the Fed as excess reserves. 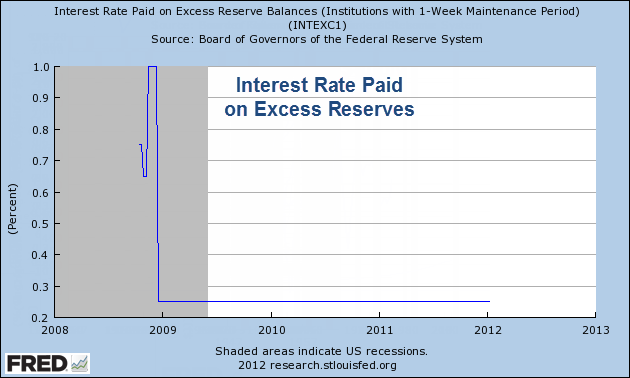 In short, banks would rather have $4 billion in free money at a measly .25 percent than make much more money by lending it out. This indicates two things:

If and when banks do start lending, it will not be because all those excess reserves have tempted them. Rather it will be because banks feel they have credit-worthy borrowers.

In the meantime, debt deflation rolls on, distorted of course by global central bank stimulus everywhere one looks, notably (the Fed, ECB, China, Bank of England) and coming up shortly, the Bank of Japan.

As I have stated before, competitive global currency debasement is a good environment for gold.

Let’s wrap this up with one final chart. 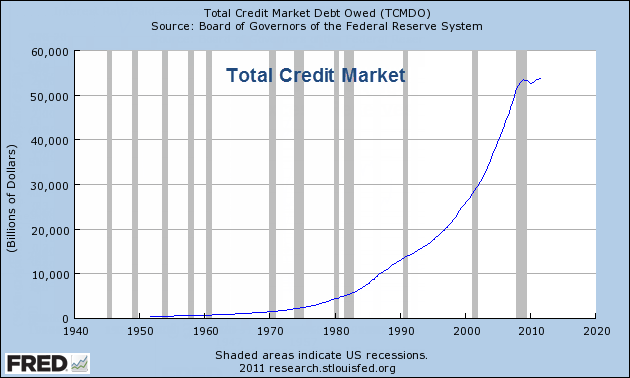 As you can see the total credit market is well over $50 trillion. Yet a large number of misguided souls believe printing $1.8 trillion of which $1.6 trillion is parked as excess reserves will cause hyperinflation.

It won’t. Hyperinflation is a political event, not a monetary one. Besides, the US has more gold than any other nation. For further discussion, please see Hyperinflation Nonsense in Multiple Places.

Yes, the US is going to have a “debt moment”, just as Europe is having one now and Japan will have soon enough. However, that moment may be quiet a long ways away (or not), but hyperinflation will not be the result when it happens.