Anatomy of a Rally

Anatomy of a Rally

Today’s rally thrust a spike in the heart of the head and shoulders analysis that was so embraced about this time last week by the New World Order. In the spirit of, "if you can’t beat them, join them," let’s take a look at the most bullish frame of reference I can construct, albeit only for a trade while awaiting the re-emergence of an ongoing bear market. [Click on charts for larger views.]

In Advanced GET parlance, the above SPX chart has triggered a "Type 1 Buy Signal." To make a long story short, (no pun intended) all a Type 1 Buy Signal means is that a corrective wave has ended and a new impulse wave has begun. For our purposes, the corrective wave above is contained by the auto-regression channels and in today’s rally the SPX broke above those channels on the chart. The significance for me is that now I have a target for where this rally should end, using orthodox Elliott logic as applied by Advanced GET. 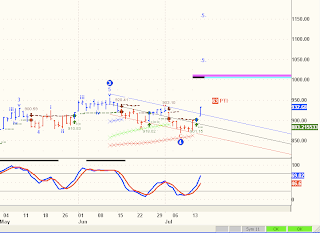 The chart above is a close-up of the corrective wave along with three likely targets for the resolution of this rally. These levels are first, the blue horizontal line coming in just above 1000 on the SPX, then the two Wave 5 chart annotations at the 1050 and 1150 levels. Note how the False Bar Stochastic confirms this wave count and rally.

This spunky rally from the first week of March has been a bear (no pun again) to manage through strictly pattern recognition analysis. The mantra here has been that we trade the trend, not the forecast and as you can see on this Daily chart of the SPX, the Daily Trend Model flipped LONG yesterday at 901.15 and caught all of today’s rally. As of today, the reversal level to go Short is at 883.21, as indicated on the right axis of the chart.

My big picture view of the market remains unchanged. Below is a monthly chart that although not tradable, provides focus and perspective:

Here is a close up of the same chart with Fibonacci retracement levels: 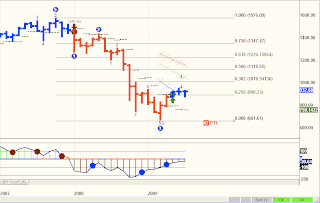 Note how prices in this rally since March have only retraced 25% of the entire bear market decline and that how the next important Fibonacci resistance level is at 1011 on the SPX. Now look again at the Daily chart with the resistance levels and note how the first level (horizontal blue line) comes in right at 1010-1015.

Finally, a tip of the hat to Robert Prechter’s group, who have been correctly assessing this market for the past 12 months, including the corrective wave up currently in play. They expect that when this rally plays out (could be any time) that will mark the end of Primary Wave 2 UP, to be followed frightening market panic in Wave 3 DOWN.

For those interested, Elliott Wave International is offering a free week of their Commodity analysis service, which you can access by clicking the banner ad at the bottom of this page.