Get over the idea that only children should spend their time in study.  Be a student so long as you still have something to learn, and this will mean all your life. ~ Henry L. Doherty

Welcome to Phil’s Stock World “Technical Trading 101” Handbook version 2.0!  I think it’s a good time to update the handbook with newer charts and graphs, and give it more of a Biotech/Pharma fling. I also thought that ‘live’ charts could be used to place virtual trades.  This would allow all to have a visual of trading patterns, as well as see how the charts are set up. This handbook is comprised of some simple methodologies in the art of Technical Analysis (henceforth referred to as TA).  This handbook is not intended for novice traders, but it is my hope that by using examples that are ongoing in the market, all can become better traders AND investors.

TA is the art of reading charts and deriving a decision to buy or sell solely on the chart (something that Optrader does on his tab).  Financial statements do not need to be read, as the chart speaks for itself. Technicians believe that past price patterns, trading actions, and price-volume relationships, among other indicators, form an accurate basis of where the stock is likely to move to in the near-term.  Since price patterns on a chart are formed by investors & traders past emotional responses to price movements, the patterns can be exploited for use in the future.

TA is not a crystal ball!  Patterns can, and will fail, and will result in losses.  However, if the trader focuses on highly reliable patterns (e.g., shooting star), combine several indicators (e.g., MACD), and works on entry and exit points, a technician will be way ahead of the game.

This handbook begins as a macro view of the market and its cycles.  The market cycles similar to the seasons of the year, move in and out of favor for various reasons.  Dow’s Theory of the market discusses stock price movements that include, what is now called TA as well as some portion of sector rotation.  By understanding fundamental analysis and using TA, a technician can use the information to make a strategic decision about trading a particular stock.  When trading, the technician needs to decide what type of trade they are going to perform (e.g., scalp or momentum trade) and how to use TA.  Charts and other indicators used within charts comprise the next few chapters.  From there forward, candlestick patterns to aid in decisions about whether to trade a stock.

Experts and the main stream media say that market timing is impossible.  In many cases that is true, but when TA is used, timing market movement is very profitable on a consistent basis.  As a technical trader, the purpose is to find the best trades and to time the entry and exit points.  Typically, when entering stock or option position, the amount should not be more than 10% of a portfolio, and at PSW, the mantra is to buy a 1/4 or 1/3 entry for the first leg in.  After all, any trader can find the best trade in the world, but if it is not timed well, it may turn into a loss.  Every stock or asset class goes through a classic market cycle.  Figure 1 is a diagram of the four stages of the market cycle. 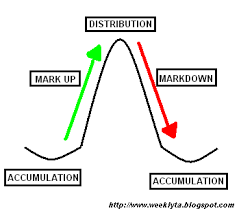 One such example of a market cycle was Curis (CRIS).  Originally, CRIS was recommended in late 2009, and ½ of the position was sold in May 2010 for a nice ~50% gain.   The company’s flagship drug, GDC-0449, had a setback in the summer of 2010.  The science said it may work, but with late-stage colon cancer it was a huge hurdle to overcome.  What was not considered and nice for PSW members is that the accumulation was back in favor in late summer, as there were 19 other clinical trials ongoing for GDC-0449.  Therefore, the ups and downs of the stock price moved in cycles.  By observing those cycles, it was much easier to comprehend the next moves.  Figure 2 shows Curis stock that has completed of the four stages and now appears to be on the move back up.  The question remains, when to get out?  Many traders at PSW sold at least 1/2 of our stock, knowing that if the stock moved back down, a trade could be made again. For a long-term investor or trader, understanding market cycles can greatly benefit their portfolio.  The accumulation phases are the type of opportunities that allow for buying into the smaller dips, averaging down the stock until the amount in a portfolio is reached (typically not more than 3-5% for any one higher risk stock, or 10% for a S.I.R.P. – safety and income at a reasonable price stock) (D. Rosenberg’s phrase).

Stages of a Market Cycle

The Pharmaceutical sector is a good example of how it is possible to profit from their recent market cycle.  As shown in Figure 3 where all the companies in the industry were rising and falling in the same time frame.

Figure 3.  Market cycles for the Pharmaceutical giants Merck, Pfizer and Glaxosmithkline versus the S&P. In addition to the actual price cycle, there is also a sentiment cycle which accompanies each stock, sector, or overall market. By definition, the market balances buyers and sellers, so that there is a balance between positive and negative sentiment.  Thus it is impossible for a high proportion of market participants to have negative sentiment.  However it is possible to argue that when a high proportion of financial commentators and advisors express a bearish (negative) sentiment, some people consider this as a strong signal that a market bottom may be near.  The predictive capability of such a signal (e.g., market sentiment) is thought to be highest when investor sentiment reaches extreme values.  Indicators that measure investor sentiment may included:

At PSW, there are traders and investors alike, and using the wide range of talents and emotions, the group gauges the emotions, and attempts to use all the data to decipher where we are in the sentiment cycle.  We also use  Bob Ferrell’s “10 Market Rules to Remember” noted several years ago.  The words of wisdom are timeless and are especially appropriate as investors grapple with the difficult juncture at which stock markets find themselves at this stage.

A trader is their own worst enemy because emotions give room for destructive impulse trading.  By understanding each cycle and what emotions follow, traders can be better prepared.  Market cycles are normal, necessary to balance the financial markets and restore equilibrium to forces of supply and demand.  Understanding these market cycles and being able to recognize where we are in the cycle can help us to be better investors.  Join us at PSW in member chat where a group of traders and investors pass ideas and Philosophies for future gains.