Warren Buffett: “Wall Street Is Turning The Market Into A Gambling Parlor” 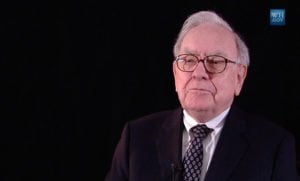 Warren Buffett has derided Wall Street for consenting speculation in the stock market, to the point of turning it into a “gambling parlor.” The CEO of Berkshire Hathaway Inc (NYSE:BRK.A) took aim at American firms that “became poker chips” as they “make a lot more money when people are gambling than when they are investing.”

During his annual shareholder meeting on Saturday, legendary investor Warren Buffett charged against Wall Street by saying it “ makes money, one way or another, catching the crumbs that fall off the table of capitalism.”

As reported by CNBC, Buffett grounded his criticism on the soaring use of call options as brokers make greater sums when they bet on the market than from normal investing.

The resulting market dislocation does sometimes play in Berkshire Hathaway’s favor, Buffett claimed, as his firm splashed a whopping $41 billion on stocks during Q1 —money it had kept on the shelf after a long quiet period.

Part of that money —around 7%– was used to increase Buffett’s stake in Occidental Petroleum Corporation (NYSE:OXY) to 14%.

In relation to these types of moves, Buffett said, “That’s why markets do crazy things, and occasionally Berkshire gets a chance to do something.”

The annual shareholder meeting was also attended by Buffett’s partner Charlie Munger, who said, “We have people who know nothing about stocks being advised by stockbrokers who know even less.”

“It’s an incredible, crazy situation. I don’t think any wise country would want this outcome. Why would you want your country’s stock to trade on a casino?” he added.

Buffett has aimed at investment bankers in the past, asserting that they incite mergers to capitalize on fees, with little to no care about improving the companies. He is known for referring to investment bankers as “money shufflers.”

At the same venue, he said his Berkshire would always have enough cash, and that it would always be a better option than banks in times of crisis when it comes to offering companies credit lines.