The Frozen Russian Superyachts (And Those That Got Away)

Reports about the superyachts of sanctioned Russian billionaires being frozen or detained came a dime a dozen in the aftermath of the invasion of Ukraine by the country at the end of February. After the dust had seemingly settled, another big fish – the $510 Scheherazade – was nabbed by Italian authorities on Friday. The ship named after the fictional narrator of the One Thousand and One Night tales is linked to Russian President Vladimir Putin, who appears on several international sanction lists.

The Scheherazade is now among the floating displays of obscene wealth closely watched over in European harbors and marinas but, as Statista's Katharina Buchholz asks (and answers below), how many of the most valuable superyachts owned by Russian billionaires are still dodging sanctions in more friendly water? 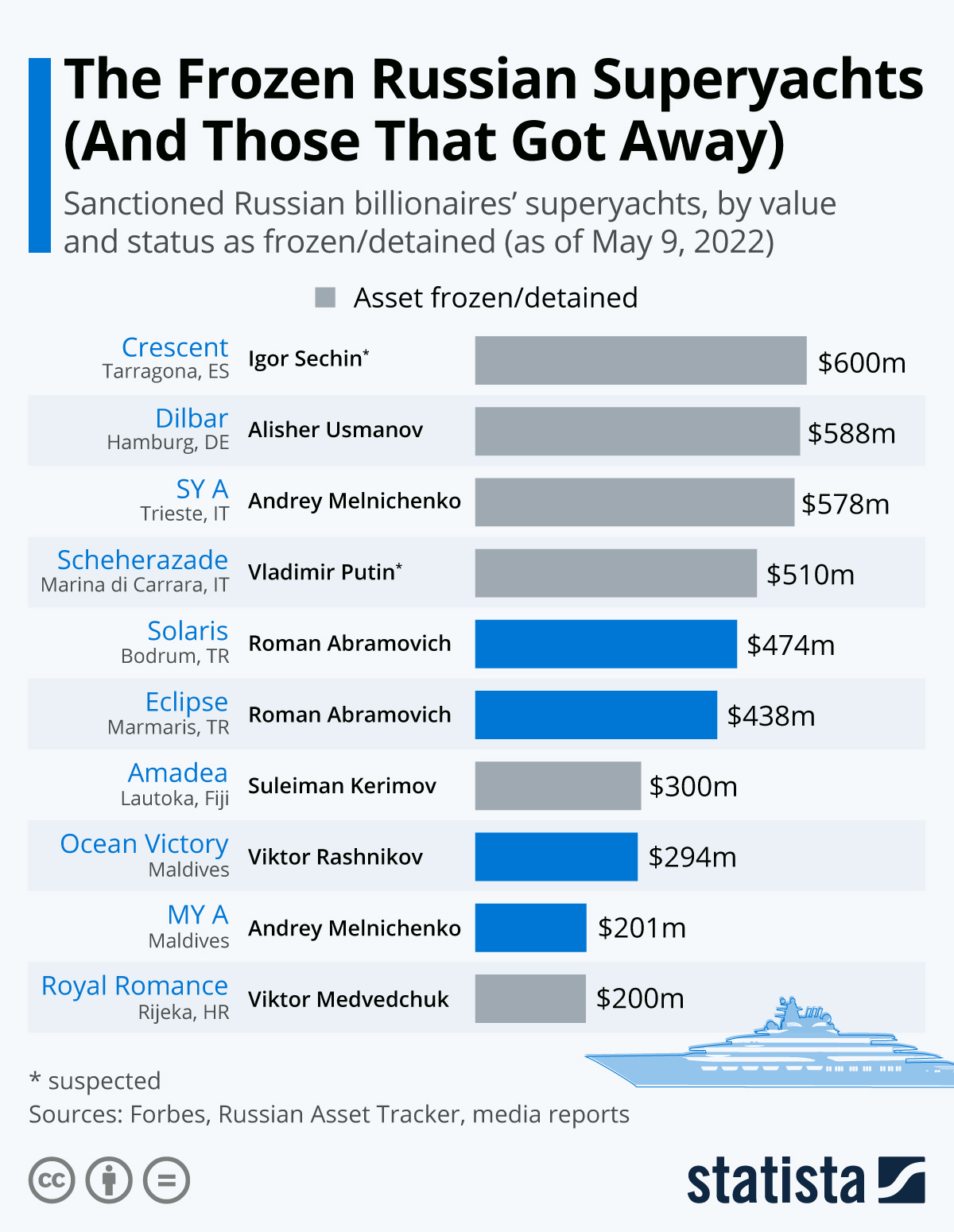 Among the megalomaniac yachts detained in Europe are actually some of the biggest known to be owned by now sanctioned Russians, for example the Crescent of Rosneft CEO Igor Sechin, the Dilbar of Metalloinvest’s Alisher Usmanov and the world’s largest sailing yacht, three-master SY A, owned by Andrey Melnichenko of EuroChem and coal company SUEK. This is according to information by the Russian Asset Tracker and several media reports by Forbes and others.

Yet, former Chelsea FC owner Roman Abramovich managed to get this yachts out of the reach of sanctioning countries' authorities to Turkey. Other boats, among them another Melnichenko vessel, were spotted in the Maldives. Suleiman Kerimov, a major stakeholder of Gazprom, Uralkali and Sberbank, was less lucky as his $300 Amadea has reportedly been held in Fiji since mid-April and was finally officially seized on Thursday under the auspices of the U.S. government before the matter started to occupy Fijian courts over the weekend. The yacht was reportedly headed for Vladivostok from Mexico on an usual crossing of the Pacific Ocean.

The most valuable of the seized or detained bunch of Russian superyachts is the Crescent, currently being held in Tarragona on the Spanish Mediterranean coast.

At an approximate value of $600 million and a length of 443 feet, it is one of the largest yachts in the world and is said to feature a large glass-bottom pool, a helicopter hangar and a two-story glass atrium.

Another enormous vessel – detained by authorities while undergoing repairs in Hamburg, Germany – is the Dilbar. It is the world’s largest yacht measured by interior volume and has a staggering length of 511 feet. The yacht is believed to have been even more expensive upon delivery in 2016 than the Crescent, which was finished in 2019. Putin's rumored yacht, the Scheherazade, was delivered in 2020 and was valued at $700 million then.