Inflation Did Not Peak In March 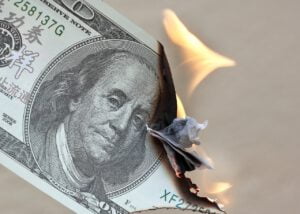 In his podcast addressing the markets today, while commenting on inflation , Louis Navellier offered the following commentary.

If you wish to listen to this commentary, please click here.

The big news this week was that the Labor Department announced on Friday that the Consumer Price Index (CPI) rose 1% in May and accelerated to an 8.6% annual pace in May, which is the highest level of inflation in over 40 years (since December 1981).  The core CPI, excluding food and energy, rose 0.6% in May and is now running at a 6% annual pace.  If you are looking for a silver lining, the core CPI decelerated slightly from the 6.2% annual pace in April.

Also notable is that fuel oil soared 16.9% in May and 106.7% in the past 12 months. All the shipping costs are high and that just ripples through the economy. The 10-year Treasury yield is over 3% and crude oil prices are over 121 right now. And I think we are going to have this, unfortunately, through September, because that is peak summer driving demand.

The bottom line is that inflation did not peak in March, as I had earlier hoped.

I am still shocked that the European Central Bank (ECB) on Thursday left its key interest rate unchanged at -0.5%, considering that market rates have been rising and inflation in the eurozone is higher than the U.S. The ECB did say that it will stop its quantitative easing in early July and will be raising its key interest rate by 0.25% a few weeks later in early August. Frankly, the ECB is so far behind the inflation curve and market rates, that they have guaranteed a weak euro, which ironically is inflationary.

Our Fed is doing better but they are still behind. I am seeing three 0.5% increases on June 15th, July 27th, and September 21st. Then I expect the Fed to pause because they are not going to raise key interest rates within a week of a mid-term election.

In the current inflationary environment, companies profiting from inflation, like energy, fertilizer, food and shipping stocks, remain an oasis for investors.

Additionally, if we look back since the market peak on November 19, the only stocks that are up are the top 10% in the S&P with the highest dividend yields. So, dividend stocks also remain an oasis.

Finally, this pushback against energy is just a national disaster. Every ESG investor that purged fossil fuels and those that just did not invest in energy are going to have a horrific performance this year, relative to benchmarks. Everybody is looking for any excuse to embrace energy stocks and put them back in the ESG indices, and S&P started that when they kick Tesla out and put in Exxon Mobil. There is going to be a lot of institutional money going into energy stocks because it is an oasis.

Tesla Inc (NASDAQ:TSLA) famously invested $1.5 billion in Bitcoin in February 2021, but that is nowhere near that of MicroStrategy’s Bitcoin ownership. The U.S. business intelligence firm most recently reported 129,218 of the cryptocurrency on its balance sheet – far ahead of Tesla’s 43,200. Source: Statista. See the full story here.