Treasuries Trapped In 3% World Show Oodles Of Confidence In Fed 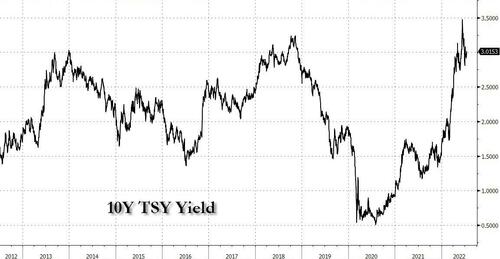 Appearances can be deceptive. Especially those that seem self-evident at first sight.

On the face of it, it would seem that Treasuries around current levels offer investors a good deal. After all, for the better part of the past decade, such seemingly high yields have been elusive. However, at current levels, long-dated maturities show circumspection, but also reflect optimism about the Fed at the same time.

From the looks of it, the chances of inflation averaging less than 3% over the next 12 months look pretty slim. If you are thinking otherwise, you need to be about as optimistic as finding a bucket of fresh potable water right in the midst of the Atlantic Ocean (the one-year breakeven rate, for the record, is around 3.80% as I write this). Suffice to say that breakeven rates across the curve, right up to the 10-year, are all well above 2%.

While inflation may not evolve in line with the market’s view, it is still be abundantly clear that investors buying long-dated Treasuries are putting a lot of faith in the Fed’s ability to put the inflation genie right back into the bottle, where it was ensconced for years and years before the pandemic disrupted that hibernation. Even assuming the Fed will be able to bring inflation under control eventually, it would be foolhardy to assume that consumer-price increases will end up at 2%, kowtowing obediently to an arbitrary rate plucked out of thin air.

However, the current predicament of yields treading water is also a reflection of concerns about how the economy will fare amid all the tightening. Even if we were to see a blip on the growth charts, it’s hard to take a dire view of the economy over a sustained period given how tight the labor market is and how resilient demand has been.

So the current long-dated yields have a lot of Fed optimism and economic pessimism baked into them. Partaking of them may need a warning on the label.