Is The Fed At The End Of Its Rope? 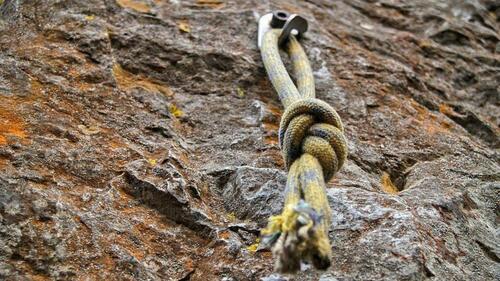 Authored by Michael Maharrey via SchiffGold.com,

The Federal Reserve delivered another 75 basis point interest rate hike at its July FOMC meeting. This pushes the federal funds rate over the 2% threshold to between 2.25% and 2.5%.

The mainstream media emphasized the size of the hike. One headline called it “a second super-sized hike,” with many other mainstream pundits noting that it matched a June hike was the biggest since 1994. But it wasn’t as big as the full 1% hike everybody thought was on the table after we got June’s flaming hot Consumer Price Index (CPI) data.

Here’s the question: has the Fed reached the end of its rope? Will this be the last hike in this cycle?

The corporate financial press seems to think the Fed will hike again in September, and the central bank certainly left that impression. The FOMC statement said it “anticipates that ongoing increases in the target range will be appropriate.” Powell said another “unusually large increase” could be appropriate at the September meeting.

But the FOMC state left some wiggle room, saying, “The Committee would be prepared to adjust the stance of monetary policy as appropriate if risks emerge that could impede the attainment of the Committee’s goals.”

In other words, the Fed can stop hiking at any time.

Federal Reserve Chairman Jerome Powell left even more space to retreat from the inflation fights, saying there is “significantly” more uncertainty right now than normal and the lack of any clear insight into the future trajectory of the economy means the Fed can only provide reliable policy guidance on a “meeting by meeting” basis.

The markets seemed to interpret the Fed’s stance as more doveish. Stocks were up, as was gold.

The Fed may well need that wiggle room.

With this 75 basis-point hike, interest rates are now equal to the peak of the last hiking cycle in December 2018.

Passant Gardant published a graph that indicates the current interest rate is above the maximum that the economy can handle before plunging into a recession.

As you can see, the peak of the rate hike cycle gets lower and lower with each subsequent tightening. No matter how emphatically Powell insists that the Fed can raise interest rates, slay inflation and bring us to a soft landing, reality says otherwise. There is nothing to lead us to believe that the Fed can get rates to 2% without crashing the bubble economy, much less hike them to 3.5% or 4%. (And that’s not even enough to slay inflation.)

When interest rates reached this level in 2018, the stock market crashed and economic data went wobbly. In response, the Fed reversed course and put tightening on pause. In 2019, it cut rates three times and relaunched quantitative easing (although it refused to call it that.) This all happened long before the extraordinarily loose monetary policy launched in the wake of the coronavirus pandemic.

Today, there is even more debt and malinvestment in the economy than there was in 2019. It seems unlikely the Fed can push rates any higher without a complete economic meltdown. And we may already be past that point of no return. Despite claims to the contrary, it appears the US economy is already in a recession and has been all year.

The FOMC conceded that the economy appears to “have softened.” But the committee remains sanguine.

“Nonetheless, job gains have been robust in recent months, and the unemployment rate has remained low,” the FOMC statement said.

During his post-meeting press conference, Powell insisted the economy was not in a recession.

“There are too many areas of the economy that are performing too well. I would point to the very strong labor market. [It is] true that growth is slowing.”

As Peter Schiff noted, the Fed chair apparently picked up its copy of White House talking points declaring that two consecutive quarters of negative GDP growth doesn’t mean the economy is in a recession.

“If you think the Fed is independent, today’s press conference should put that myth to rest. Powell clearly got the Biden administration memo that recession is not defined by two consecutive quarters of falling GDP. Powell even said it’s not his job to declare a recession,” Schiff said.

Powell has to downplay the GDP. In the first quarter of 2022, GDP came in at -1.6 percent. The Atlanta Fed projects another -1.2% decline in Q2. Using the common definition, that would mean we’re in a recession now, and we have been all year.

While Powell and others keep saying the economy is strong, the only data they consistently point to is the labor market. But the job market is a lagging indicator and even it looks shaky. As Schiff pointed out during an interview with Laura Ingraham, we’ve seen three straight weeks of increasing first-time jobless claims, and they’re at the highest level since October last year.

Meanwhile, if you look at that last job report, even though we added about 400,000 jobs in the establishment survey, the household survey lost about that many jobs. But if you actually look at the jobs, almost all of these new jobs were for people who already had jobs. These were people taking second and third jobs because they’re struggling to pay the bills. And you have a lot of retirees who are being forced back into the workforce because inflation has eviscerated their incomes, and now they have no choice but to go to work. So, these are not jobs that people want. These are jobs that people are forced to take because the economy is so weak.”

Meanwhile, we’re seeing big pullbacks in the housing market, manufacturing and retail. And the average American isn’t buying the “economy is fine” narrative. Consumer confidence fell to a 19-month low in July.

This is eerily similar to the early days of the 2008 recession when the mainstream media and government officials kept saying everything was fine even as the economy was going up in flames.

No Stomach for This Fight

This economy was built on easy money and debt. It looks like taking away the easy money punch bowl has already popped the bubble. This latest rate hike will only make the rip in the bubble bigger, letting the air out even faster. It’s only a matter of time before the entire house of cards economy collapses.

In reality, this needs to happen. The economy needs a recession to cleanse all of the misallocations and distortions out of the economy. But that would mean a lot of pain. Despite the recent hikes and all of the tough talk, one has to wonder if the Fed has the stomach to follow through with this inflation fight and allow the economy to crash to the ground.

For now, the central bankers at the Fed and the policymakers in DC can try to spin away the recession in the hope that inflation will magically go away before things get really bad, so they can go back to business as usual. By “business as usual,” I mean borrowing and spending and printing money out of thin air.

The trajectory of balance sheet reduction reveals that the Fed doesn’t really have the stomach for this inflation fight.

The FOMC statement claimed that “the Committee will continue reducing its holdings of Treasury securities and agency debt and agency mortgage-backed securities, as described in the Plans for Reducing the Size of the Federal Reserve’s Balance Sheet that were issued in May.”

The problem with this statement is that it’s now the end of July and the Fed still isn’t reducing the size of its balance as described by the plan.

At the time, I noted that this wasn’t an impressive balance sheet roll-off given the historically high CPI. At $95 billion per month, it would take 7.8 years for the Fed to shrink its balance sheet back to pre-pandemic levels. And it’s not even keeping pace with its own tepid plan.

If the Fed was really serious about fighting inflation, it would be rapidly shrinking the money supply.

So, the question remains: is the Fed at the end of its rope? And when it inevitably reaches that point will it let go, keep tightening to fight inflation, and take the economy into freefall? Or will it surrender to inflation and pivot back to easy money and quantitative easing, letting inflation run wild in order to rescue the economy?