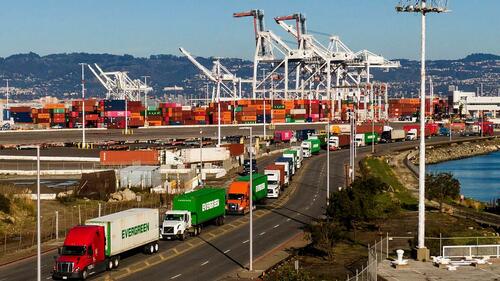 By Clarissa Hawes of FreightWaves On Monday, Robert Bernardo, director of communications for the Port of Oakland, confirmed to FreightWaves that “the court needed more time to review before they made their final decision.”

Miguel Silva, who owns an intermodal company in Oakland, attended Monday’s Zoom hearing on behalf of his owner-operator, Prudencio Umana, who is one of the named defendants in the port’s suit against truckers protesting a controversial state law, AB5.

He said it’s a small victory that Gee stated he is taking the matter under advisement before issuing his ruling.

“Instead of ruling in favor of the city and the port, which have unlimited resources and power, the judge is taking a closer look, which is a small victory for the owner-operators who don’t have any money to hire a legal team,” Silva said.

He said Umana, who is in his mid-70s, doesn’t speak much English and wasn’t a protester. He was in the wrong place at the wrong time.

“He had gone down to talk to the drivers and eat some food that the drivers were cooking onsite, but he didn’t participate in the protest,” Silva told FreightWaves. “I think it’s a shame that many of these drivers fled their home countries over government intimidation practices and they come here and the Port of Oakland is engaging in the same tactics. It’s mind-blowing.”

A private investigator, Joshua Prentiss, who was hired by the port, videotaped Umana and others as they left in their vehicles and later looked up their license plates and discovered their identities in the California Department of Motor Vehicles registry.

After Umana was served with the legal paperwork, he brought the documents to Silva to read. However, it was too late on Friday to find an attorney to represent him over the weekend, Silva said.

“Another driver, Filmon Teklehaimanot, who was also named in the suit, said he had just received the paperwork two days ago and had no idea what all of this legalese means,” Silva said. “The driver said it was a peaceful protest and there were no imminent threats by the truckers and that the protest was over.”

Bill Aboudi, owner of Oakland-based AB Trucking, said normally when a person is being sued, the defendant(s) have 30 days to respond to the complaint. While the original hearing was set for Sept. 26 to hear the City of Oakland and port officials’ complaint for injunctive relief and the TRO, it was moved up three weeks and rescheduled for Monday.

Besides the five named defendants, the complaint also includes Does 1-2000, inclusive, in the suit.

The suit states that the port and the public “are suffering irreparable damage as the result of a loosely organized group of independent owner-operator trucks, led by the defendants and those acting in concert with the defendants, who have unlawfully blockaded access to international maritime cargo shipping portals at the port for several days.”

As of publication, attorneys for the city and the Port of Oakland, including Richard Elder of Lubin Olson & Niewiadomski, as well as port attorneys Mary Richardson and Catrina Fobian, did not respond to FreightWaves’ phone calls or email requests seeking comment about the court filings.

While some truckers protested on July 25 inside the designated “safe protest areas,” reports from drayage companies that serve the port said none blocked terminal gates or prevented trucks from entering or exiting the port.

The Oakland Police Department told FreightWaves Tuesday that no truckers were cited during the weeklong protest that started on July 18.

“The port initiated legal action last week to stop truckers from illegally blocking marine terminal gates and halting international trade,” Bernardo told FreightWaves. “The requested temporary restraining order and injunction would prohibit the named individuals — and all those acting in concert with them — from illegal actions that stop the flow of commerce at the Port of Oakland. The port respects and is not seeking to restrict the truckers’ First Amendment rights.”

However, the protests were over by the time attorneys representing the city and the port filed the complaints.

“In terms of timeline, this legal action was initiated during the protests and it can take time for courts to process the request. That’s why the drivers were contacted after the protests were already over,” Bernardo said.

Drayage companies that serve the Port of Oakland said the four marine terminals canceled work shifts on two separate days ahead of knowing if protesters were going to be back the following day and not in response to “safety risks” as alleged by Desmond DeMoss, safety and business continuity officer for the Port of Oakland, in court documents.

While nearly 100 International Longshore and Warehouse Union Local 10 workers refused to cross the protest line on July 19 as owner-operators blocked the gates of the SSA terminal, FreightWaves was in Oakland and listened to some of the conversations between the longshoreman and truck drivers outside the gates. Some offered tips on where to stand and hold up signs to block certain gates to “be more effective.”

Others said the truckers needed to arrive at the terminals before 6 a.m. to block gate access or else the ILWU workers would have “no excuse not to work.”

“We are working without a contract right now so we support the owner-operators and understand what they are trying to do,” said George, a nine-year ILWU member, who didn’t want to give his last name for fear of retaliation.

Judge Gee didn’t state when he would issue his ruling.

Oakland protesters, who own their own rigs and currently choose which loads they want to take, don’t want to work as company drivers as many would be forced to do under AB5. The truckers had hoped California Gov. Gavin Newsom would issue an exemption or a carve-out for them as he’s done for other industries. However, that didn’t happen.

Approximately 70,000 owner-operators in California may be forced out of business because of AB5.

Ongoing legal challenges prevented AB5 from going into effect in January 2020. The law stems from the California Supreme Court’s decision against Dynamex Operations West Inc., a package and document delivery company. The court found that Dynamex had misclassified its delivery drivers as independent contractors rather than employees and that all California-based companies that use independent contractors must follow the “ABC test,” a three-pronged determination whether a worker is an employee.

The B prong defines an independent contractor as a worker who is engaged in “work that is outside the usual course of the hiring entity’s business.” That is problematic for motor carriers utilizing independent owner-operators to move freight.”

Independent contractors in Oakland say they want to work but won’t be able to under AB5.

“These owner-operators are willing to work hard for the Port of Oakland and move as many containers as they possibly can but their ability to work is being taken away by the governor and our legislature that refuses to listen to us,” Kim Sulsar-Campos, vice president of Oakland-based Iraheta Bros. Trucking, told FreightWaves. “Independent contractors in Oakland didn’t have the money to lobby against AB5 so the drivers thought this was their only opportunity to be heard.”