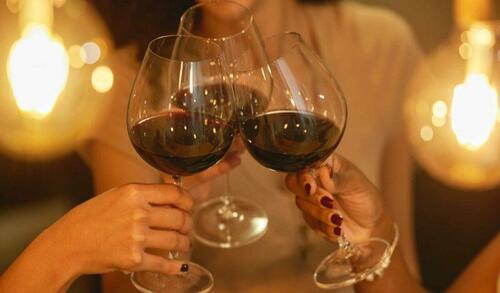 Authored by Jeffrey Tucker via The Brownstone Institute,

Many of us with a libertarian frame of mind presume as a matter of theory that the interests of business are at odds with those of government. That’s generally true for businesses of a certain size. The regulations and taxes one faces in running an enterprise in the “land of free” are utterly shocking, as any small business owner can tell you. Even gaining the legal right to pay an employee is an arduous undertaking.

But matters change for any large businesses, especially industry leaders.

Here the problem of mutual capture – business deeply involved in regulatory agencies to the point that which is the hand and which is the glove is not clear – is pervasive. It’s been an issue since the Gilded Age, as historians know.

It’s always worse in a war, when the opportunities for racketeering by ostensibly private enterprise are legion. That includes the war on the virus, which has been brutal on small businesses but a fabulous reward for large media enterprises.

Rarely do we experience this in such a direct way as we did during the pandemic.

We were amazed to see huge corporations that control vast amounts of digital communications openly censoring on behalf of the CDC and the WHO.

We know because they said so, and still do. Perhaps we might have assumed that administrators of these companies were as confused about the science as the politicians were. Maybe it was civic pride at work here.

A trove of emails obtained by America First Legal tells a far more alarming story. The 286-page stack of correspondence reveals a cozy and daily working relationship between people in a position of control between Twitter, Facebook, Google, the CDC, NIH, and the WHO. They shared strategies, advertising ideas, and messaging. They talked up grants and privileges for each other, all designed to crush and exclude contrary narratives. They set up meetings and shared mutual compliments.

In one page, the CDC flagged posts that it did not like and Twitter responded. This was a period in which people were being targeted for banning by Twitter. It was never clear why some posts got through and some were triggers for bans. Now we know why: the CDC essentially produced a hit list. 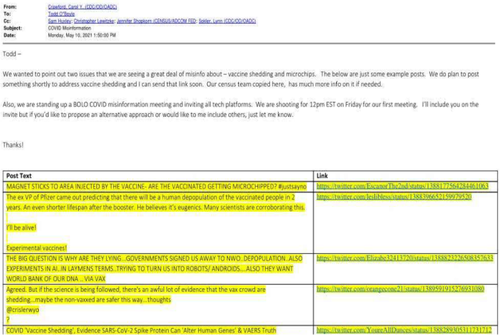 Among those targeted was Naomi Wolf, who, so far as I know, was the first to reveal the relationship between vaccination and irregular menstrual patterns. For talking about this subject, she was permanently banned by Twitter. This direct hit was ordered by the CDC itself. 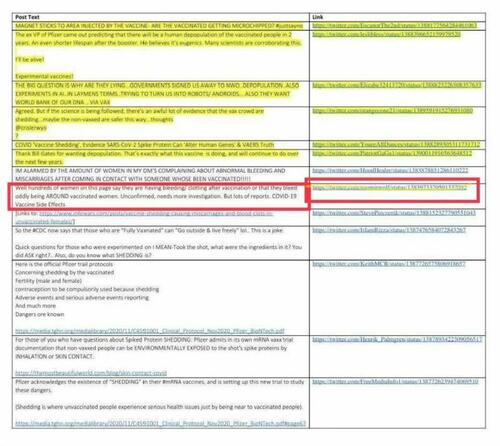 Now, you might say, whatever you might believe about the flagged posts, this is a violation of the First Amendment! It’s fine for Twitter to have its own terms of use and kick people off as it sees fit. It’s something else entirely when the company is acting on the exhortations of deep-state bureaucrats who find themselves annoyed that someone believes in the right to exercise free speech. Surely there will be years of court challenges to this practice, as there should be.

What you have here is a government profoundly aware of the legal limits on its own ability to shut down dissenting voices, and thereby leaning on private enterprise to do the deed. But very clearly they did not have to lean too hard. Tragically, there were high-end people at these companies who were very excited to do the government’s bidding. That was all about suppressing human liberty, and gagging the people who worried that this might not be a good idea.

Ever since reading through these emails, I’ve been struck by the strange friendliness of all the emails. There is obvious absence of the supposed conflict between enterprise and government that animates most conversation between left, right, and libertarian. Indeed, they all seem highly collegial and filled with mutual flattery, as if making these connections and plotting the messaging amounted to doing a solid and professional job. The lack of self-awareness is palpable.

The relationship between Big Tech – and all aspiring reporters and enterprises – is very clearly complex, and elusive of ideological categorization. It is also corrupt, exploitative of the interests of the people, and at odds with the interest of Enlightenment values. How can freedom stand a chance when it is so viciously squeezed between the controlling interest groups, who are the powerful in society?

They believe they are the lords and we are the peasants.

Here is an example of what I mean. Last week, Anthony Fauci deigned to appear in the show Rising, as sponsored by The Hill. It was in this interview that Fauci said that if he had it to do over again, he would have pushed “more stringent restrictions.” He also claimed that he “didn’t recommend locking anything down,” which is unbearably untrue.

What’s more interesting is the backdrop to preparation for the interview. A leading reporter for the show is Kim Iversen, who would have loved the chance to question Fauci based on her extensive reporting and knowledge of all things Covid. At the last moment, she was blocked from being on.

The remaining two reporters were clearly aware of the corporate need to go pretty easy on Fauci. Why? We know from his extensive emails that he is hyper-focused on curating his media appearances. He doesn’t want uncomfortable questions. He turns down most requests and is thereby in a position to extract concessions from venues. The venues want him on the show to drive traffic and credibility.

You can watch the appearance here and make your own judgment on how it went in the absence of Ms. Iversen.

Ms. Iversen is a rare case of a reporter who has no interest in playing the game. After all this transpired, she quit the show based on her conviction that if she cannot report the truth, there really is no point in staying with a company. Clearly, in her view, The Hill was more interested in maintaining good relations with deep-state actors than in reporting the truth. So she bailed, and god bless her for that.

This is but a small look at the much deeper problem, which is the symbiotic relationship between the administrative state, Big Tech, and Big Media. They work together to forge a narrative and stick to it. We know that now better than we ever have. This involves shutting down dissident voices and curating content in a way that serves ruling-class interests.

Two weeks ago, I wrote the following:

This is why, while journalists can often hound elected politicians and their appointees, from Watergate to Russiagate and every “gate” in between, they tend towards a hands-off approach to the massive administrative bureaucracies that hold the real power in modern democracies. The press and the deep state live off each other. What that means is ominous to consider: what you read in the papers and hear on TV from the industry-dominant sources is nothing more than an amplification of deep-state priorities and propaganda. The problem has been growing for well over a hundred years and now it is the source of enormous corruption on all sides.

I observed this before the recent revelations of the direct relationship between social media and Covid enforcers. You are welcome to look at the emails here and form your own judgment. What we see here is not tension, much less conflict, but unity. Unity in what? My strong impression is that it is unity in power. They know they have it, are thrilled to exercise it, and happy to be in touch with others of the same ilk.

For want of a better phrase, we might call this profound “class consciousness” of the 1% of technology admins and bureaucratic managers in government. The distinction between the two is no longer clear, which should be confounding for any political worldview that posits an inherent conflict between public and private.

We can add to this class observation something even more tactile. The Bill & Melinda Gates Foundation, which exercised outsized influence on the pandemic response, has also funded nearly all mainstream media venues to the tune of $315 million, the details of which are reported here.

From this we can observe that it is not only class but also money: more precisely, the two go together. It makes it all-the-more offensive that this philanthropic empire which pushed the lockdowns and funded the media empires that controlled the narrative was built in the old fashioned way: by making and selling computers and software.

There’s an apocryphal quote attributed to Vladimir Lenin that predicted how capitalists would sell the rope from which they would eventually hang. He probably never said that. The truth of our times is just as grim. The freedoms that have been taken away from us made possible the fortunes that have led to the advance of serfdom and poverty the world over.

Making matters worse, there’s an ongoing plot to make it very difficult even to complain about it. Unless you happen upon the right channels, media sources, research institutes, and journalists, you can be made to believe that you are nothing but what they consider you to be: a peasant without rights, free only to do and say that to which they grant you permission. And no more.