Goldman Turns Bearish: The Bottom Is Not In Yet And The Higher This Rally Goes, The Greater The Fall

Earlier today we said that JPM’s 7th and unstated reason why the rally would continue is that Goldman sellside desk warned that “without clear signs of a positive shift in macro momentum, temporary re-risking could actually increase risks of another leg lower in the market rather than signal the end of the bear market.” And since Goldman’s sellside desk is – whether on purpose or purely by accident – always wrong, and since Goldman is currently aligned with the Fed itself in hoping talk jawbone risk assets lower, we said that the translation is: “we are going up.”

But maybe this time Goldman is right?

Let’s take a deeper look at Goldman’s contrarian – and for once bearish – take to see if any of its observations are relevant.

Our aggregate measure had turned increasingly bearish since the start of the year and moved below the levels reached around Russia’s invasion of Ukraine, before showing some signs of recovery since the start of July. Tentative reversals in our aggregate positioning and sentiment measure have been common YTD, but so far they have generally proved to be fairly limited and only temporary in nature.

And while Goldman thinks “a further increase in positioning is possible near-term (which could further support the current rally), without clear signs of a positive shift in macro momentum, temporary re-risking could actually increase risks of another leg lower in the market rather than signal the end of the bear market.” This, Goldman warns, is particularly the case if the positive shift is driven by the systematic community – which as we noted last week it is, “and not by fundamental investors.”

Furthermore, “despite the recent rebound in our positioning indicator, we are not convinced that we are past the ‘true’ trough in positioning just yet, and we think the path from here is likely to become more dependent on macroeconomic data.“

In other words, Goldman believes that absent a fundamental reversal to the upside, the technical rally is just another bear market bounce, and will go down even faster than it went up. While that is certainly true, the question is when will the reversal take place, and as we first, and then JPM said, the meltup could continue for a good while until the Fed finally decides to get involved with more than just words (as attempts to jawbone stocks lower have failed dramatically).

Reading down the Goldman note, Mariotti writes that looking across the different components of Goldman’s risk  indicator, she sees one important difference compared with earlier in the year: while most of the sentiment and fast-moving indicators had already turned quite bearish owing to the less friendly inflation/growth mix coupled with less supportive monetary policy across the major Central Banks, fund flows into equities have finally declined through the June risk-off as investors’ concerns have shifted from inflation to growth 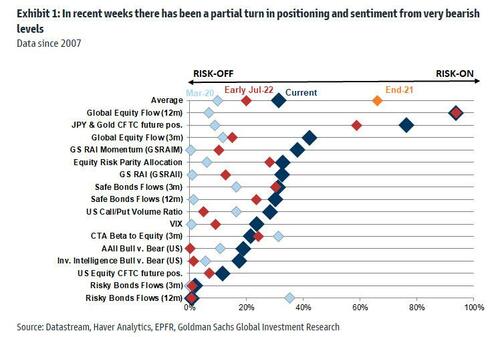 In particular, global equity fund flows have slowed down on a 3-month basis and other risky assets such as credit have registered record outflows over 12 months. As Goldman has claimed previously, equity fund flows were the last pocket of the market to remain ‘risk on’; therefore, the recent weakness can contribute to narrowing the large gap that had built up between measures related to investors’ sentiment relative to positioning. As shown in Exhibit 3, the bank’s proprietary database of European and US multi-asset funds also suggests a sharp contraction in equity demand: net purchases of equity dropped to record lows in 2022 Q2.

The slowdown in overall fund flows is consistent with what Goldman claims is retail investors being on a de-risking trajectory since Q1 (which is wrong). Here Goldman’s internal estimates show a material slowdown in net buying of S&P 500 stocks from retail investors, who the bank claims “have likely turned increasingly pessimistic alongside the sharp sell-off of stocks generally favored by retail investors.” Of course, as we pointed out yesterday using much more accurate fund flow data, we know this is also dead wrong. Goldman is at least somewhat right in correctly noting that the recent meltup has coincided with a hiatus in selling by retail, although the bank notes that the combination of an inflationary environment eroding households’ purchasing power – real disposable income has fallen sharply in the US – and savings rates being back to pre-pandemic levels “can put further pressures on retail investors’ flows.” This is particularly relevant as households – alongside corporates – have been one of the largest sources of US equity demand in the post-pandemic cycle.

On the flip side, realizing that being too bearish would disastrous for the traditionally permabullish bank, as it would be accused by its clients of having trapped them into a market crash, Goldman says it has seen signs of a rebound in futures positioning: specifically, net US equities futures positioning of asset managers has bounced from its lows. 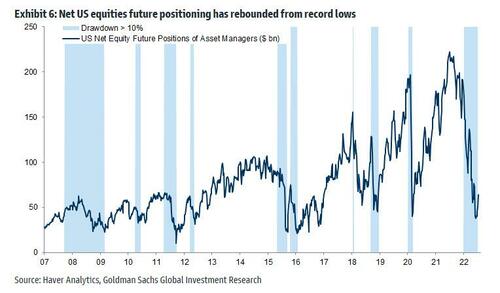 Furthermore, among non-dealers, asset managers’ positioning tends to be the most closely correlated to performance, with troughs historically coinciding with the bottom in the equity market. In general, the bank notes, temporary unwinds from extremely bearish levels can contribute to fueling and supporting some rallies in equities. The current low levels of liquidity, which we have repeatedly warned would accelerate a powerful bounce when it hit – which it did a little over a month ago – and which are likely to persist over the summer, are also contributing in exacerbating market moves. This dynamic has played out in the bear market rallies we have seen YTD, including the current one, and could still have further room to go, especially if equity volatility continues to reset lower.

Goldman then finally touches on what we have been saying for the past two weeks has been the critical catalyst for the meltup, namely the surge in buying by systematic investors: as Mariotti notes, “a further re-set in equity volatility can drive an increase in positioning across systematic investors such as CTAs, which are active in the futures market, at least in the near term.” She next claims that contrary to what the market clearly demonstrates, “the extent of such re-risking has been limited so far,” and according to Goldman’s estimates “the beta of CTAs to equity has somewhat increased, although it is still negative – but, if extended, it could contribute to further relief in the equity market.” Similarly, risk parity strategies might be pushed to add risk if the VIX remains in the low 20s and rate volatility continues to be under pressure.

Needless to say, we have highlighted all of this previously, and warned that a major squeeze is now in play.

Goldman next points out another characteristic of the current meltup, namely that there is “still very few signs of re-risking in the hedge fund community despite the equity rally of the past few weeks – in fact, our data suggest the deleveraging process is ongoing, with net exposure re-setting towards pre-Covid levels.” That, of course, is extremely bullish as it is only a matter of time before FOMO kicks in.

Looking ahead, the Goldman sell-side team (not to be confused with the bank’s flow traders whose research is far more accurate, detailed and difficult to come by and is available only to professional subs on a daily basis) thinks that a further increase in positioning is possible near-term (which could further support the current rally) but “without clear signs of a positive shift in macro momentum, temporary re-risking could actually increase risks of another leg lower in the market rather than signal the end of the bear market.” This, Goldman notes, “is particularly the case if the positive shift is driven by the systematic community and not by fundamental investors. In fact, without broader conviction across investors on the healthiness of the rebound, the current low levels of volatility might be difficult to sustain and systematic strategies might be quite quick in de-risking in such a scenario.”

In short: just as we said last Friday, the meltup will continue – most likely until some action from the Fed short-circuits the reflexive buying – at which point stocks will puke, probably hitting fresh 2022 lows, at which point the Fed’s dovish pivot will be complete and any and all high beta risk assets will soar to record levels.

There is more in the full note available to pro subs.