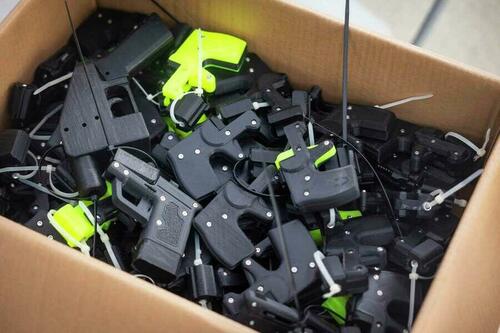 The anonymous man told local news Fox 26 that he made 62 3D-printed guns and handed them over in Houston’s first gun buyback event last weekend. He said the city offered him $50 per gun, cutting him a check for $3,100.

The man said the cost of production per gun was $3, netting a profit of $47 per weapon. He said, “the goal was not personal profit, but to send [Houston leaders] a message about spending $1 million tax dollars on something that has no evidence of any effect on crime…”

He added another goal: to make the city “pay fair prices [at gun buyback events], use private donations rather than tax dollars, and don’t destroy historic guns.”

Houston Mayor Sylvester Turner was not enthusiastic about the man using the gun buyback program to print money. He said the next gun buyback event “will exclude 3D-printed guns … this is a program designed for people who want to voluntarily relinquish their guns.”

“You’ll always have people who will try and take advantage of the programs,” said Turner. “I was there when that person brought in those guns. The reason we went ahead and did that was we had not said we weren’t going to.”

Even though the anonymous man made a fool of Houston city officials, Turner said Saturday’s gun buyback was a success, removing 840 firearms from the streets.

What’s strange is that Houston’s ban on ghost guns from future buyback events comes as the federal and state governments have waged war against homemade firearms. Just look at the story count for “ghost guns” exploded after the Biden administration took office in 2021.

Pro-gun accounts had fun with the news:

Wait, so what’s the point? I was told these were the most dangerous of guns that only criminals used

It seems they are afraid of ghosts.

When there’s a gun buy-back nearby, your 3D printer become a money printer.

Or no, just keep your guns

Fine. I will just keep all of my homemade, printed, untraceable guns. You get what you pay for.