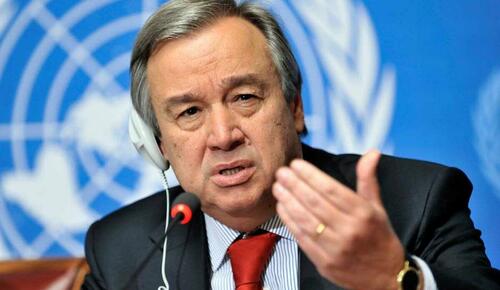 NATO governments and globalist institutions have put on a good show acting as if they hate Putin and the Russian advance in Ukraine, but the reality is that the war acts as an all encompassing distraction from the greater agenda at hand.  It offers globalist organizations, western politicians and central banks a perfect scapegoat for the ongoing economic instability caused by THEIR policies.

As anyone that follows alternative economic knows, the stagflationary crisis that is escalating today was triggered well before the Russian invasion of Ukraine.  Price inflation was hitting 40 year highs in December of 2021, months before the war started.  Gas prices were skyrocketing long before sanctions on Russia were ever implemented, climbing from an average of $2.20 per gallon in November of 2020 to $5 per gallon in June of 2022.  That’s more than a 100% increase in less than two years and most of it occurred before Ukraine was an issue.

What really caused stagflation?  It’s a process initiated by central bank stimulus that the alternative media has been warning about for many years.  The real culprits are central bankers and the politicians that align with them.  The world has been awash in fiat money as a means to prolong economic corrections that should have been allowed to run their course a long time ago.  Instead, bankers sought to artificially prop up the system and funnel money into “too big to fail” corporations along with the too big to fail stock markets.  Now, of course, things are changing.

The inevitable Catch-22 dynamic has come into play – Central banks can continue to print and keep interest rates near zero, but inflation will rapidly expand, making all their efforts pointless as rising costs lead to plummeting demand.  Or, they can stop all stimulus and hike interest rates to stall the inflationary disaster, but still collapse markets, employment numbers and consumer demand.  The bottom line is that there is no path to a soft landing; it simply doesn’t exist.

The covid pandemic was really the straw that broke the camel’s back – Not because of the virus, but because of the RESPONSE to the virus.  The authoritarian lockdowns and the subsequent covid stimulus packages poured gasoline on the economic fire.  With over $6 trillion of helicopter money pumped into the US system in a single year, the system that was on the verge of implosion is now fully crashing.  Time is running out.

All blame has been initially directed at Joe Biden, and though he has played a large part in the disaster, it’s not really his crisis.  The central banks created this avalanche since 2008 and now we are finally seeing the poisonous fruits of their labors.  Presidents come and go, but central bank policy does not change unless the bankers want it to.

With the Ukraine war (and now a potential war between China and Taiwan), the banks and political elites must be jumping for joy.  All eyes were increasingly falling on them but now they have some very well timed distractions to blame all the world’s economic ills.

UN Secretary-General Antonio Guterres is milking the Ukraine crisis for all it’s worth in his latest engagement with the world press.  Stating that:

“We are doing all we can to reduce suffering and save lives in Ukraine and the region, through our humanitarian operations… But the war is also having a huge and multi-dimensional impact far beyond Ukraine, through a threefold crisis of access to food, energy and finance.”

In other words, he seeks to continue the false narrative that the economic crisis is all Russia’s fault.  He then move’s on the the secondary narrative that “Big Oil” is also partially to blame:

“…It is immoral for oil and gas companies to be making record profits from this energy crisis on the backs of the poorest people and communities and at a massive cost to the climate…I urge people everywhere to send a clear message to the fossil fuel industry and their financiers that this grotesque greed is punishing the poorest and most vulnerable people, while destroying our only common home, the planet.”

In this statement we find multiple lies.  First, oil companies are seeing larger profits because of the stronger dollar in international trade.  As the Fed increases interest rates the dollar index climbs against foreign currencies, and because the dollar is the global petrocurrency this means that oil companies will be raking in more dollars which accumulate more wealth through foreign exchange.  This is not a situation which will last long, but for now, anything that sells in dollars is going to create considerable profits.

Secondly, say what you want about the oil companies, but they didn’t create the energy crisis.  Inflation was caused by central banks and NATO sanctions against Russia are doing the rest.  There is a distinct communist tone to the UN Sec-Gen’s speech and a clear attempt to disparage capitalism and profits when these things have absolutely nothing to do with the overall threat.

The extreme economic calamity that would be created by climate change policies cannot be understated.  Millions of people will die if the UN gets what it wants.  That said, if there is already an economic calamity in play because of stagflation and supply chain disruptions, they figure they can force climate controls into place and no one will notice.

If regional wars in Ukraine, Taiwan and elsewhere erupt and continue for the next 8 years, then the public could be led to believe that the economic disaster was indeed caused by foreign wars and “evil nationalism” rather than globalist policies and central bank money printing.  They are already planting the propaganda today in preparation for the next decade of events.  The last thing the elites want is for the populace to aim their anger at at them.

Furthermore, large scale chaos calls for large scale solutions.  If you want to change the world rapidly while erasing generations of traditions, heritage, principles, laws and freedoms, then you have to break the old system and get people to beg for a new one.   People have to believe it was their idea to change everything, that way they don’t rebel in the future.

The UN is playing a game of inoculation; planting misinformation today in advance of disasters they know will happen tomorrow.