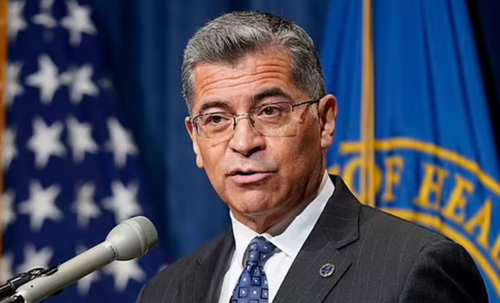 “I want to make an announcement today that I will be declaring a public health emergency,” HHS Secretary Xavier Becerra said during a Thursday call with reporters.

“We’re prepared to take our response to the next level in addressing this virus.”

“We urge every American to kick monkey pox seriously and to take responsibility and help us tackle this virus,” he continued.

The Biden administration is planning to declare a public health emergency over monkeypox as soon as Thursday, the Washington Post reports, citing ‘two officials who spoke on the condition of anonymity’ – possibly after Nancy Pelosi loaded up on monkeypox stonks.

The declaration – an effort to ‘galvanize awareness and unlock additional flexibility and funding to fight the virus’ spread’ – would come from Health and Human Services Secretary Xavier Becerra, who is also considering a second declaration which would allow federal officials to ‘expedite medical countermeasures, such as potential treatments and vaccines, without going through full-fledged federal reviews,’ the Post continues.

The administration’s announcement follows similar decisions by health officials in New York, California and Illinois and global health leaders. The World Health Organization on July 23 declared that monkeypox was a public health emergency of international concern, its highest-level warning, after confirmed outbreaks in about 70 countries where the virus has not historically spread. -WaPo

According to the report, policymakers have argued over whether to declare the disease a public health emergency – which is no surprise considering that the vast majority of transmission occurs between gay men, to the point that the World Health Organization has urged gay men to ‘temporarily limit their number of sexual partners.’

Yet, looks like the Biden admin is going full throttle on monkeypox into midterms – with the White House naming longtime FEMA official, Robert J. Fenton, to head up the national response to monkeypox earlier this week.

Federal officials have identified 1.6 million people as ‘highest risk’ for monkeypox, however the US has only received enough doses of Bavarian Nordic’s Jynneos vaccine – the only FDA-approved shot to protect against the virus – for around 550,000 people.

More than 6,600 cases of monkeypox have been confirmed in the United States since May 18 with the vast majority occurring among men who have sex with men — a total that has doubled about every 8 days, but which experts believe is a significant undercount. Officials have also reported at least five cases of monkeypox in children, who are believed to have gotten infected through household transmission.

While health officials have stressed that monkeypox poses far fewer risks than coronavirus — with just a handful of deaths globally and none to date in the United States — the virus can lead to fever, swollen lymph nodes, rash and often painful lesions that can last for weeks and result in scarring. The virus also is linked to more severe complications in children, pregnant women and people with immune conditions. -WaPo

Monkeypox, which comes from the same family of viruses as smallpox, spreads primarily through skin-to-skin close contact – mostly during sexual activity. As the Post notes, ‘the virus spreads through other forms of touch and can circulate outside the gay community, noting a handful of cases in women and children.’

According to Politico, the Biden administration and US public health officials have developed a ‘decision memo’ which will govern the monkeypox public health emergency.