Space Junk Crashing Back To Earth Becomes A Problem 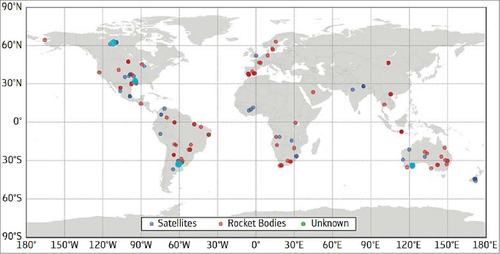 As countries and private companies increase space exploration, orbital missions have unleashed thousands of pieces of debris into orbit. The junk consists of rocket boosters, defunct satellites, and spaceborne shrapnel that is at risk of crashing down to Earth, and over the last few weeks, two separate incidents highlighted the growing threat to people and infrastructure.

A few years back, the European Space Agency (ESA) warned about the worsening space junk situation jamming up Earth’s orbit. In 2020, there were an estimated 160 million objects in orbit, and growing as the number of space missions has exponentially increased.

The latest piece of space junk that uncontrollably tumbled back to Earth was on July 30 when China’s Long March 5B rocket (weighing a staggering 23 tons) crashed into the Sulu Sea, nearly missing Palawan Island in the Philippines.

Another incident on July 9 involved space junk from an old SpaceX mission that landed in rural Australia.

SpaceX has not confirmed if the pieces were part of a Crew-1 Dragon spacecraft mission from early 2021, but space debris tracker Jonathan McDowell tweeted on July 29 that they were likely unpressurized “trunk” pieces of Dragon.

Dalgety is indeed near to the trunk’s reentry path on Jul 8.
The object is a good match to one of the Dragon trunk fins, pic.twitter.com/KQk4237dv8

Two incidents of space debris crashing back to Earth in July alone is a concern for people and infrastructure on the ground.

In a study recently published in Nature Astronomy, titled Unnecessary risks created by uncontrolled rocket entries, researchers say there’s a 10% probability that one or more casualties will occur from uncontrolled space junk re-entries over the next decade.

“Most space launches result in uncontrolled rocket body reentries, creating casualty risks for people on the ground, at sea and in aeroplanes,” according to the study. “These risks have long been treated as negligible, but the number of rocket bodies abandoned in orbit is growing, while rocket bodies from past launches continue to reenter the atmosphere due to gas drag.”

“Those national governments whose populations are being put at risk should demand that major spacefaring states act, together, to mandate controlled rocket reentries, create meaningful consequences for non-compliance and thus eliminate the risks for everyone,” it concluded.

Earlier this year, we noted a powerful geomagnetic storm knocked dozens of Starlink satellites out of orbit.