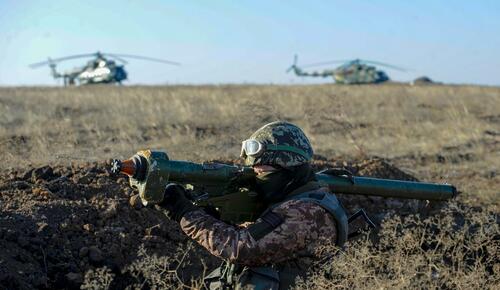 In what’s looking to be endless weapons transfers to Ukraine, the US Defense Department on Monday unveiled yet another $1 billion in additional security assistance to the Ukrainian military.

“The package adds to about $8.8 billion in aid the United States has given Ukraine since Russia’s invasion on Feb. 24,” Reuters reports. “It includes munitions for HIMARS, NASAMS surface-to-air missile system ammunition and as many as 50 M113 armored medical transports.”

For those trying to tally the math of where this puts all defense monies committed to Ukraine thus far, the DoD statement includes the following:

The DoD announcement emphasizes the weapons and munitions package includes “the types of which the Ukrainian people are using so effectively to defend their country.” However, the last two months have witnessed consistently bad news for Ukraine coming out of Donbas, where Russian forces have of late made most gains.

How it started: “Tax the Rich”

How it’s going: Another billion dollars to Ukraine, and now 87,000 new IRS agents to go after the middle class and the poors

The official DoD website lists the latest arms in this new package as follows:

Meanwhile, following a rare CBS News expose which estimated that only some 30% of US-supplied weapons are actually making it to their intended recipients in the Ukrainian army, concerns have grown not only over potential black market activities centered on US weaponry, but also the country’s well documented recent history of corruption…

I guess I never knew walking around money for corrupt oligarchs who are busy filling their suitcases with cash before they leave the country forever was a “budget need.” Learn something new every day. https://t.co/fUWgUmgypF

The US television channel CBS posted on Twitter and later deleted it that only 30% of US weapons supplied to Ukraine reach the frontline‌‌.#Ukraine #USA #Russia #Russia #Ukraine #NATO pic.twitter.com/BDRPxCGsRN

This as a fresh $4.5 billion in US taxpayer money is additionally being sent for vague sounding “budget needs,” per a Monday announcement from the US Agency for International Development.

“The funding, coordinated with the U.S. Treasury Department through the World Bank, will go to the Ukraine government in tranches, beginning with a $3 billion disbursement in August, USAID, the Agency for International Development, said,” Reuters reports. “It follows previous transfers of $1.7 billion in July and $1.3 billion in June, USAID said.”