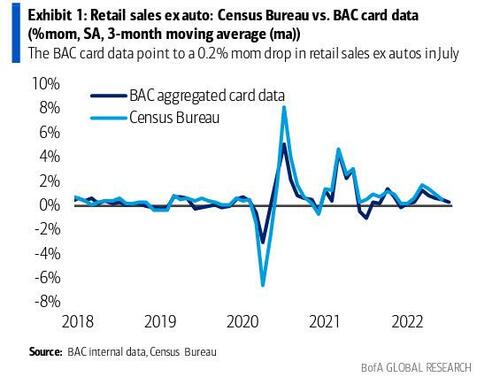 In the aftermath of the recent plunge in gas prices, which has pulled the national average price to just above $4.00, two months after hitting an all time high north of $5.00, traders have been curious to see how retail spending will be impacted by this welcome development. And while the official data will be published next Wednesday, today we got an early glimpse thanks to the latest BofA card spending data which measures aggregated BofA credit and debit card data, and which was up 5.3% year-over-year (yoy) on a per household (HH) basis in July.

To be sure, the July number was artificially inflated in part by Prime Day and related promotions, which occurred in June last year. Which is why on an adjusted basis, July card spending per HH fell 0.2% month-over-month. It’s also why BofA’s economists forecast a 0.2% mom decrease in the Census Bureau’s July retail sales ex-autos figure, well below consensus of a +0.2% print. 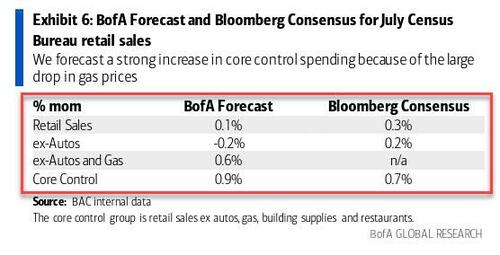 But in a favorable twist, July’s ostensible weakness was partly due to the plunge in gas prices, which led to a 5.8% mom drop in gas spending 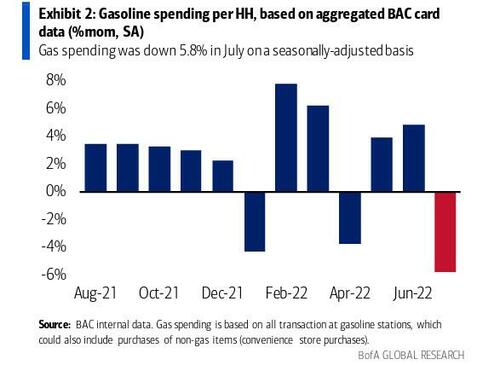 According to BofA calculations, the share of gas in retail card spending ex autos fell by 0.7%, the largest single-month decline since April 2020 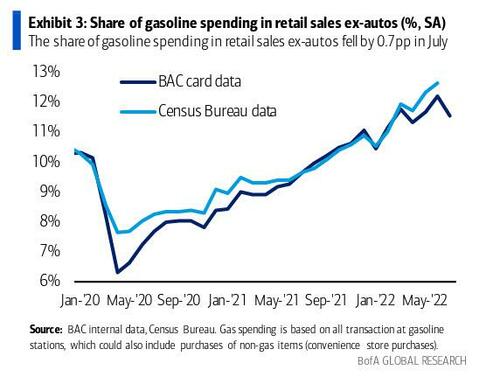 This has given consumers leeway to spend in other categories, and BofA expects a 0.9% mom increase in the Census Bureau’s core control retail sales print (retail sales ex autos gas, building materials and restaurants). And since the bank is forecasting soft headline inflation, it expects reported real (inflation-adjusted) consumer spending to rise sharply in July.

Digging deeper, BofA finds that the intra-month data show a broad increase in yoy spending growth in the latter part of July, particularly among lower-income households… 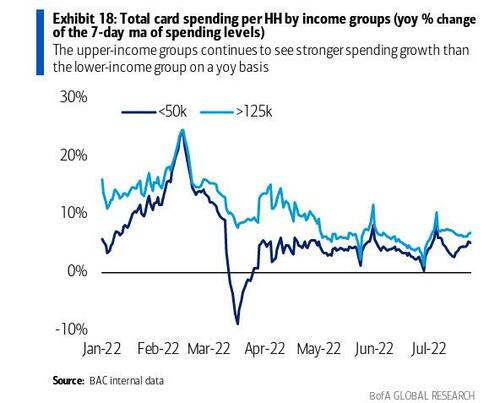 … where categories that benefited include clothing, restaurants and airlines. 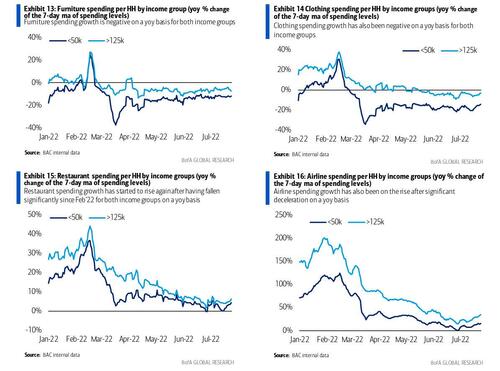 According to BofA, “these trends bear watching – it remains to be seen whether they are driven primarily by lower gas prices or favorable base effects from last year’s Delta variant wave (which continued through Labor Day).” Meanwhile, the share of retail brick and mortar (B&M) spending outside households’ Metropolitan Statistical Areas (MSAs) and in foreign countries remains well above pre-pandemic levels.

This suggests that the boom in summer vacation spending continues.

How about continued signs of stress among lower-income households, an ominous development highlighted recently by the like of Walmart? According to BofA, the share of credit cards in total card spending is only up slightly relative to last year, and is below the pre-pandemic share for all but the top income cohort. 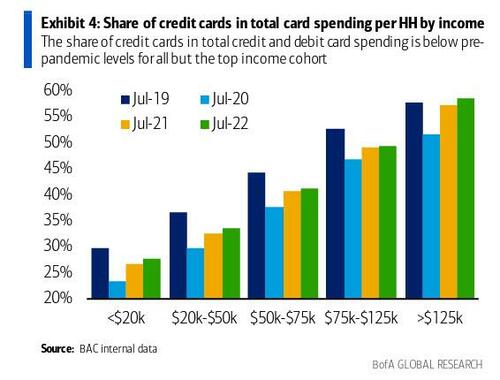 This suggests that on average, liquidity constraints have not made lower-income HHs significantly more reliant on credit. Moreover, discretionary spending has held up quite well among lower-income households over the last several months 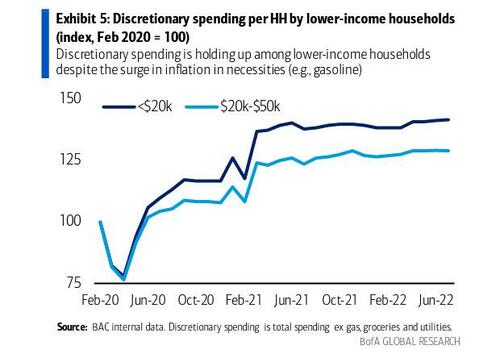 Putting it all together, especially in the context of the recent US slide into a technical recession when two weeks ago 2Q GDP growth came in negative at -0.9% for the 2nd quarter in a row, BofA writes that “last Friday’s very strong jobs report went a long way towards allaying recession fears” and adds that “if the signal from the BAC card data is accurate, we are now probably looking at a solid start to economic activity in 3Q” and while the bank still expects a recession to start by year-end, it thinks “the risks are skewed towards a delay of a few months” which would give the Fed more room to tighten policy (before having to unwind it all), and is why BofA raised its forecast of the terminal fed funds range by 25bp to 3.50-3.75% after the July jobs report, warning that “risks to the view are still to the upside.”