The meme stock euphoria that characterized the past week of trading and which sent names like BBBY, GME and AMC soaring…

… is conspicuously absent today, with Goldman’s meme stock basket tumbling as much as 6% and last down 4.1% on pace to end a six-day gain …

… if still up solidly on the month.

So having sparked a major short-squeeze storm – and generated substantial gains in a very short period of time – are retail investors now rushing to get the hell out of Dodge? It may come as a surprise to some, but according to Fidelity, retail investors are doubling down on shares of meme stocks including Bed Bath & Beyond and AMC Entertainment on Tuesday, even as the powerful meme stonk rally that showed shades of last year’s mania sputtered.

Bed Bath was the second most-bought asset on Fidelity’s platform, trailing only Tesla, with buy orders overpowering sells at a more than 2:1 ratio

AMC shares saw the fourth-most interest with buys outpacing sells at a 1.6:1 clip, with NVDA in 3rd position. 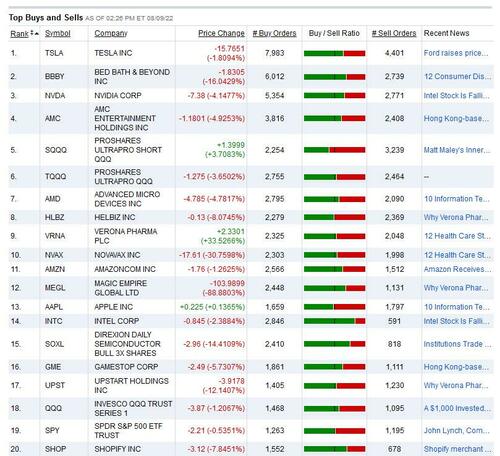 BBBY was trending in retail chatroom Stocktwits, while tickers for both BBBY and GME were among the most mentioned on Reddit’s notorious WallStreetBets forum. 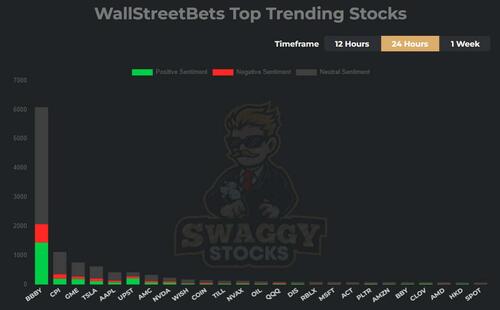 Elsewhere, Vanda Research data showed that retail traders had snapped up $16.64 million of Bed Bath on Monday for the largest daily net buy since early November, with net buys over the nine-day rally rising to $31 million. This is after retail investors bought $20.34 million of AMC shares on Monday, the largest daily net buy since the end of March.