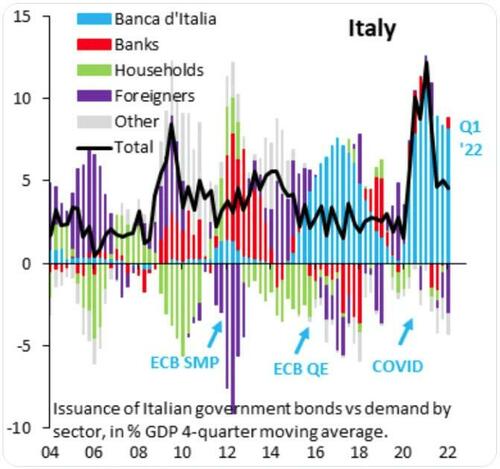 Were it not for ECB’s country-specific QE, Italy’s bond yields would be soaring…

We've flagged the lack of demand for Italy's debt for over a year: (i) domestic demand is zero; (ii) foreigners are selling; (iii) ECB is the only buyer. This should be a matter of great urgency for Italy's politicians. But it isn't as ECB QE and now reinvestments provide cover. pic.twitter.com/uI5FM8TwWo

Data from ECB, chart by Mish 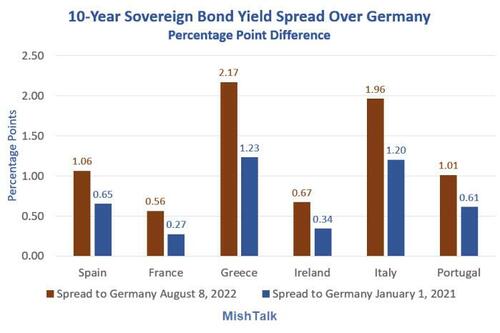 Italy and Greece are on life support. Were it not for arguably illegal country-specific QE by the ECB, Greek and Italian bond yields would be through the roof.

ECB president Christine Lagarde has said many times the central bank won’t allow financial conditions across the euro area to diverge significantly and is ready to do whatever is needed to avoid it.

On July 26, 2012, after Greece 10-year bonds exploded to nearly 30 percent, then ECB president Mario Draghi (now Italy’s Prime Minister) gave a speech announcing “We will do whatever it takes to preserve the Euro, and believe me it will be enough.”

After the announcement yield spreads plunged.

Q: What did Draghi do?
A: Nothing!

The bluff worked then. It’s not working for Lagarde now as evidenced by spreads and the chart by Robin Brooks.

The bull market in bonds is over, and with that Danielle DiMartino Booth see a “Global Depression” Threat