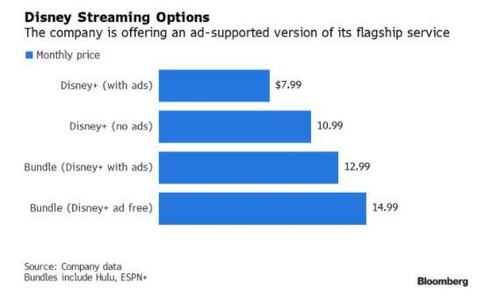 A few weeks after Netflix finally surprised with an earnings beat after what seemed like an eternity of misses, moments ago Disney also came out of the Q2 earnings gate blazing, with numbers that smashed expectations (the company added 14.4 million new Disney+ subs, smashing estimates of 9.8 million) and announcing that it is raising the price of its flagship Disney+ streaming service by 38% to $11, part of a plan to generate more revenue for its money-losing online businesses and build on third-quarter results that beat estimates for sales, profit and subscriber growth. Prices for some packages that include Hulu and ESPN+ will also rise. The uber-woke mouse also took a page out of the NFLX playbook and said that on Dec. 8, Disney will introduce an ad-supported version of the flagship streaming service.

Here are the details:

Despite the solid top-line results, operating losses at the direct-to-consumer business, which includes the streaming services, more than tripled to $1.06 billion as the company continues to invest in new programming and expand to new territories. That was worse than the $697 million analysts expected.

Profit in Disney’s traditional TV business, which includes the ABC and ESPN networks, rose 13% to $2.47 billion, thanks to higher ad revenue and fees from cable distributors. Programming costs were flat to down.

Profit at the company’s theme parks, a star in recent months as consumers went on vacations again after two years of the pandemic, rose sixfold to $2.19 billion. US resorts were the main driver, while international parks lost money and consumer products delivered only a modest increase.

The company reported a 26% jump in sales for its film studio to $2.11 billion, but suffered a loss of $27 million as the strong performance of “Doctor Strange in the Multiverse of Madness” in theaters was offset by lower home-entertainment revenue.

The breakdown of the company’s new pricing tiers will be as follows, including the ad-free version:

The introduction of an ad-supported tier is meant to boost subscribers and generate more revenue by giving customers options for how much they want to pay for the service. Disney said last month it sold $9 billion of ads for the upcoming TV season, with 40% of that going to its online offerings. Current Disney+ subscribers will begin seeing the ad-supported version unless they agree to pay more for the commercial-free plan.

According to Bloomberg, the price increases, subscriber gains and the strong Q3 performance from theme parks may help reverse investor sentiment that sent the shares down 27% this year through Wednesday’s close.

Disney – the world’s largest entertainment company – has been trying to stem losses in its direct-to-consumer business as it navigates a transition from traditional TV viewing to online options. Disney+, which launched in November 2019, and includes films and TV shows from the company’s vast library, as well as new series tied to company brands such as Marvel and “Star Wars” remains unprofitable. Disney has said it expects Disney+ to be profitable in fiscal 2024.

Shares of Disney rose as much as 6.1% to $119.33 in extended trading after the announcement. 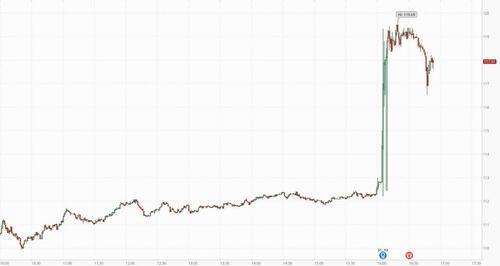