“Millions Will Freeze This Winter; Or Fall Into Debt To Avoid Doing So” 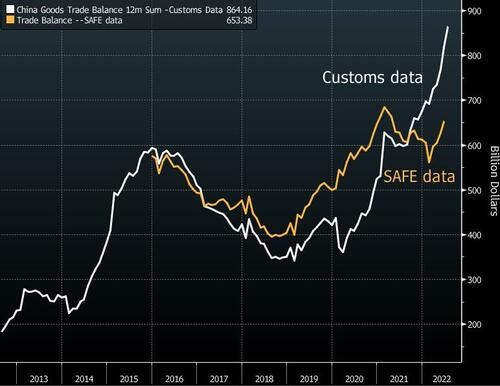 Yes, today is finally inflation day! Not high unit labor cost inflation day – that was yesterday in the US, which is why markets sold off. Not house price inflation day – that’s every day. I mean actual headline and core US CPI day, where increases in the price of just about everything are likely to be offset by temporary declines in gasoline prices. Yet that still opens the door for a new pre-US mid-terms phase of “sic transitory gloria mundi” back-patting in markets and politics.

We also get inflation in China (CPI and PPI), which will show it is firmly under control. That’s largely because they are pumping out coal and have over-supply and under-demand. However, also note this is an economy where Bloomberg notes that the huge headline trade data are NOT matched by the trade-related money flows recorded by SAFE. There are technical reasons why the two differ, but now the simple message is: “China “bought” lots of goods from abroad, but they have never arrived.” It could be supply-chain related, or it could be capital flight. Either way, don’t trust the simple headline numbers on your screen.

Indeed, today’s marvelous magical ‘turn around’ in US inflation is because of base effects. The 0.0% m-o-m CPI headline print this July will line up against a far higher print from July 2021. The problem is that the 0.0% is then the base for whatever July 2023 will be – and it will be lucky to be another 0.0%, even this far out, when you look at how the deck is stacked in some regards.

As a parallel, despite potential champagne corks today, UK household power bills are now likely to soar to as much as £4,200 from January, a staggering increase. Indeed, the government, which is not going to do anything about it until a new PM is chosen, holds a “reasonable worst case scenario” (that is “highly unlikely to materialise”) for losing a sixth of the electricity grid, meaning enforced blackouts that will close down rail networks and public buildings. What is highly likely is that millions will freeze this winter; or fall into debts to avoid doing so; and the result will be deflationary demand for everything else, along with cost-push price increases for everything; and yet government help will just mean the latter inflation and less of the former.

(Relatedly, yesterday on Twitter I saw more bitter political satire speaking to how inflation is being handled in the UK, ostensibly through the eyes of a media correspondent from Papua New Guinea. It begins: “To the island of Shakespeare, where energy companies ring 400% profits, and energy consumers are reduced to ringing Jeremy Vine. In the home of blank verse, nobody can afford to use a meter.” It only gets better from there.)

But don’t worry: headline inflation is slightly lower this month.

Meanwhile, other headlines are about the FBI’s raid on former President Trump’s home. It would appear the potential crime is the removal of classified documents from the White House, a serious, albeit obscure, charge. Yet the declassification of such documents is the president’s prerogative, in which case the issue may not be as it appears.

Clearly, the raid has implications for 2024 because if found guilty, Trump could be barred from seeking federal office. At the same time, the (social) media coverage is again exposing deep polarisation. We have the *very* valid argument that all are equal before the law (even Hunter Biden and Hillary Clinton); on the other, muttering that “If they can go after the former president, they can go after anyone.” Even neutral (and some anti-Trump) observers say that unless concrete charges emerge, all the raid will likely do is cement Trump’s base.

The parallel with the inflation print is that what we see right now is not necessarily what we are going to be seeing in the medium-term.