Outgoing Whole Foods CEO: “I Feel Like Socialists Are Taking Over” 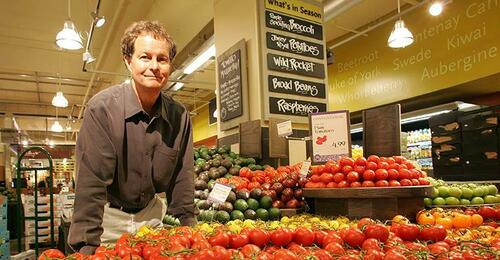 Authored by Nick Gillespie via Reason (emphasis ours),

“My concern is that I feel like socialists are taking over,” Whole Foods CEO John Mackey tells me on today’s show. “They’re marching through the institutions. They’re…taking over education. It looks like they’ve taken over a lot of the corporations. It looks like they’ve taken over the military. And it’s just continuing. You know, I’m a capitalist at heart, and I believe in liberty and capitalism. Those are my twin values. And I feel like, you know, with the way freedom of speech is today, the movement on gun control, a lot of the liberties that I’ve taken for granted most of my life, I think, are under threat.”

If you’re as old as I am (I just turned 59), you will remember how dreary food shopping was before Whole Foods exploded the concept since it came on the scene in 1978. When I was a kid, you were lucky to find two or three types of potatoes in the produce aisle, one type of eggplant, maybe a green bell pepper, and a sad jalapeno or two (jalapenos were almost always sold pickled and in cans). Even in big cities, you had to roam around all over town to find oddball spices that you can now pick up in 7-11s and gas station convenience stores.

At the end of August, Mackey, born in 1953, is retiring from Whole Foods. Throughout his career, John has developed and evangelized for what he calls “conscious capitalism,” or businesses that seek to “create financial, intellectual, social, cultural, emotional, spiritual, physical, and ecological wealth for all of their stakeholders.” That may sound a bit hippy-dippy to you, but John is one of the most hardcore capitalists I’ve ever met, yet also an incredibly spiritual and thoughtful guy who wants to help all of us live better, more interesting lives.

That comes through loud and clear in his epic 2005 debate with Nobel laureate Milton Freidman and former Cypress Semiconductor CEO T.J. Rodgers about rethinking the social responsibility of business. “I believe that the enlightened corporation should try to create value for all of its constituencies,” wrote John. “From an investor’s perspective, the purpose of the business is to maximize profits. But that’s not the purpose for other stakeholders—for customers, employees, suppliers, and the community. Each of those groups will define the purpose of the business in terms of its own needs and desires, and each perspective is valid and legitimate.” In many profound ways, John’s vision is now widely accepted, partly because he’s speaking to a post-industrial world that is rich enough that more and more of us are starting to bump our snouts further up Abraham Maslow’s hierarchy of needs. Even in the developing world, more and more of us are trying to figure out how we can flourish rather than just subsist.

I caught up with John at FreedomFest, the annual gathering in Las Vegas, and we talked about his time at Whole Foods, how his company did an exceptional job of staying open and serving people during COVID, what he thought about the government’s response to the pandemic, and a whole lot more. We also, of course, talked about what he’s going to do once he’s retired.

In terms of business ventures, he’s planning to open a series of wellness centers and cafes. Of greater interest to me, John said that he felt muzzled in his position as CEO of Whole Foods. For many reasons, he says he couldn’t speak his mind on various issues, especially what he sees as a dangerous drift toward more and more control of everyday life, commerce, and speech. That all changes in September, he said, and we should expect him to be even more outspoken in his celebration of capitalism, which he considers the greatest anti-poverty program ever created, and many other issues.