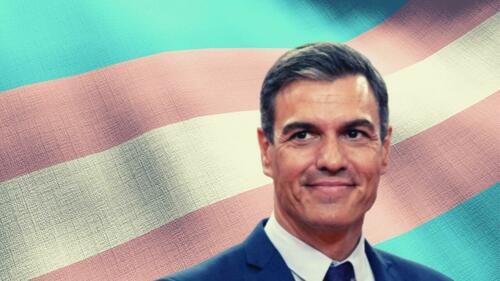 By Olivier Bault of Remix News

A year after it was presented to the Council of Ministers, the draft “Trans Law,” as it is called, was adopted by the Spanish government at the end of June. The lawmakers mostly ignored the criticisms and reservations expressed by the General Council of the Judiciary (CGPJ), which is the Judiciary’s supervising body, and by the Council of State, the main advisory body to the executive branch. This is not to mention the feminist associations, the dissident voices within Sánchez’s Socialist Party (PSOE), and even the voices of health workers against this ideological draft law, which is the expression of the will of an increasingly radical LGBT lobby in favor of affirming “gender identities.”

The “Law for Real and Effective Equality of Trans People and for the Guarantee of LGBTI Rights” penned by the Minister of Equality Irene Montero of the far-left party Podemos has even been criticized from a feminist position by the Sánchez government’s former vice-president (from June 2018 to July 2021), Carmen Calvo, a PSOE MP who now chairs the Equality Committee of the Congress of Deputies, the lower house of Spain’s parliament.

It was precisely because she was unable to impose her classical feminism against the “queer theory” taken on by the extreme left in the Sánchez government, under the leadership of Unidas Podemos’ Irene Montero, that Carmen Calvo was pushed out, consecrating the PSOE’s conversion to gender ideology and the idea that the biological sexual duality between men and women should be replaced, through social engineering, by a wide spectrum of fluctuating “genders” with each person being allowed to choose their own gender at a given time.

Thus, despite the criticisms from Spain’s judicial council CGPJ and the Council of State, the bill that will now be examined by the Spanish parliament, where the ruling socialist-communist coalition counts on the support of the regional pro-independence parties — probably in exchange for new concessions to them — still has provisions, as when it was presented by Montero to the government a year ago, for minors to be able to change their “gender” at will by filing a declaration with the civil registry office.

From the age of 16, they won’t even need their parents’ consent. The parents’ agreement will be required only between the ages of 14 and 16, and a judge will have to rule on children aged 12 to 14 who wish to be identified by the opposite sex or by one of the fast-growing number of “genders” that a constantly evolving gender theory says exist among human beings. Under-12s will not be able to change their sex or gender in the civil registry but will be able to change their name and demand to be treated as children of the opposite sex, including in the use of toilets and changing rooms.

However, a person who commits a crime will be judged according to his or her sex as recorded in the civil registry at the time of the crime.

In order to deny the idea that sexual identity disorders, currently referred to as “gender dysphoria,” can be any kind of pathology, the Spanish government’s proposed Trans Law also includes a ban on any therapy meant to influence or change a person’s sexual orientation or “gender identity.”

Within lesbian couples, the partner of a woman giving birth to a child will also be able to be officially recognized, despite the reality, as the biological mother of the child and will therefore no longer need to go through an adoption procedure to be considered the child’s second mother.

It is also worth remembering that the official EU policy (pushed by the European Court of Justice, the Commission, and the European Parliament) is to impose on all EU member states the recognition of the falsified documents that will consequently be issued by the Spanish authorities.

While the minister of equality now considers that the right to self-determination of one’s “gender” is a constitutional right in Spain, the CGPJ have expressed their concern about the infringement on women’s rights that this law entails and also about the attack on the principle of equality through the positive discrimination effects that it will necessarily have in favor of LGBTIQ people.

Among the most blatant discriminations against heterosexual people that will be brought about by the Spanish Trans Law is the reversal of the burden of proof when a homeowner will be accused of refusing to rent his or her property because of the LGBTIQ sexual orientation or identity of the would-be tenant(s).

In other words, it will now be up to a landlord to prove that his or her refusal of those who wanted to rent his property was not motivated by their non-heterosexual sexual orientation or their “transgender” or “transsexual” gender identity, failing which the landlord will have to pay a very heavy fine of up to €150,000. Consequently, if both LGBTIQ and heterosexual would-be tenants show up, a landlord will have a vested interest in renting to the LGBTIQ ones to avoid risking having to sell his or her property to pay the fine.

Discriminatory laws of this type already exist in Spain, but until now they have been adopted only in some regions, including in regions governed by the center-right Popular Party (PP). This is the case in the Madrid autonomous community, governed by the PP, where under the LGBTI law a biology and geology teacher at a high school in Alcalá de Henares was suspended for six months last year for telling his students in class that there are only two sexes and that a person’s sex depends on their XX or XY chromosomes.

The Council of State, in an opinion issued at the beginning of July, criticized the lack of agreement between the Ministry of Equality and the Ministry of Justice on this bill, as the latter ministry had proposed modifications that were not taken into account in the final bill adopted by the Sánchez government in late June. According to the State Council, some of the Ministry of Justice’s reservations were fully justified, for example, with regard to the unconditional ban on therapies concerning sexual orientation or “gender identity,” which also includes consenting adult patients, who will no longer be allowed to seek specialist care once the bill is voted into law, at least if the left-wing Sánchez’s government gets its way.

Furthermore, just like the Spanish Association of Socialist Feminists (Femes), the Council of State sees a risk of discrimination against women, for example, in sports competitions, and also a risk of decades-long sex equality policies being invalidated by the new law.

Like the CGPJ, the State Council disapproves of the possibility for minors to change their “gender” in the civil registry without their parents’ consent, which is a serious violation of parental rights.

These are so many attacks on the rights and freedoms of citizens and on the much-hailed principle of non-discrimination by a far-left government that knows it does not have to fear any reaction from the EU of the kind Central and Eastern Europe’s conservative governments have to face. Indeed, unlike the Hungarian child protection law, which prohibits propaganda in schools in favor of LGBT lifestyles and gender ideology, and which has led to the Commission blocking the disbursement of NextGenerationEU funds to Hungary, the Spanish bill is fully in line with the new European “values” as understood by the EU institutions dominated by the left-liberal establishment.

Given the circumstances, it is no wonder then that Spain received a second tranche of €12 billion in grants under the recovery and resilience NextGenerationEU plan on July 29. This second tranche came in addition to the €9 billion transferred as an advance payment in August of last year.