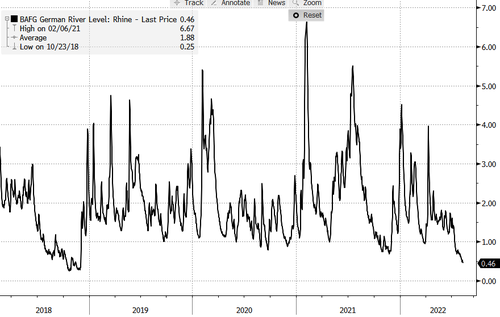 Water levels on the Rhine River are set to drop below a critically low point by the end of this week, making it increasingly difficult for barge transport of goods — including crude oil and coal — as one of the worst energy crises in decades batters Europe.

We noted Wednesday that further up the Rhine is Kaub, Germany, a bottleneck for barges where the river is very narrow and shallow and could fall below 40 centimeters (15.7 inches) by the end of the week. A drop below that level would make it nearly impossible for barges to transit the stretch of the waterway.

New data from the German Federal Waterways and Shipping Administration expects water levels at the key waypoint west of Frankfurt could plunge to 33 centimeters (12.9 inches) by Monday. This extremely low level would mean most barges hauling commodities on Europe’s most important inland waterway that snakes 800 miles (1,300 kilometers) from the Swiss Alps through the largest industrial areas on the continent would be unable to sail through Kaub. 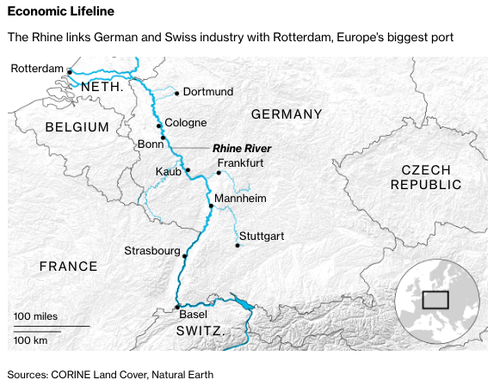 “This is particularly the case for the Rhine, whose nautical bottleneck at Kaub has very low water levels but which remains navigable for ships with small drafts,” said Tim Alexandrin, a spokesman for Germany’s Transport Ministry. Though by the end of the weekend or early next week, Kaub could potentially fall to 33 centimeters would put it within centimeters of the low levels recorded in October 2018 that led to a shuttering of the waterway.

“The situation is quite dramatic, but not as dramatic yet as in 2018,” said Christian Lorenz, a spokesman for the German logistics company HGK.

Factories on the Rhine are heavily reliant on barge transport. About 4% of freight moved in Germany is carried on waterways, including the Rhine. If sinking water levels at Kaub breach 40 centimeters and fall further early next week, then Germany’s industrial heartland would be in trouble, and the energy crisis would be exacerbated.

“The low levels have come much earlier this time,” Schattenberg said, adding, “if problems we are now observing last longer (than in 2018), the loss of economic value becomes all the more serious.”

Last week, multiple companies along the Rhine reportedly shifted barge transport to trucking and rail networks to avoid logistical headaches on the river. 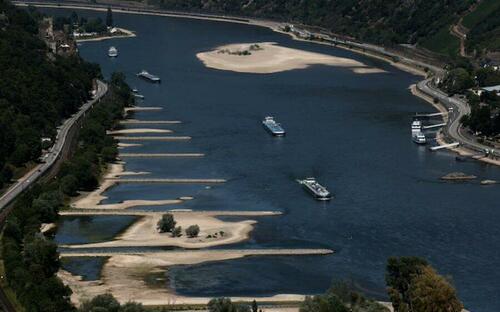 “The product supply situation in central and eastern Europe was already very tight before this latest crisis,” Toril Bosoni, head of the IEA’s oil market division, said in a Bloomberg television interview. “The low water levels make it more costly to get fuel from the seaborne market into that region.”

“This is concerning for landlocked countries that normally get fuel on the Rhine, Bosoni added. “So we’re expecting this situation to continue towards the end of the year.”

The water gauge at the Kaub chokepoint is set to drop by Friday below 40cms — the level typically seen as "impassable" (although a few barges can operate with just 35cms). pic.twitter.com/NSonNZiYie

Andrew Kenningham, the chief Europe economist for Capital Economics, said Germany’s economic growth will be flat in Q3 and a contraction in the last three months of the year, “the low water level in the Rhine simply makes a recession even more likely.”