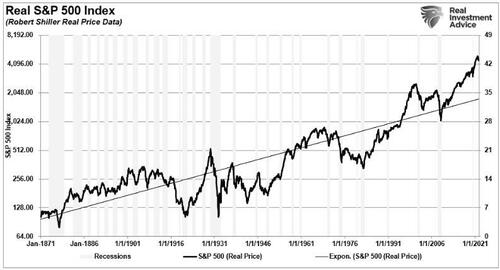 I realize that is a bold statement that flies in the face of mainstream analysis. How often have you seen the following chart presented by an advisor suggesting if you had invested 120 years ago, you would have obtained a 10% annualized return?

It is a true statement that over the very long term, stocks have returned roughly 6% from capital appreciation and 4% from dividends on a nominal basis. However, since inflation has averaged approximately 2.3% over the same period, real returns are closer to 8% annually on average.

The chart below shows the average annual inflation-adjusted total returns (dividends included) since 1928. I used the total return data from Aswath Damodaran, a Stern School of Business professor at New York University. The chart shows that from 1928 to 2021, the market returned 8.48% after inflation. However, notice that after the financial crisis in 2008, returns jumped by an average of four percentage points for the various periods. 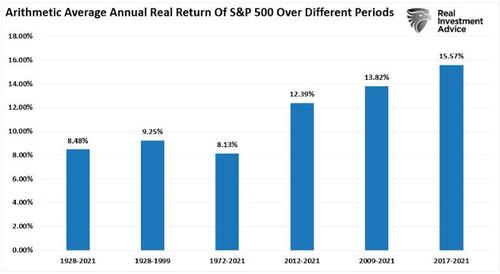 After more than a decade, many investors have become complacent in expecting elevated rates of return from the financial markets. However, can those expectations continue to get met in the future?

The Fed Did It

It is likely no surprise that the surge in returns following the “Financial Crisis” resulted from the Fed’s repeated monetary interventions and zero interest rate policy. 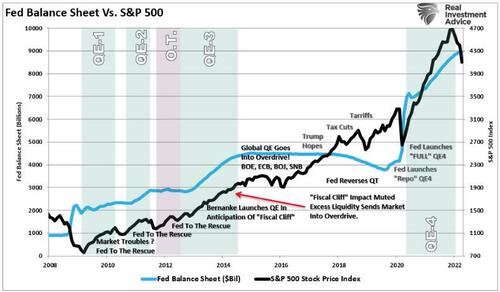 As discussed, those actions and fiscal interventions from the government created the most significant financial bubble in history. 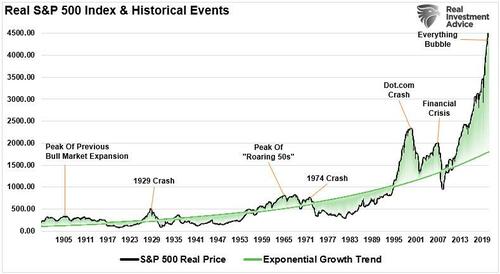 (Usually, when charting long-term stock market prices, I would use a log-scale to minimize the impact of large numbers on the whole. However, in this instance, such is not appropriate as we examine the historical deviations from the underlying growth trend.)

The fiscal policies implemented post the pandemic-driven economic shutdown created a surge in demand that further exacerbated an already extended market. As shown, those fiscal interventions led to an unprecedented surge in earnings. 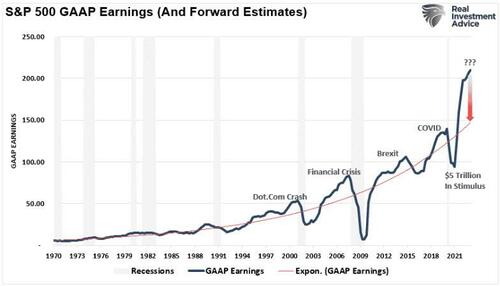 Here is the problem. As shown below, the surge in the M2 money supply is now over. Without further stimulus, earnings must eventually revert to economically sustainable levels. 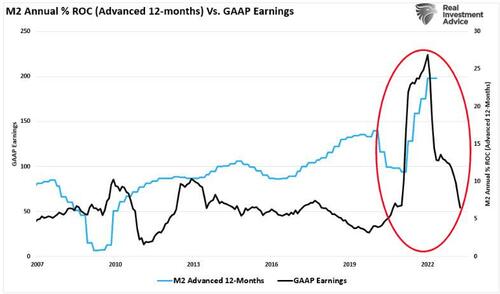 While the media often states that “stocks are not the economy,” it is economic activity that creates corporate revenues and earnings. As such, stocks can not indefinitely grow faster than the economy over long periods.

The Relationship Between The Economy And Earnings

When stocks deviate from the underlying economy, the eventual resolution is lower stock prices. Over time, there is a close relationship between the economy, earnings, and asset prices. For example, the chart below compares the three from 1947 through 2021. 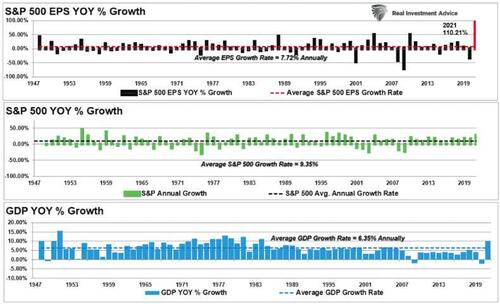 Since 1947, earnings per share have grown at 7.72%, while the economy has expanded by 6.35% annually. That close relationship in growth rates is logical given the significant role that consumer spending has in the GDP equation.

The slight difference is due to periods where earnings can grow faster than the economy when coming out of recession. However, while nominal stock prices have averaged 9.35% (including dividends), reversions to actual economic growth eventually occur. Such is because corporate earnings are a function of consumptive spending, corporate investments, imports, and exports.

The market disconnect from underlying economic activity is due to psychology. As noted above, such has been the case over the last decade, as successive rounds of monetary interventions led investors to believe “this time is different.”

Unfortunately, it never is.

Stocks Or The Economy, Which Is Right?

While not precise, there is a correlation between economic activity and the rise and fall of equity prices. For example, in 2000 and again in 2008, earnings contracted by 54% and 88%, respectively, as economic growth declined. Such was despite calls of never-ending earnings growth before both previous contractions.

(Chart below are annual data through 2021) 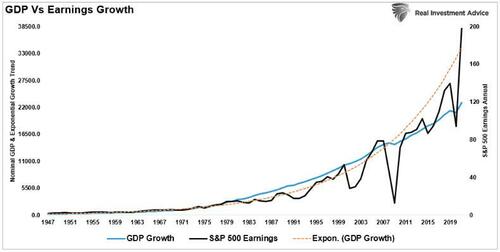 As earnings disappointed, stock prices adjusted by nearly 50% to realign valuations with weaker than expected current earnings and slower future earnings growth. So while the stock market is once again detached from reality, looking at past earnings contractions suggests it won’t be the case for long.

The relationship becomes more evident when looking at the annual change in stock prices relative to the yearly GDP change.

Again, since stock prices get driven by the “psychology” of market participants, there can be periods when markets disconnect from fundamentals.

However, most important to investors is that fundamentals never play “catch up” to stock prices.

“The conclusion is clear: this is not sustainable. The market has outperformed historical returns by a wide margin since 2009. Much of this outsized performance came in the 2017 – 2021 period when returns were 2x higher than long-term historical average.” – Kailash Concepts

The market risk of overly optimistic earnings estimates is high, as are the long-term above-trend returns.

Mean Reversions Are The Biggest Risk

Earlier this year, Jeremy Grantham made headlines with his market outlook titled “Let The Wild Rumpus Begin.” The crux of the article gets summed up in the following paragraph.

Today in the U.S. we are in the fourth superbubble of the last hundred years.”

As noted above, the deviation from long-term growth trends is unsustainable. Such was caused by repeated financial interventions by the Federal Reserve. Therefore, unless the Federal Reverse is committed to a never-ending program of zero interest rates and quantitative easing, the eventual reversion of returns to their long-term means is inevitable.

Such will solely result in profit margins and earnings returning to levels that align with actual economic activity. As Jeremy Grantham once noted:

“Profit margins are probably the most mean-reverting series in finance. And if profit margins do not mean-revert, then something has gone badly wrong with capitalism. If high profits do not attract competition, there is something wrong with the system, and it is not functioning properly.” – Jeremy Grantham 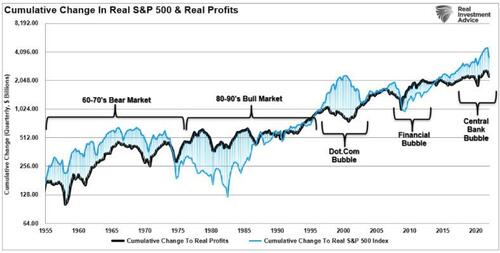 Many things can go wrong in the months ahead.

While investors cling to the “hope” the Fed has everything under control, there is a reasonable chance they don’t.

The next decade could be a disappointment to overly optimistic expectations.