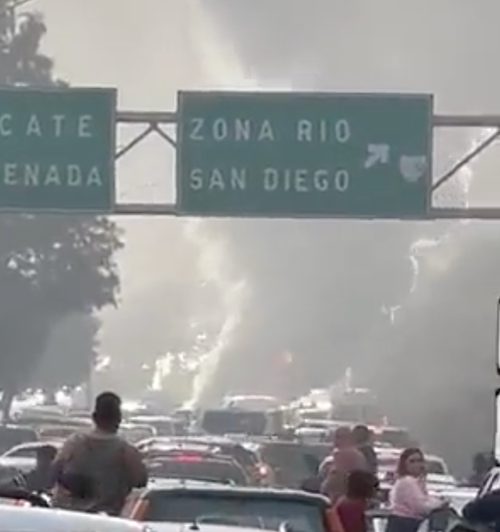 The U.S. Consulate in Tijuana has requested all American government employees to shelter in place until further notice after cartel violence erupted in parts of northern Mexico.

The violence began in Ciudad Juarez, a Mexican city on the Rio Grande, just south of El Paso, Texas, with a prison battle between two rival cartels that left eleven people dead — then the chaos spread outside into the streets of city streets of Juarez, according to the Times of San Diego.

By the weekend, the violence moved west, warranting the U.S. Consulate in Tijuana to advise Americans to shelter in place after a sudden eruption of violent crime.

“The U.S. Consulate General Tijuana is aware of reports of multiple vehicle fires, roadblocks and heavy police activity in Tijuana, Mexicali, Rosarito, Ensenada and Tecate,” the consulate said. “U.S. government employees have been instructed to shelter in place until further notice.”

1/2 The U.S. Consulate General Tijuana is aware of reports of multiple vehicle fires, roadblocks, and heavy police activity in Tijuana, Mexicali, Rosarito, Ensenada, and Tecate. U.S. government employees have been instructed to shelter in place until further notice. pic.twitter.com/oghBX1P7qX

San Deigo County Vice Chair Nora Vargas warned all “binational residents to be cautious and follow the recommendations from government officials and avoid unnecessary travel to allow authorities to do their work and maintain safety. My thoughts are with those impacted by the incidents.”

Here’s footage of the chaos spreading through Tijuana has cartels duke it out.

Narco attack on the U.S. border. The cartels carried out simultaneous attacks in Tijuana, Mexicali, and Tecate. https://t.co/q3YVj9Dqn4

Please be careful if any of you are in Tijuana! The Jalisco Cartel has sent a message to not be out in the streets after 10pm !! pic.twitter.com/gd245mu7uG

LATEST IN MEXICO: 🇲🇽 Residents of Tecate, Tijuana, Playas de Rosarito, Mexicali, and Ensenada are sharing videos of burnt vehicles in the street.

The U.S. Consulate to Tijuana has confirmed the attacks. pic.twitter.com/K46LtytBc5

‘Public transport units are burning simultaneously in Tijuana, Mexicali and Tecate. Armed and hooded men are taking off drivers and passengers to set the vehicles on fire. Baja California’ https://t.co/qGOa93eWLZ pic.twitter.com/a9xtNSvIDC

Tijuana, Mexicali, Rosarito, Ensenada, and Tecate are under seige in Mexico. Many vehicles are being set on fire, stores being set on fire, roadblocks, etc… This is the beginning of War! More updates soon as they come in. Please pray for Mexico and what they are experiencing. pic.twitter.com/jvImLKPuBA

Tijuana is burning!
It was so hard to get home tonight… stay home! pic.twitter.com/Zaq6AhpKhQ

Surreal, I have never seen a Friday without traffic while entering Mexico from the U.S. This is today’s reality due to yesterday’s cartel violence in Ciudad Juárez. Also, right now, Tijuana is experiencing similar violence. #ArdeLaFrontera pic.twitter.com/WTYHiZ6T8U

Tijuana under attack! All of Mexicali, Tecate and Rosarito areas are under high alert! The US border has been shut. pic.twitter.com/GuVgijVvTi

The San Diego Union-Tribune noted has gone into lockdown after the violence.