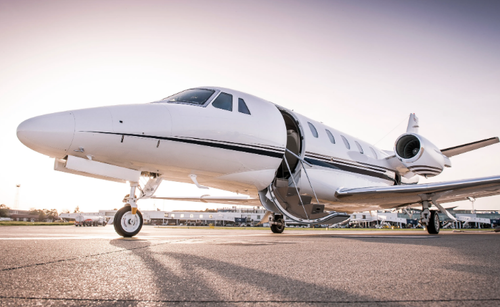 Funny how that happens, right?

And now thanks to the Twitter accounts over at @CelebJets and @ElonJet, we are well aware when people like Kylie Jenner, Taylor Swift or Elon Musk take flight in their private jets. Such was the topic of a new Wall Street Journal report out over the weekend that looked at the backlash to private jet use.

The Twitter accounts make the world privy to each flight, even ones like the 17 minute flight Jenner took in July, resulting in her being branded a “climate criminal”. Jokes about Taylor Swift’s jet usage resulted in memes of her using her jet to go to Starbucks and her refridgerator.

“Taylor’s jet is loaned out regularly to other individuals. To attribute most or all of these trips to her is blatantly incorrect,” Taylor Swift’s spokesperson told the Wall Street Journal.

The owner of the Twitter accounts, 20 year old Jack Sweeney, says he is hoping the data being public will force private fliers “to be more efficient”.

As the WSJ notes, so far the data has only caused climate outrage. But this hasn’t stopped private flights from rising 30% since 2019, the report says. The industry has seen “record growth” since the beginning of the pandemic.

Darren Banham, chief executive of Discovery Jets, a charter and jet management company, told WSJ: “I’ve been in the private jet market for the last 10 years, and on the aviation commercial side for 22, and I’ve never seen the private-jet business like this.”

New customers, including those interested in shared planes and on-demand charter services, are turning up. In fact, 75% of clients at one popular private jet firm, JB Jets, are first time fliers. Every time a celebrity posts about flying private, in addition to fueling outrage, it offers a “tailwind” to the industry. Sometimes people even rent the jets by the hour because of how easy they are to navigate and schedule.

Clients are interested in basic amenities, for the most part, Parker says. “People believe our clients want caviar and Champagne, but believe it or not, they usually want McDonald’s or Burger King. But we usually hear about it if the water is Essentia and not Fiji.”