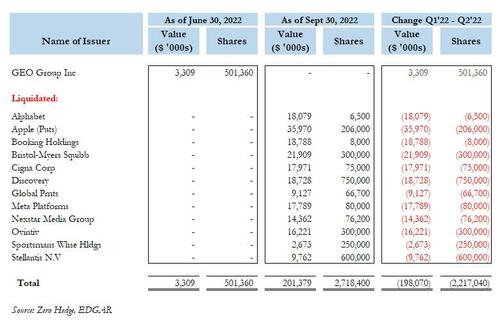 At least the Big Short puts his money where his mouth is… or rather pulls his money as the case may be.

After blasting the latest stock market melt-up as “silliness” and claiming – correctly – that the US economy is facing a gruesome crash in tweets which he then promptly deletes (conveniently, another accounts snapshots his tweets for posterity)…

… Michael Burry – who runs the smallish Scion Capital hedge fund – has done something few of his peers would consider doing: he has traded in line with his statement, and according to his just released 13F, the famed investor has liquidated his entire portfolio which as of March 31, had a notional value of just over $200 million (including $35 million in AAPL put notional), and instead held on to just one stock: private jail operator GEO Group, which he had previously invested in but had dumped all of his holdings at the end of 2021 only to sport a modest $3.3 million, or 501K share position, as of June 30. More notably, and as shown in the chart below, this was the only security he held on to as of the end of Q2.

The news that Burry’s Scion only held shares of the Boca Raton, Florida-based Geo Group, sent its stock surging 12% to $7.68 extending its gain since the end of the second quarter to 14%.

To be sure, Scion’s 13F disclosure, which is required for all money managers overseeing more than $100 million in US stocks, only shows holdings in stocks that trade on the nation’s exchanges. It doesn’t reveal non-US traded securities or short positions. Such filings are also historical, providing a snapshot of a fund’s holdings at the end of a quarter which ended 45 days ago, and may not reflect current investments.

It’s unclear when during Q2 Burry liquidated his entire portfolio. The 51-year-old investor rose to prominence after a winning wager against mortgages in the run-up to the 2008 financial crisis; the outspoken anti-liberal has since become a cult figure on social media, with ominous predictions of a looming downturn. In a May tweet, he raised the specter of a crash similar to the one 14 years ago.