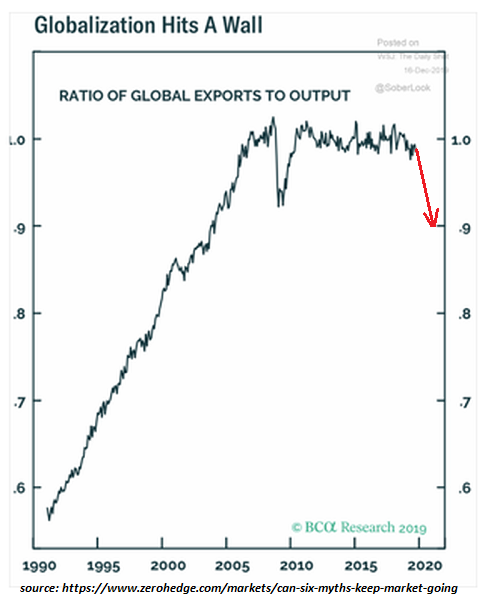 Price cutting is being replaced with price gouging, a substitution that consumers recognize as inflation…

Deglobalization is inflationary because reshoring production increases costs. Securing production from the threats of geopolitical blackmail, civil/economic disorder in the producing nations or broken supply chains requires moving essential supply chains back to the security of the domestic economy.

This move costs money, and production costs are higher in developed economies for all the reasons that drove corporations to move production overseas: labor costs, healthcare, environmental compliance, social benefits and taxes are higher.

Now that resources have been depleted in many producer countries, the costs of producing essential materials is rising. China, a major exporter of rare earth minerals essential to the renewable energy sector, is now exploiting neighbor Myanmar’s resources: Myanmar’s poisoned mountains.

As developing-world nations prospered from manufacturing exports, their workforces have demanded higher pay and improved financial security. Poisoning the water, soil and air is highly profitable but the public pays the price, and eventually the public demands some environmental limits on the toxic dumping of globalization.

The warm and fuzzy narrative of how wonderful globalization was for everyone was always bogus. As I explained back in 2009, importing deflation to the developed world and maximizing profits by turning the developing world into a toxic waste dump was neoliberal capitalism’s “fix” for stagnation: Globalization and China: Neoliberal Capitalism’s Last “Fix” (June 29, 2009).

Globalization enabled mobile capital to swoop in, buy up local assets, create new markets for credit and imported goodies and then sell at the top before all the external costs of globalization came due and the credit bubble burst.

Now that the global credit bubble is bursting, the mobile capital exploitation party is over. Now the game is to exit Periphery nations and move the winnings of globalization to the Core for safekeeping. Globalization lowered costs at the expense of quality, another “win” for Neoliberal Capitalism as planned obsolescence is now the implicit backdrop of globalization: poor quality goods soon fail, requiring the hapless consumer herd to buy a replacement. Since developed-world consumers already have everything (rent a larger storage unit for all your stuff), the only way to goose demand is to crapify everything so replacing low-quality goods with new low-quality goods keeps production lines and profits humming.

This works great until supply chains break down and consumers run out of discretionary income. Globalization only works if every part works perfectly, as redundancy and buffers (inventory, multiple suppliers, etc.) have been stripped to maximize cost-cutting and profits. Now globalized perfection is breaking down and costs rise. Price cutting is being replaced with price gouging, a substitution that consumers recognize as inflation.

Deglobalization is not a quick or painless process. The ride down will be bumpy and cost increases have many sources. Profits will become harder to come by and scarcities will knock down global rows of dominoes in unexpected ways. External costs that piled up for the past 30 years have come due and must be paid.

Inflation isn’t transitory or within the control of central banks. The forces at work are far beyond the reach of central bankers. Cost of credit matters, but so does the real world.

My new book is now available at a 10% discount this month: When You Can’t Go On: Burnout, Reckoning and Renewal. If you found value in this content, please join me in seeking solutions by becoming a $1/month patron of my work via patreon.com.