European Buyback Bonanza Is Set To Fizzle Out 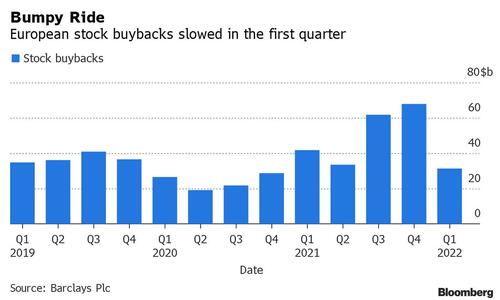 Even though buybacks have fallen from last year’s bumper levels, they’ve remained a source of support for European stocks this year. But a dimmer outlook for company earnings may soon pull the rug from under such forms of return.

The outlook for buybacks has “significantly deteriorated,” says Joachim Klement, head of strategy, accounting and sustainability at Liberum Capital. “Many companies are still relatively cash-rich, but with end demand slowing down, we expect corporate executives to become less inclined to part with cash reserves they may need in a recession.”

Buybacks had already declined sharply going into this year, according to data from Barclays, which showed firms spent $31 billion repurchasing shares in the first quarter, the lowest since the fourth quarter of 2020. And based on new orders for repurchases, regarded as a leading indicator of activity for the practice, a bigger slowdown may be coming, according to Klement. He sees companies on average buying back 1% of their capital annually nine months from now, down from 2.6% today.

As markets sunk in the first half of this year, a basket of stocks with the biggest buybacks outperformed as investors sought haven from a lengthening list of headwinds. But that’s now at risk of unravelling amid a slowdown in earnings momentum, a weaker euro and as Russia’s chokehold of European gas supplies dims the outlook for economic growth.

The trend is already evident in the US — the world’s biggest market for buybacks — where spending on them fell by 21% in the second quarter compared with the first, according to Goldman Sachs strategists.

In Europe, the bank’s strategists expect the percentage of the region’s firms engaging in net buybacks to hit an all-time high this year given rich cash piles and strong balance sheets. But other market watchers say corporates have started sounding more wary about their spending plans.

“Looking at the cautious tone of company guidance on the economic outlook, you would expect companies to be a bit more focused on cash preservation and capital discipline,” says Barclays strategist Emmanuel Cau.

One early signal could come from the financial sector. Buybacks by European banks have held up so far this year as their earnings benefited from the positive outlook for real rates. But as pressure on yields rises due to the gloomy economic outlook, more lenders could get “reactive with buybacks,” Cau says.

Miners including Glencore have also had standout shareholder returnsthis year as a surge in commodity prices drove bumper profits, but the group is among the most vulnerable to a slowdown in economic growth. Cyclically-driven industrials are also exposed.

Buybacks at energy firms, meanwhile, are at risk not just from the deepening gas crisis in Europe, but also from potential regulatory scrutiny driven by “governments’ frustration regarding record profits,” according to Ipek Ozkardeskaya, senior analyst at Swissquote Bank.