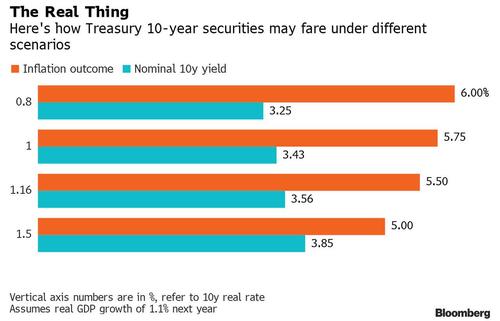 To gauge whether or not the Federal Reserve is approaching the end of its tightening in the current cycle, watch for an increase in real yields across the curve — and for nominal yields to rise in tow.

While the Fed would like to see financial conditions tighten across asset prices, credit spreads and the like, an effective measure of its actions would be how far real rates rise. Chair Jerome Powell himself remarked that “you would have positive real rates” across the curve.

Two-year inflation-adjusted rates, which were around 0.45% as of writing this, peaked at 1.40% in November 2018, one month before the Fed concluded its tightening in the previous cycle. Ten-year real rates, meanwhile, surged to 1.16%.

The two cycles aren’t comparable, not least because headline inflation is running at more than four times the Fed’s target now. But those levels still provide a useful — if minimum — watermark for real rates to approach if financial conditions were to tighten sufficiently.

To decipher what kind of effect that would have on nominal rates, I ran a simulation using real rates and forecast real gross domestic product growth of 1.1% for 2023 — because that’s when I assume the Fed will conclude its tightening — and varying estimates for inflation.

How did this simulation fare the previous time I wrote about it? I posited in April last year, when the Treasury 10-year yield was around 1.66%, that it would rise to 2.72% if real rates touched 0.1%. On May 2 this year, inflation-adjusted rates traded at 0.16% — closing above 0.1% for the first time in this cycle — while the nominal rate was 2.98%.

Interest-rate markets intuitively grasp the reality that the Fed is far from done on raising rates. That is why Treasury 10-year yields have proved sticky even though inflation decelerated to 8.5% in July from 9.1% a month earlier.

Fed Richmond President Thomas Barkin said last week that given the uncertainty around the accuracy of the 2.50% neutral rate, the goal is to have interest rates higher than expected inflation, or positive real rates. The Fed’s dot plot in June projected a PCE inflation of 2.7% for next year, which is consistent with headline inflation of around 3.75%-4% based on historical correlations.

If the Fed is serious about seeking positive real rates, it’s clear that its benchmark rate will need to go beyond those levels on headline inflation. That is considerably above what the markets are pricing in at the moment.

Clearly, the Fed’s task is far from done. For markets obsessed with pricing the end game, it may be worth keeping in mind that decelerating inflation isn’t the same as 2% inflation.