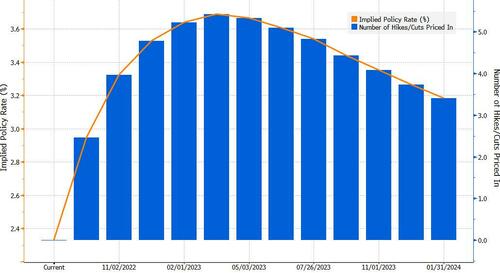 Were the minutes of the Fed’s policy meeting for July dovish?

While some market observers seem to have thought so based on the statement that “it would become appropriate at some point to slow the pace of policy rate increases”, I thought by stating that the Fed wasn’t conceding much. “At some point”, yes, the markets are well aware, but that phrase also implies we aren’t there yet.

Far from it. For better or worse, the Fed believes that July’s 75-basis point rate hike took the Fed funds rate “within the range of…estimates of its longer-run neutral level”. I have argued before that given inflation running at more than four times the Fed’s target, the braking distance to slow price pressures is far longer — meaning the neutral rate isn’t your vanilla 2.50% on the nominal Fed funds rate.

Even so, the minutes concede in the very next breath:

With inflation elevated and expected to remain so over the near term, some participants emphasized that the real federal funds rate would likely still be below shorter-run neutral levels after this meeting’s policy rate.

In other words, some on the policy committee believed that rates would have to rise more to just get into Le Zone Neutral.

And in this kind of inflationary environment, one would think that your friendly neighborhood benchmark needs to be in restrictive territory to bring demand in alignment with skewed supply — which would be an even higher rate. And again, in the Fed’s own words, “…once the policy rate had reached a sufficiently restrictive level, it likely would be appropriate to maintain that level for some time to ensure that inflation was firmly on a path back to 2%”. Nowhere there is the notion of rate cuts anytime soon — as some fairy tales would have us believe.

Do the markets think the minutes were dovish? Just look at Fed fund futures for March next year, which have climbed sharply so far this month. And at those sticky real rates. To me, the minutes were pretty dovish only if you replaced the first four letters with h, a, w and k.