With Bed Bath & Beyond stock tumbling on fears that Ryan Cohen is about to dump his entire 9.5 million share-equivalent stake in the troubled retailer, but not before executing the best gamma pump-and-dump in history, the Reddit ape army appears to have already moved on to its next target: a far smaller pharma microcap which is soaring on massive trading volumes this morning, as a flood of retail investors bet that it just may be the next BBBY-type multi-bagger.

The stock, as we first hinted last night and again very early this morning on our Twitter feed to premium subscribers, is microcap psychedelic pharma company Mind Medicine (MindMed or ticker MNMD) which nearly doubled at one point in early trading, after it was named by 20-year-old “whiz kid investor” Jake Freeman – who as we reported last night made more than $110 million buying Bed Bath and Beyond three weeks ago and cashing out on Aug 16 – as not only his other major holding, but a company where he just went activist last Thursday.

While we know that the 20-year-old USC college student Jake Freeman (who let’s face it, was really just a front for his uncle Dr Scott Freeman especially with the very strong hint that to “realign” BBBY debt, the company should leverage Bed Bath options, i.e., execute a gamma squeeze) already took profits on his 6.2%, $27 million stake in BBBY after the stock soared 5x in three weeks, the tension as we put it, is “where Freeman Capital Management would make its next 5x return in under a month next” and Easter-egged that “actually we know how, and we will reveal it tomorrow.”

The answer was hidden in plain sight in the hyperlink above, which tagged an activist letter to the Kevin O’Leary backed psychedelic pharma company Mind Med (ticker MNMD) sent on Aug 11 by FCM MM Holdings, LLC (the latest incarnation of the same Freeman Capital that made over $110 million Bed bath and Beyond) in which Jake Freeman and his uncle Dr Scott Freeman, the alleged architect behind the BBBY trade activist campaign but more importantly the co-founder and former Chief Medical Officer of MindMed which is the new activist target, reveal they recently amassed a stake in the company amounting to 5.6% of the outstanding stock, or roughly 20 million shares, and one which has yet to be reflected in the Bloomberg HDS page, which would make the activist hedge fund the 2nd largest holder in MNMD (worth mentioning, just like in Bed Bath and Beyond, Citadel just added aggressively to its position in MNMD, becoming the 8th biggest shareholder in the company, and potentially waiting for much more fireworks).

In the letter, the two alongside Orbiter Research executive Chad Boulanger, write that having seen the value of their 5.6% stake in the company “plummet as the stock has fallen from its highs of around $5.77 to $0.70 per share” they are writing to present a plan to turn the Company around. 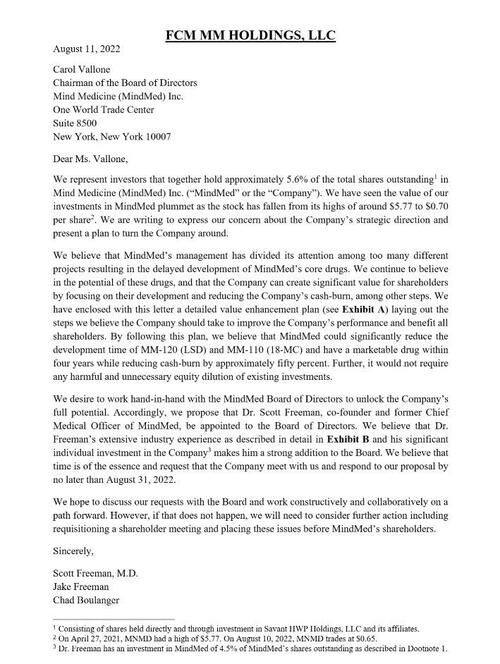 Expanding on the “value enhancement plan” (laid out in detail in Exhibit A to the letter below), they claim that the Company can “create significant value for shareholders by focusing on the development [of key drugs] and reducing the company’s cash burn” and lay out all the steps the company should be taking to improve its performance and “benefit all shareholders.” See Exhibit A in the letter below for more details.

In short, Dr. Freeman hopes to “work hand-in-hand” with the Board of MindMed – which he co-founded – to unlock the Company’s full potential value, thanks to his intimate knowledge of how to turn around the company which he co-founded as he lays out in Exhibit B. 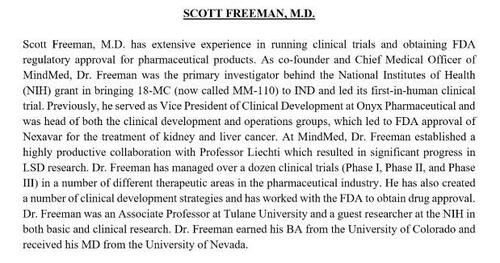 Maybe Dr. Freeman can turn the company around. Maybe he won’t. But what people are really asking is whether the heavily shorted stock…

… whose call options today have exploded in volume… 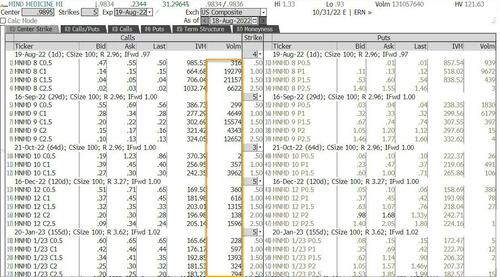 … can pull off a similar short and/or gamma squeeze to that in BBBY.

Considering the modest float, the fact that with barely any newsflow a third of the float has already changed hands this morning,  the potential for a painful short squeeze, and the stated intention to push with their activist campaign until the stock price returns to at least the stated $5-handle, we would not be surprised if Scott Freeman, pardon Jake Freeman, can pull it off again… especially if the Wall Street Bets shifts its attention away from BBBY.

The full letter is below (link)