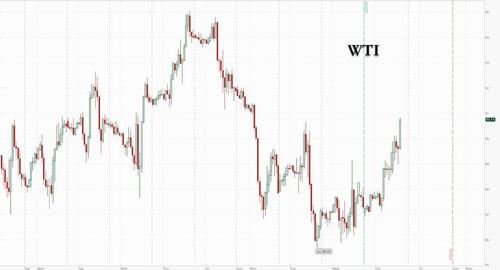 After tumbling in recent weeks, and getting dragged to levels last seen before the Ukraine war, oil is finally showing some of the excitement that sent it to 14 year highs earlier this year and is about to turn green for the week, with both WTI and Brent up about $3 on the day, pushing WTI above $91.

There are several reasons for today’s melt up, starting with Beijing, where President Xi Jinping said China will persist with opening up its economy (athough the comments appeared to reference globalization rather than the country’s Covid-zero policy, but nobody said oil trading algos were smart).

Another factor for today’s upside: water levels on the River Rhine are set to rise over the weekend, providing at least some respite from a crisis that has snarled energy shipments; paradoxically Europe is in just a mess that anything that will make the coming depression a little less acute is seen as positive for commodity prices. And speaking of European energy demands, China’s fuel exports climbed to the highest level in three months after refiners were allocated additional quotas: much of this production is headed toward Europe, and as Bloomberg notes, a fleet of ships carrying diesel is heading for European markets facing energy-security threats from high temperatures, soaring gas prices, and Russian disruption.

Meanwhile, the big driver for the slump earlier this week is fading, and with each passing day that an Iran nuclear deal isn’t announced, traders realize that the big catalyst for the sharp drop on Monday – the “certainty” that Iran would flood the market with more oil – was fake news.

Echoing what we said on Monday, when we predicted that it is in Biden’s best interest to pretend a deal is imminent all the way until the midterms in hopes of keeping a lid on oil prices, i.e. “Biden admin hoping to drip drop positive Iran deal headlines until the midterms”…

THE UNITED STATES HAS RECEIVED THROUGH THE EU IRAN’S COMMENTS ON EU’S NUCLEAR PROPOSAL AND IS STUDYING THEM, STATE DEPT SPOKESPERSON SAYS

… Goldman has subsequently confirmed that a new version of the JCPOA deal is unlikely to happen at all, as the bank’s view “continues to be that a deal is unlikely in the short-term, with a stalemate mutually beneficial for both sides wanting to avoid sanctions (Iran), higher oil prices (US), and political backlash (US).” Consequently, Goldman has now formally dropped an increase in Iranian exports from its monthly balances running to the end of 2023. Some more details (the full Goldman note is available to professional subs in the usual place):

Our view stems from the weak incentives for Iran to want to return to a deal given its maintaining c. 1mb/d oil exports at high prices, record levels of enrichment, and their ultimate medium-term nuclear goals.  In addition, the parallel banking systems that operate to shield Iran’s oil exports from the reach of US secondary sanctions only grow deeper and more effective over time.

An announcement by Iran indicating willingness to entertain nuclear talks is likely intended to draw out further ongoing discussion in our view, before more disruptive counter-measures are potentially taken by the US and its allies.

The US is similarly incentivized to draw out negotiations given stricter sanctions enforcement would exacerbate the oil shortage, while a return to the JCPOA may be politically challenging.…IRNA reported that there were three remaining issues, two on which the US had expressed flexibility, but the last issue – regarding continuity guarantees – depended on the US.

As a non-binding political understanding, rather than a legally binding treaty, the Biden administration is unable to offer such a guarantee.” 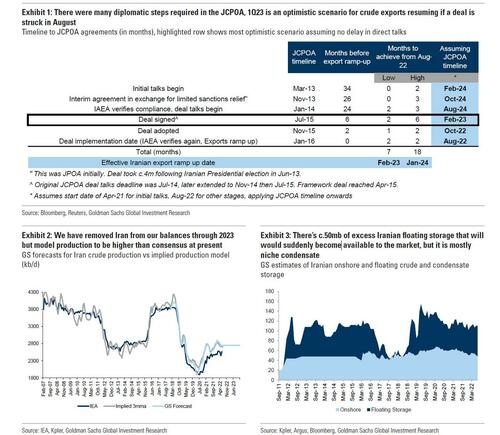 Take away hope for a JCPOA – which has long been the biggest downside oil price catalyst – add the recent surge in gasoline demand, confirming that the DOE’s recent reports of collapsing demand were indeed at beast false (and at worst mandated manipulation) and it is safe to say that we have seen the year’s lows for both oil and gasoline.