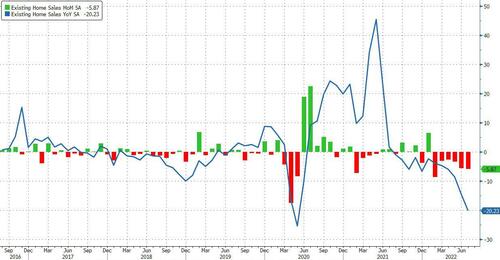 Another month, another plunge in housing.

Hot on the heels of the latest catastrophic homebuilder sentiment print and plunging single-family starts and permits, analysts expected existing home sales to accelerate their recent decline with a 4.9% MoM drop in Julye. They were right in direction but severely wrong in magnitude as existing home sales tumbled tumbled 5.9% MoM in June.

That is the 6h straight month of existing home sales declines – the longest stretch since 2013 – pulling home sales down a stunning 20.2% YoY. From the NAR

“Home sales may soon stabilize since mortgage rates have fallen to near 5%, thereby giving an additional boost of purchasing power to home buyers.”

The collapsing housing market means the SAAR is now below the full year pace of 2012 – one decade ago. 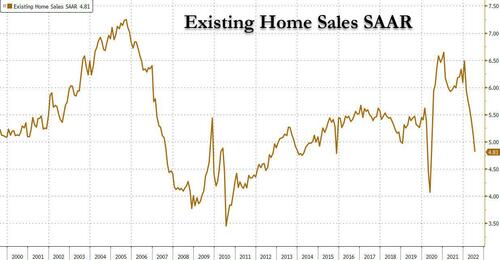 In other words, the market is frozen, but inventory remains at record lows!

“We’re witnessing a housing recession in terms of declining home sales and home building,” Yun said. “However, it’s not a recession in home prices. Inventory remains tight and prices continue to rise nationally with nearly 40% of homes still commanding the full list price.”

Finally, there is some good news – the number of homes for sale rose for the first time in three years on an annual basis to 1.31 million, up from 1.26 in June and the highest since September. At the current sales pace it would take 3.3 months to sell all the homes on the market, marking the fifth straight rise in months’ supply.

Despite hopes that prices would start to roll over – helping with affordability – the median selling price rose 10.8% from a year earlier to a near-record $403,800. First-time buyers accounted for 29% of US sales last month, up from 30% in May.