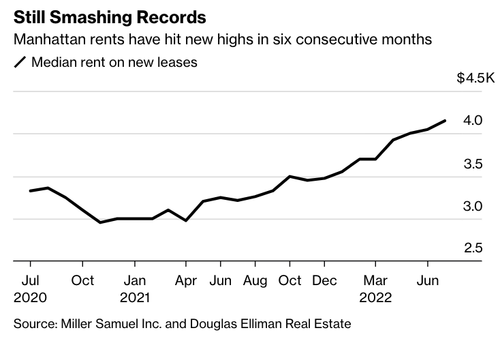 Let’s revisit our housing note from mid-April, “Not A Peak” – Manhattan Apartment Rents Hit Another Record High, correctly pointing out how rent prices would skyrocket this summer.

“It’s so intense. I’ve never seen anything like this before,” Compass Inc. associate broker Kimberly Jay said of the “frenzy” that she’s only seen get wilder over the past several weeks.

On a seasonal basis, peak rental season in New York is underway. We cited data from appraiser Miller Samuel Inc. and brokerage Douglas Elliman Real Estate last week that showed a “record number of records” as median rent on new leases in July rose to new highs of $4,150, up 2.5% from June and 29% from a year earlier.

The chart above doesn’t reveal just how insane rents are in the city. Miller Samuel’s blog posted two charts of year-over-year median rent prices in Manhattan that would make anyone signing a new lease at these levels gasp. 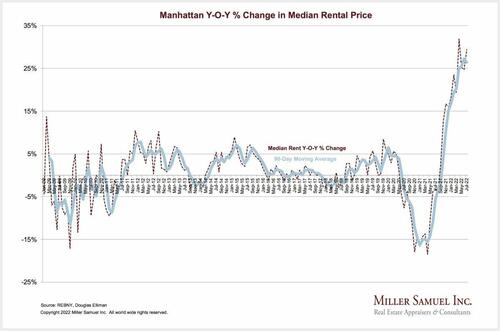 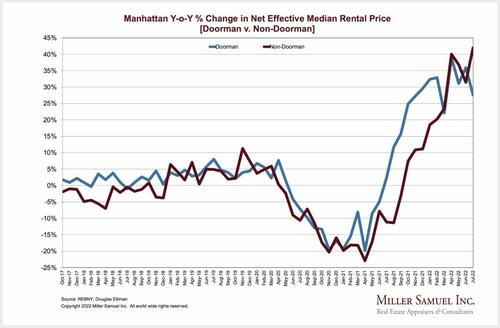 Surging rents over the last year may have pushed some New Yorkers to the proverbial edge. Bloomberg interviewed one Manhattanite who locked in a $3,495-a-month studio on the Upper East Side.

Kelly Stamps, 26, had to raise her budget a whopping $800 to just afford a tiny studio after being overrun in fierce bidding wars to secure an apartment over the last six months.

“I was crying over an apartment and considering moving to Boston.”

Douglas Elliman agent Max Kotler said, “people doing whatever it takes” to get into a rental, even if it means offering well above ask. He said one of his clients lost out on an $8,500 a month Greenwich Village apartment to someone else that offered $13,000.

Scott Gunzenberger, 30, left his Upper West Side one-bedroom after locking in a pandemic rent deal in 2020 of $3,075 a month. He said his contract was up for renewal, and the landlord offered him a new lease for $6,000.

Gunzenberger, outraged by the doubling of rent, said:

“It was an absolute absurdity. I understand there’s a market for it, but it doesn’t seem to be worth it when that’s how much a monthly mortgage could be.”

And for another absurd chart of just how out of control rent prices are across the US, Jan Hatzius, chief economist at Goldman Sachs, showed clients the firm’s inflation tracker that suggests even more rent inflation is ahead. 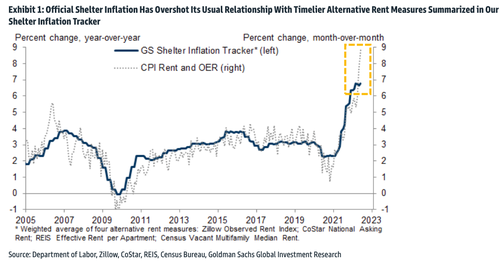 The biggest takeaway is rent inflation is absolutely out of control. And it’s only a matter of time before the Biden administration starts touting rent controls ahead of the November midterm elections.

Perhaps all those millennials who moved out of their parent’s basements because of pandemic deals two years ago could wind up back in the basement after landlords slap them with a rent hike.