US Approves Of Ukraine Striking Crimea 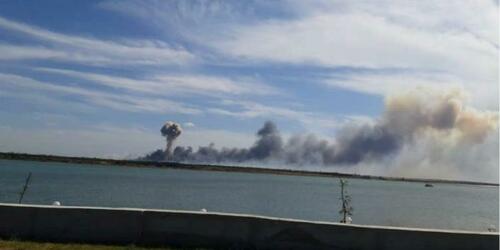 Authored by Dave DeCamp via AntiWar.com,

A senior Biden administration official told Politico this week that the US supports Ukraine striking Crimea, which Russia has controlled since 2014 but neither Washington nor Kyiv recognize as Russian territory.

The comments came after a series of explosions at Russian military facilities in Crimea, including a major one at the Saki air base that reportedly destroyed nine Russian warplanes. Officially, Kyiv hasn’t taken credit for the incidents, but Ukrainian officials have strongly hinted at Ukraine’s involvement.

While the recent incidents appear to be acts of sabotage, Ukrainian officials have said they are preparing to use US-provided weapons, such as HIMARS rocket systems, to attack Crimea. Washington doesn’t want Ukraine using US weapons on Russian territory, but Crimea appears to be fair game since the US considers it Ukraine.

When asked by Antiwar.com if the US ban on Ukraine using US-provided arms on Russian territory applies to Crimea, the State Department replied, “Crimea is Ukraine”.

US-backed attacks on Crimea risk provoking Moscow, and Russian officials have made clear that they will view such operations as a major escalation. Former Russian president Dmitry Medvedev, who currently serves as the deputy chair of Russia’s security council, warned in July that Ukrainian attacks on Crimea would mean “doomsday” for Ukrainian leadership.

Medvedev also said the fact that Ukraine and NATO nations don’t recognize Crimea as Russian is a threat to Moscow. “If any state, either Ukraine or a NATO country, thinks that Crimea is not part of Russia, it is a systemic threat to us,” he said.