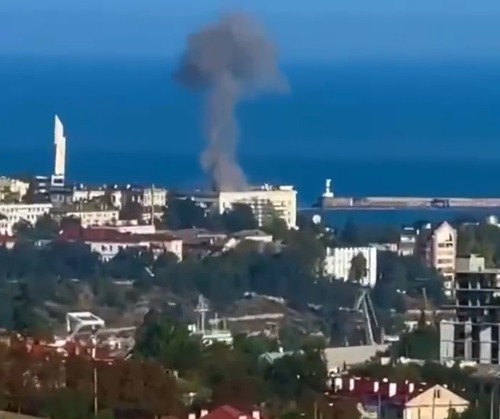 Governor of Sevastopol Mikhail Razvozhayev has confirmed that a Ukrainian drone has crashed into the headquarters of Russia’s Black Sea Fleet in the Crimean port of Sevastopol on Saturday morning, in what looks to be the clearest indicator yet that Ukrainian forces are ramping up offensive actions against the Russian-controlled peninsula.

Al Jazeera and other international media are describing that “A drone has been shot down over the headquarters of Russia’s Black Sea Fleet in annexed Crimea – the second such attempted attack in less than a month.” In a Telegram message, Razvozhayev said the drone crashed into the roof of a building, catching fire. While some initial reports are conflicting, it’s clear that the drone slammed into a building at the Sevastopol port.

No casualties were reported in the Russian statements; however, coming after the major Novofedorovka Saky Airbase explosion of Aug.9 and a string of other alleged attacks and “sabotage operations” deep in Russian territory, this certainly signifies a new escalation in the war.

Videos from before and after the UAV crash are circulating online, with some Ukrainian channels suggesting it was a “suicide drone” – meaning it intended to crash into a target. It’s unclear whether Russian anti-air defenses were active. Video footage suggests small arms fire engaging the drone from the ground, however.

#Ukraine: A suicide UAV struck the Russian Black Sea Fleet’s headquarters in #Sevastopol– It looks like the same kind of modified Chinese commercial drone that used to strike the oil facility in Rostov in June.

It is unclear what air defense was doing. pic.twitter.com/AtJIOLiOJd

Reports are still conflicting over whether it was “shot down” or intended to crash into its target.

Another Crimea official, Oleg Kryuchkov has said on Telegram that “attacks by small drones continue” in various towns across Crimea. He is urging civilians to “remain calm.”

“The goal is not military but psychological,” he wrote. “The explosives are minimal and not capable of inflicting significant harm.”

This includes reports of anti-aircraft activity in the Crimean capital, Simferopol, as well as the western town of Yevpatoria and the southern town of Bakhchysaray – all on Saturday.

Ukraine-linked media accounts suggested that attacks on Crimea by US-supplied HIMARS attacks could come next, though it’s unclear if Washington has as yet transferred rockets with a long enough range to reach deep into Crimea…

The video allegedly shows the moment when the drone flew over the temporary occupied #Sevastopol. It can be heard firing small arms fire at it.

Is the air defense system going to wake up today? HIMARS, use the moment 😏. pic.twitter.com/iAmeEjYvpZ

So it seems Ukraine’s forces now taking up President Zelensky’s call to “liberate” Crimea, given the intensifying assaults of the past two weeks:

On August 19, Russian air defenses were activated in the eastern city of Kerch, which is the terminus of the Crimea Bridge (also called the Kerch Strait Bridge), a high-profile, $4 billion project to link the occupied Ukrainian region with the Russian mainland. No damage to the bridge or the city was reported in the incident.

Ukrainian officials have avoided publicly claiming responsibility for the explosions, but an unnamed senior Ukrainian official was quoted in The New York Times as saying an elite Ukrainian military unit operating behind enemy lines was carrying out at least some of the attacks.

On August 10, Zelensky said in a Western media interview, “Crimea is Ukrainian and we will never give it up.”

“This Russian war against Ukraine and against the entire free Europe began with Crimea and must end with Crimea – with its liberation,” Zelensky said. “Russia has turned our peninsula … one of the best places in Europe, into one of the most dangerous places in Europe.” Of course, this means the possibility of a negotiated settlement now seems more distant than ever, given Russia has viewed attacks on Crimea as a huge escalation requiring a response.