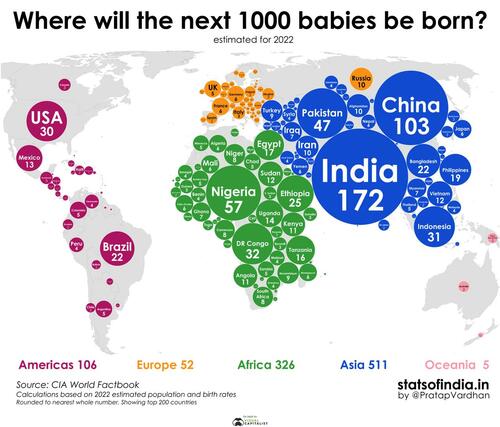 Every four minutes, approximately 1,000 babies are born across the globe. But in which countries are these babies the most statistically likely to come from?

Using data from the CIA World Factbook, Visual Capitalist’s Carmen Ang shows this this graphic by Pratap Vardhan (Stats of India) that paints a picture of the world’s demographics, showing which countries are most likely to welcome the next 1,000 babies based on population and birth rates as of 2022 estimates.

Considering India has a population of nearly 1.4 billion, it’s fairly unsurprising that it ranks first on the list. Of every 1,000 babies born, the South Asian country accounts for roughly 172 of them.

It’s worth noting that, while India ranks number one on the list, the country’s birth rate (which is its total number of births in a year per 1,000 individuals) is actually slightly below the global average, at 16.8 compared to 17.7 respectively.

China, which comes second on the list, is similar to India, with a high population but relatively low birth rate as well. On the other hand, Nigeria, which ranks third on the list, has a birth rate that’s nearly double the global average, at 34.2.

Why is Nigeria’s birth rate so high?

There are various intermingling factors at play, but one key reason is the fact that Nigeria’s economy still is developing, and ranks 131st globally in terms of GDP per capita. Further, access to education for women is still not as widespread as it could be, and research shows that this is strongly correlated with higher birth rates.

While there are hundreds of thousands of babies born around the world each day, it’s worth mentioning that the world’s overall population growth rate has actually been declining since the 1960s.

This is happening for a number of reasons, including:

This would increase our global median age even further, which poses a number of economic risks if countries don’t properly prepare for this demographic shift.