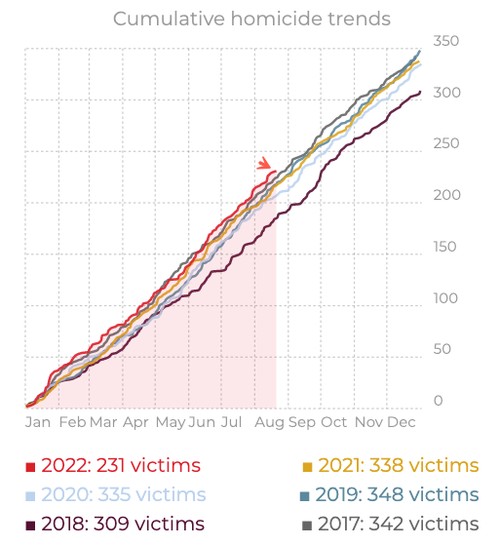 Baltimore City reached 231 homicides since the start of the year and is on pace for a possible record year of murder.

Just an hour north of the White House, the Democratic-controlled metro area is in ruins with no signs of waning violence as President Biden’s ‘unity in America’ has died.

Newly elected Baltimore Mayor Brandon Scott has blamed everyone from the media to gun companies for the worsening violence.

The 38-year-old politician announced a year ago that his five-year plan would reduce violence, though the plan could be a massive failure this year as the current rate of homicides is above a five-year trend, implying 300 homicide level could be reached as early November with the possibility of a record number of murders (if the pace continues) at the end of the year.

If the dreaded 300th homicide level is breached later this year, it will be the eighth consecutive year.

Democrats have controlled Baltimore for more than half a century. The failure of Baltimore as a city should be directed at those with progressive policies and ideas about policing and operating a city.

But there is a glimmer of hope for the city: Baltimore state’s attorney Marilyn Mosby, who aligned herself with radical criminal justice reformers, just lost in the Democratic primary. She acknowledged a federal investigation into her finances cost her the election.

Mosby was the youngest chief prosecutor of any major US city and was sworn into office in 2015. Ever since she retained her position, homicides and violent crime surged.

“I’ve been focused on getting the leadership in Baltimore to take it more seriously. I hope they develop a real crime plan and start arresting more, prosecuting more and putting them in jail,” Hogan said.

Hogan’s directed blame on leadership makes perfect sense since Mosby’s controversial “no prosecution policy” for drug possession and prostitution has backfired by making the city even more dangerous as criminals run free as those in San Francisco.

Scott might need to tweak his crime reduction plan or face the wrath of Hogan or even voters. This comes as a civil rights organization (Randallstown’s chapter of the NAACP) in a suburb in Baltimore County requested the governor to declare a “public emergency” and deploy the National Guard to the city to quell out-of-control violent crime.